Our Changing World for Thursday 5 November 2009 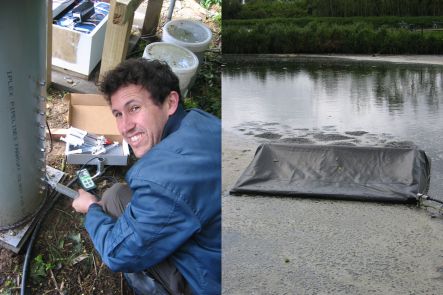 Chris Pratt measuring gas at the biofilter; and the biofilter cover on the effluent pond (image: Landcare Research)

Adrian Walcroft, Kevin Tate and Chris Pratt from Landcare Research are working on biofilters which use bacteria from volcanic soils to convert methane into carbon dioxide. Called methanotrophs, the bacteria eat methane, producing water and carbon dioxide in its place.

While CO2 is itself a greenhouse gas, methane is far more potent, so the biofilter rests on the idea that converting methane into CO2 reduces the greenhouse warming potential of the methane by more than 20 times.

The scientists have set up an experimental biofilter on an effluent pond at a Palmerston North dairy farm and they took Ruth Beran to see it.

Social insects such as ants, wasps, bees and termites live together in large related groups, and have particular jobs. Think of a bee hive, with the queen responsible for producing all the eggs, while her daughters, the worker bees, forage for food and defend the nest. Evolutionary geneticist Ross Crozier, from James Cook University in Australia, is interested in how this social behaviour evolved, how it works at a genetic level, and the particular role of the 'anarchy' gene, which causes a bee colony's social structure to collapse.

Ross Crozier was awarded the inaugural Hamilton Award for research in social insects by the International Union for the Study of Social Insects in 2006. The Hamilton Award is named after New Zealander Bill Hamilton who was instrumental in coming up with the concept of kin selection in the 1960s. Ross Crozier was in New Zealand earlier this year at the Bioed Darwin conference, and he pointed out that his fascination with the evolution of social behaviour in social insects such as bees was one shared by the great evolutionary biologist, Charles Darwin. 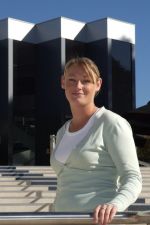 Food allergies are on the rise in the developed world, and currently the only treatments for allergy sufferers are either avoidance of the foods that cause the allergy, or management of the reactions once exposure has already occurred.

But what if the current thinking about allergies is wrong? For example, what if allergies are not caused by exposure in the gut to particular foods as a baby, but via the skin instead?

Elizabeth Forbes (left) from the Malaghan Institute of Medical Research is one of the scientists trying to understand what causes allergies, and she explains to Ruth Beran what she is testing, and also some of the controversial theories that currently exist about allergies.

Just up-river from the famous Pupu Springs in Golden Bay there's a small historic hydroelectric scheme, the Pupu hydro scheme. In the 1980s, two local men set up a community group to restore the abandoned scheme, which has been supplying electricity back into the local grid since 1987. 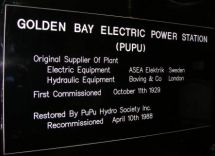 Alison Ballance met Teri Goodall (above left), one of the founders of the project, and Anthea Whitlock, representing a lobby group called REFIT, to talk about the Pupu hydro scheme, as well as the bigger picture of distributed power generation, and the role feed-in tariffs could play in encouraging investment in small-scale renewable electricity production. A feed-in tariff (or FIT) is a government legislated policy. It guarantees a fixed premium price over the retail rate, payable to any person or organisation who generates renewable electricity and feeds (sells) it into the national grid or local electricity network.