One in Five meets Thane Pullan – a rising star in stand-up comedy who does his gigs sitting down and makes comic fodder of the fact.

Thane uses a wheelchair and voice technology to deliver his routines which have earned him a spot in next month's Raw Comedy Quest Grand Final in Auckland.

He talks to Katy about comedy gigs, heckling and why political correctness and his own disability are often the butt of his jokes. 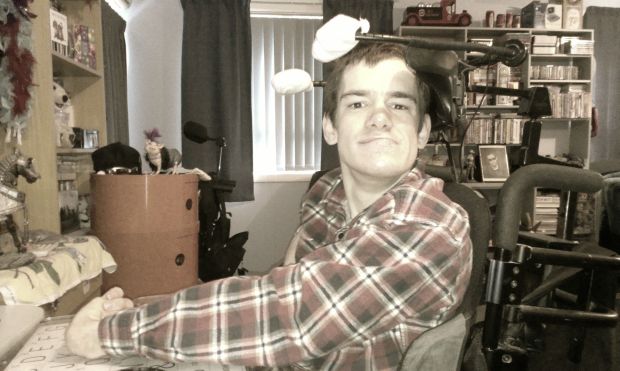 "Does this wheelchair make my butt look big?"

No, but even if it did, chances are it wouldn't bother Thane Pullan.

The Christchurch man is forging a name for himself as an up and coming stand up comic but delivers his gags sitting down.

He uses a wheelchair and voice assisted technology to play out his routines and the butt of his jokes is, more often than not, his own disability.

He also targets political correctness, politicians and anything else that captures his interest.

"Sometimes I sit for hours and only come up with eight lines, sometimes things occur to me randomly throughout the day and I write it later, sometimes I get ideas from people. It's not writing jokes that is difficult, it's the actual subjects of the jokes that I sometimes draw blanks on. Initially most lines were about my disability but I am trying to branch out as much as I can, especially considering I want to do longer shows.

Thane says he'd been writing comedy on websites for about five years when he got asked to enter a stand up competition and his humour was soon winning over Christchurch audiences.

His growing popularity comes after a mixed result at his first show.

"It was a disaster, because I didn't have a system to pause and people were laughing too much, which as a comedian, that's the best possible problem. I was feeling fantastic after it was over. Wait, didn't I say it was a disaster? The technical side was a disaster, the rest was great. I fixed the pausing problem by programming an application that I can use to pause."

While Thane is pleased to have gained a following, he regrets that he doesn't get heckled.

"No, and that's boring. I can't heckle back, otherwise I totally would and it would be a heckle fight. I would totally crush my opponent."

Now his brand of humour has earned him a place in next month's Raw Comedy Quest Grand Final after he fought off tough competition in the regional final.

"I treated it as a regular gig. I discounted any hope of winning, I was just happy to perform. I have a different attitude for the finals. If I am going to Auckland. I may as well try to win. But I think keeping a reasonably cool attitude is still worthwhile. I am going to test things at a few gigs and take it from there. It's important that I put on good shows all around but have the best stuff at the finals. Fingers crossed, oh, that's right, I can't."

The Raw Comedy Quest Grand Final is on May 11 in Auckland.