They call themselves 'Acting Up' - to get away from the Down syndrome tag. And their show 'The Dream Working' is the culmination of many months of work.But now the performance is done. And a few days later at the Alpha street artbase, it's time to debrief and luxuriate in a show well received.

An audience of more than 200 adults and children packed into the Newtown Community and Cultural Centre in Wellington on Saturday 18 October to see the pioneering performance of The Dream Working by Acting Up Special Stars.

The show was the first Wellington production in which all the cast members had learning or intellectual disabilities. Devised with members of the Wellington branch of Acting Up Special Stars, it was the result of two years of regular drama and music sessions with the group.

Director Madeline McNamara describes the project as a big, wonderful experiment - partly improvised, partly structured. "Throughout the process, we encouraged the cast to be autonomous. It was also a chance for the audience to experience something special.
"The most wonderful thing was seeing the cast share a new theatrical culture with their audience, breaking some conventions and inventing new ones. I loved the freedom they had to work with the audience. There was sheer magic and moments of comic genius."

The show included music, dance, drama, comedy, clowning and audience participation. There was also an exhibition of artwork, created at the Alpha St Idea Services Art Base and inspired by the characters that each actor plays in the show.

Acting Up programmes offer ongoing access to a range of performance opportunities for people with learning or intellectual disabilities. Over the past two-and-a-half years, similar drama and music training sessions have been offered to groups in Lower Hutt and Kapiti Coast.

Acting Up artistic directors Madeline McNamara and Andreas Lepper created the The Dream Working project with co-direction by Jo Randerson, and tutoring and training assistance by Noel Meek. The costumes were designed by Janet Dunn. 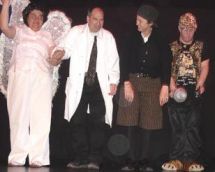 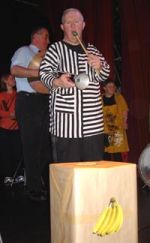