On the viewing deck at the Arataki Visitor Centre in Auckland’s Waitakere Ranges, musician Riki Bennett is making sure those flutes are being heard again. 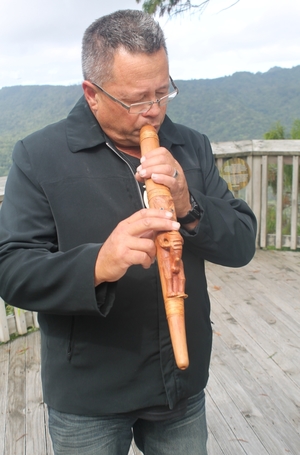 Riki (and master carver Rewi Spraggon) are holding a workshop here on Taonga pūoro, the traditional Māori instruments on 10 April as part of the 2016 Titirangi Festival of Music. The workshop is one of three that day, the other two covering Classical Indian music and the human voice in Gaelic/Celtic music.

“A few years ago, we ran a musical night called Ancient Sounds [with music] from a lot of indigenous musicians from around the world.  This actually just starting [it] again. Well, hopefully!”

Riki points to the multicultural face of Auckland as evidence for the necessity of such workshops. Music, he says, is universal.  “You may not understand the language being sung but everyone’s got hearts. It’s from heart to heart, really.”

Taonga pūoro are divided into different whanau of instruments and range from the percussive poi, to gourd, stone and wood instruments that are struck, shaken or tapped, to the wind–based flute like instruments Riki demonstrates to me.

While their use was once central to Māori life, after European settlement of New Zealand and the spread of Christianity, the use of Taonga pūoro declined and they were often replaced by European instruments.

In the early 1990’s Ngāi Tūhoe composer Hirini Melbourne, carver Brian Flintoff and jazz musician Richard Nunns came together to research and play Taonga pūoro and began what grew into a widespread revival of the traditional instruments. Since that time, Taonga pūoro can be found in many recordings and compositions and in film and television soundtracks. 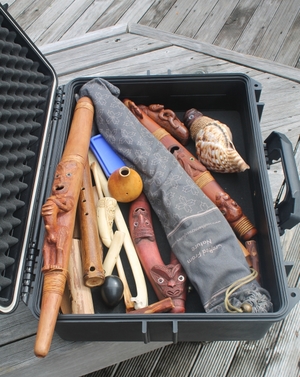 Riki received his training on Taonga pūoro from Hirini Melbourne. Nowadays he teaches other people how to play and sometimes make them. Despite the healthier state of things for the instruments, Riki believes we cannot take that for granted.  “We’re in a period of time that if we don’t keep things alive, they’re going to die out.”

Riki shows me first of all a Putorino made from Kauri, lashed together with Kiekie vines and coated with Kokowai (red ochre). The carving on it represents Tamatekapua, the captain of the Te Arawa waka that landed in the Bay of Plenty region.  “That’s where I whakapapa to.”

Many of the materials used in the construction of the Putorino can be found in the Waitakere Ranges behind us. Riki tells me that there is an old belief that harvesting fallen trees and turning them into instruments restores their wairua (spirit) to them and returns the tree to life.

The workshop will be a demonstration of the sounds and whakapapa of Taonga pūoro and for practical reasons won’t teach attendees how to play or make them (“that takes all day” says Riki). Over the Matariki season there will be several other workshops exploring Mātauranga Māori or Māori knowledge systems. For Riki Bennett and others like him, the key is to keep the conversations happening.

“Through study and research, we’re trying to bring all this alive and keep it alive. But it’s actually about sharing knowledge. Not only with the Māori community, but with everybody. “