A giant cave on Auckland’s wild West Coast used to be the city’s most memorable - and most mysterious - ballroom. Dances were held for more than 60 years at the Great Cave at Whatipu but are now just a memory. Cartoonist Dylan Horrocks captured it all in a billboard commissioned by the Waitakere City Council. He talks to Justin Gregory about the legend of the Whatipu Cave Dances. 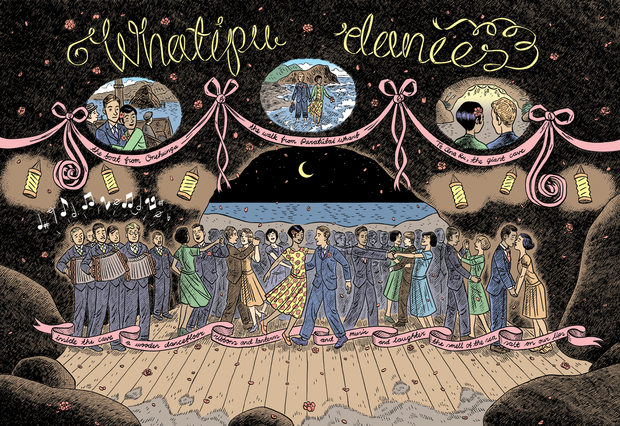 The Legend of the Whatipu Cave Dances by Dylan Horrocks. Photo: Supplied

It feels like a strange, magical cave with secrets and wonders.

They came on horseback over the hills from Karekare and by ferry from Onehunga. They walked in their best party clothes for more than a kilometre, from the jetty across sand and rock and through bush. For nearly a century young people came to dance at the great cave at Whatipu. An accordion band provided the music as couples danced, laughed and sometimes disappeared together into dark corners of the cave. 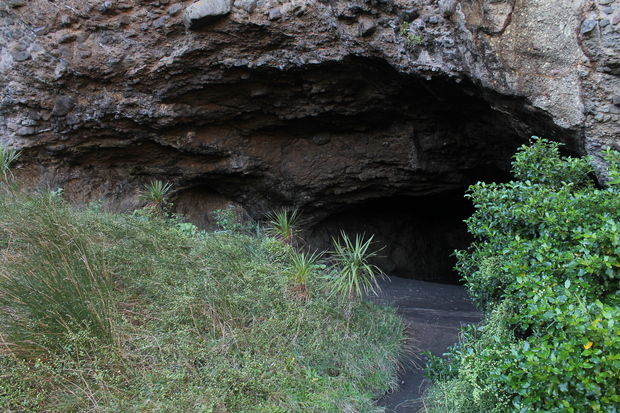 Called Te Ana Ru (and also known as The Ballroom), the cave is a 20-minute walk from the carpark at Whatipu. It looks out over the Manukau Harbour and sits on what was the eastern slope of the giant Waitakere Volcano, a 50-kilometre monster that has now mostly eroded away.

Maori used the cave as a place of shelter in pre-European times, and when settlers began logging kauri in the 1860s, they took advantage of its wide open spaces and high ceiling to get together and celebrate.

In 1901 a young girl calling herself E.D.N.A wrote a letter to the children’s page of the Otago Witness, describing her home at Whatipu:

Our homestead is situated in a valley on the West Coast near the Manukau Bar. It is a very isolated place.

Rough rocks are to be seen jutting out into the sea, some of which are entirely surrounded by water. Just imagine, Dot, how grand it is to see the angry waves dashing against the rocks and falling in white spray.

A short distance round our beach are some very large caves; one is so large in fact that my brothers put a floor in it, so that we could be able to have a dance. I suppose you will smile at the idea of dancing in a cave? But when it is lit up with coloured lamps and decorated with ferns it looks better than any ballroom.

E.D.N.A would have lived at the Gibbons Homestead, part of a complex of buildings now known as Whatipu Lodge. Mill manager Nicholas Gibbons built the homestead in 1870, and nearly 150 years later his descendant Bruce Harvey is an expert on the area. In fact, when his mum and dad met in the 1920’s, it was at one of the Whatipu cave dances.

“He’d ride down from Karekare to court my mother. There were three quite pretty women at Whatipu Lodge – those were my aunts and my mother – and they were like magnets for the local chaps.”

Bruce says it was in the relaxed, post-World War One period of the 1920s that the dances in the cave really became popular.

“The young folk would come from Onehunga by boat on the Saturday afternoon. They’d have this wonderful dance, and then they got so tired by about 3 o’clock in the morning they’d go back to Whatipu Lodge (to sleep), then wake up to catch the boat back to Onehunga the next day. They must have been quite jolly times.”

Regular ferry rides from Onehunga to dances in the cave continued until the 1950s before falling out of fashion. Twenty years later the dances were briefly revived to raise money for local schools.

Wayne McKenzie is the current manager of Whatipu Lodge and has family connections to the Waitakere region dating back to the middle of the 19th century. His mum was at one of those dances in the early 1970s and he has a newspaper clipping describing the event. The photo that accompanied the article was later turned into a painting by a family friend.

For 20 years the caves were quiet until a series of dance parties were held there in the 1990s. In 2009, Auckland band An Emerald City decided the cave was the perfect place to record their debut album, Circa Scaria. They lugged all their gear in by hand and for two days played, recorded, ate and illegally slept under its roof. Band member Ede Giesen says they knew within moments of arriving that they had chosen the right place.

“We set up our stuff and the drummer kicks his kick drum and it went ‘boooooommmmmm!’ right through the cave. We all just looked at each other and went, ‘This is going to be amazing!’”

Cartoonist Dylan Horrocks first heard about the Whatipu cave dances when he was commissioned to create a billboard celebrating the stories and legends of the Waitakere Ranges. He grew up in West Auckland and knew the cave well, but had heard nothing about this part of its history.

“I had this wonderful image immediately of the cave at night on the beach, with lanterns inside and music playing and people dancing. To me it felt like suddenly discovering that there was a hidden magical castle in this place that I knew from growing up.”

While Bruce Harvey imagines the dances as jolly occasions, Dylan believes they were much earthier.

“It would be a little out of control. The wild surf out there immediately makes you feel like you’re part of something much older than civilisation. I imagined people slipping off into the darkness and making out in the dunes, and the trappings of civilisation being a little looser.”

Dylan Horrocks original billboard now hangs in the New Lynn Community Centre. He is still sometimes contacted by people who see it and have stories to tell about the Whatipu cave dances.

“It’s clearly a little moment in our history. The ghosts of many dances past and probably all sorts of romances linger in that cave. It’s a very special place.” 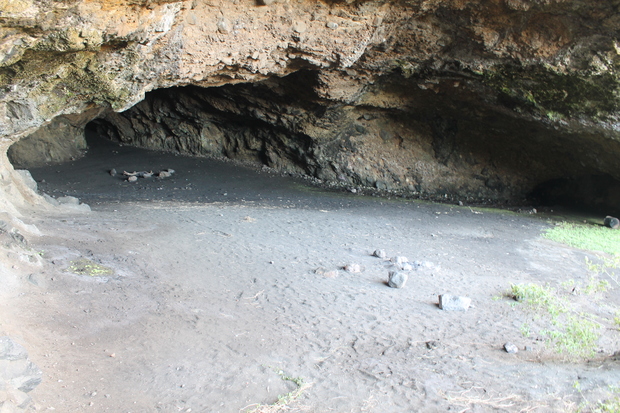