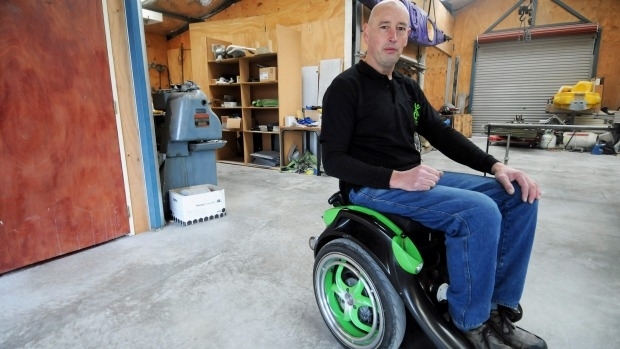 More about the Ogo

Although wheelchairs have been around in one form or another for thousands of years, it wasn’t until the 1950s that the electric wheelchair was invented. And we have WW II to thank.

Canadian mechanical engineer and inventor George Klein was born in Ontario in 1904, and although he never excelled academically he went on to become Canada’s most celebrated inventor. He worked from 1929-69 at the National Research Council where he came to specialize in diverse areas like gears, nuclear technology and the mechanics of snow.

Amongst his inventions – the first microsurgical staple gun, an international system for classifying ground-cover snow, skis for aircraft, and the Canadarm, a remote-controlled mechanical arm for the space shuttle – which has been in use since 1981 for repairs and launching and retrieving satellites.

And of course the electric wheel chair. Although other electric chairs were made before this (as early as 1912), they were mostly one offs with considerable design flaws. This was the first to go into mass production in Canada and the US. The Canada Science and Technology Museum calls it "one of the greatest artefacts in the history of Canadian science, engineering and invention for its innovative controls, ease of operation, flexible drive system and dependability."

George Klein’s design was refined and improved over the decades, but some of his innovations are still used on modern chairs - and further afield – like the joystick. Honours followed: In 1968, he was made an Officer of the Order of Canada, he was posthumously inducted into the Canadian Science and Engineering Hall of Fame.

Before he died in November 1992 he was quoted as saying, “It was wonderful to have been at the lab because it was fun. Serious fun.”

The Mobility Scooters Otago website has a history of wheelchairs dating back to the 6th century, and their photo collection is fascinating.