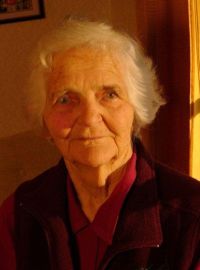 “How strange I felt that I, a young New Zealand woman in my mid-twenties, and used to mainly smaller town living and working, should find myself arriving at Whenuapai airport in West Auckland to board an RNZAF plane to fly, 1947 style, to China.”

Twelve days later on the 13 December 1947, Nurse Isobel Thompson arrived in the great expanse of Shanghai, touching down in a ‘Skymaster’ (four engined, with two hostesses, carrying 43 passengers) – to a dark, strange city, hearing only an unknown foreign language. And so began her two-year appointment in China with CORSO, Isobel was just 26. 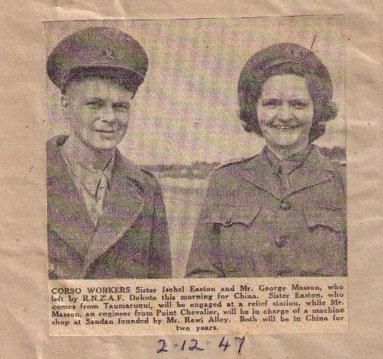 When World War II drew to a close, there was a groundswell of support for a coordinated New Zealand approach to help deal with widespread suffering and poverty in countries around the world. Some 30 groups joined together to form the country’s official relief body, CORSO (Council of Organisations for Relief Service Overseas).

Post-war China was in dire need of help, still reeling from the Sino-Japanese invasion and in the throes of civil war between the new Communists and the old Kuomintang forces. Madame Sun Yat-sen (Soong Qing Ling) herself specially appealed to CORSO for qualified medical staff to work in the International Peace Hospitals.

Conditions were “primitive”, it would require working in poverty stricken areas with very basic medical supplies. Nurse Isobel Thompson was among the first to put her hand up. The New Zealand organisation CORSO arranged for Isobel to travel deep into the interior, Henan and later Shanxi and Shanghai.

Born, Isobel Thompson on the 18 March 1921, Isobel was the second of five children. Her childhood was adventurous with her civil engineer father working mostly in Wairoa, Whanganui and Wellington. When the 1931 Napier earthquake struck, 9 year old Isobel was at school in Wairoa. She made her own way home to her family, clearly a hardy young survivor. Isobel’s career as a nurse took her to Danniverke Hospital for training from 1941-1945.

In 1947 when Isobel responded to China’s appeal, it was on the eve of the Cold War, Communism was held in suspicion by the West. But that paled in comparison to the real personal danger Isobel faced from Kuomintang forces during her travels. In order not to be wrongly captured and imprisoned she needed to carry an identity document at all times:

“Before my departure from Shanghai, the Chinese Welfare Fund’s Chairman Soong Ching Ling has given me a signed letter addressed to senior officers of the military, civil, police and para-military authorities of every district. This I carried always on my person until at my International Peace Hospital ...”

In a brief extract from a lecture given to new nurse trainees Isobel writes:

TO PREVENT INTRODUCTION OF INFECTION:

“Tues 1 June 1948: Today we visited an institution that cared for people in need, mainly orphans (53). At this time there were 27 male refugees, 17 crippled and blind men, several boys brought from the streets, and also still 13 of the 72 girls who had been prostitutes at the time of the city’s liberation.”

On Isobel’s return from China she travelled around New Zealand giving public talks about the realities of the newly liberated People’s Republic of China. It was during one of these talks that Isobel met her future husband Eric Thompson. They married in 1952. Isobel and husband Eric Thompson were Quakers, dedicating much of their life to humanitarian causes.

New Zealand lost a quiet legend on the 2nd of June, when Isobel Easton-Thompson passed away at the age of 93. I’m on the line to Auckland hearing from two people who knew Isobel, particularly for the work she did in China as a nurse. The Consul General of China, Mr Niu Qingbao and Broadcaster George Andrews are full of praise for their late friend, a woman whose altruism earned her a household name in China. 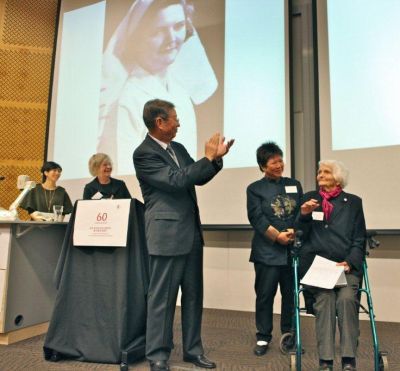 In 2012, at the 60th anniversary of China’s liberation, George tells me that Isobel attended and gifted a book to one of the visiting senior Communist Party Members, this man insisted on giving her a standing ovation in recognition. George Andrews says you never find out about how much mana one has until they pass away. Isobel’s funeral was standing room only, packed with many from across the globe, paying tribute to one of our quiet legends.

Consul Niu describes how Isobel learned to speak and write Chinese during her time in China, something that deeply impressed him when they met some 40 years later in Auckland. Consul Niu speaks of how delegations from China would not be complete without making a personal call to this deeply respected woman at her home in Ellerslie. In spite of the gravity of aging, she was always a remarkably cheerful and kind hostess, a woman who may not be a household name here, but is definitely remembered by so many in China.