US women seeking abortions are warned to watch what they google

Women in the United States are being warned against using menstrual tracking apps or even googling ‘abortion’ in the wake of a leaked opinion which suggests a landmark legal protection could be overturned.

Any decision is not final until it is published, likely to be in June. 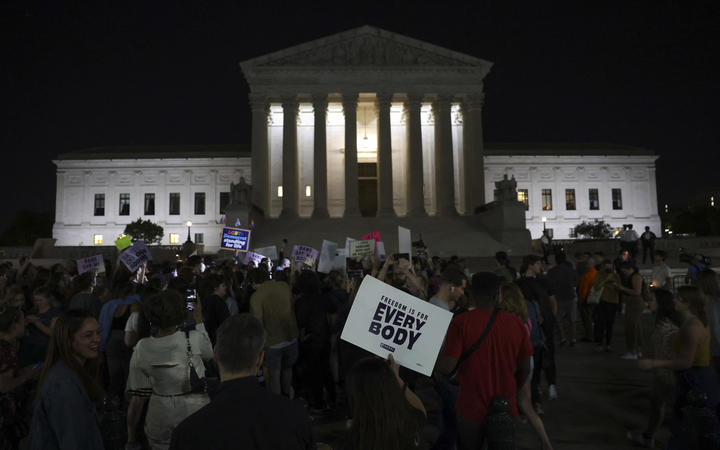 Pro-choice and anti-abortion activist rally outside of the US Supreme Court on May 03, 2022 in Washington, DC. Photo: 2022 Getty Images

But it's prompted fears about what such a fundamental legal change would mean - not just in terms of abortion access - but for how technology may come into play.

Nikolas Guggenberger, executive director of the Information Society Project at Yale Law School, says the major concern is that digital traces, which we leave when using our devices, can be used as evidence against anybody involved in seeking or providing abortion.

“All the leak did is it really sparked public debate, but legally, technically speaking it hasn't done much, what it has done of course, it has changed the political economy in which everybody operates.

“It has energised the anti-abortion base and it has triggered the imagination of conservative lawmakers to pursue what they might have only dreamed of pursuing before.”

States are pursuing various versions of abortion laws, with about half expected to severely limit access to abortion if Roe V Wade is overturned, he says.

In one case in Mississippi four years ago, prosecutors used a woman’s search history to argue a woman committed second degree murder after an at-home pregnancy loss.

Guggenberger says although the case was not centred on abortion, using search history is a horrendous method to prove a case.

“Searching for abortion is something that's completely legal and something that nobody should be deterred from doing. And second, there is just no direct or even causal link between a search for access to abortion and any motive or any intent for killing a born child.”

Daly Barnett, who is a technologist at the Electronic Frontier Foundation, says there are many ways how our digital footprints can lead back to us.

“There are individual identifiers on the device itself. There could be also things like the apps that have location permissions or the cell companies perhaps like your mobile phones are pinging anywhere that you go, there's all the third-party tracking that takes place online, etc.”

Not only do apps and phones present a risk of tracking, but also a US media outlet showed it was possible to buy location data that could identify groups of people who visited a clinic that offered abortion services.

The reach of the data-brokering industry is huge and not as regulated as it should be, Barnett tells Nine to Noon.

“Data brokering is a massive vampiric industry. There are advertisers, trackers, others, any sort of third-party that wants to profiteer off the invasion of Internet user privacy.

“There's all the really big players like Google, who happens to have trackers on 75 percent of the top 1,000,000 websites, there's Facebook and then of course there's always like lesser-known companies like Criteo or others.

“So all of these companies they collect data, they run data, they buy it from others, they embed trackers on websites, they're monitoring users’ behaviour online, and then all of that is gathered, distributed, regathered, computed, re-packaged and just sold to whoever has got the money to buy it.”

Although there are organisations that help people minimise their digital footprint, Guggenberger says people seeking abortion won’t be in the state of mind to worry about this.

“If we look at general consumer behaviour online, we already see that people are just not able to meaningfully protect their privacy, and thus we shouldn't expect that people are able to do that in an enormous situation of stress.

“While of course all those attempts to provide alternative solutions are laudable in these dire times, we can't expect that to solve the problem.”

It also brings into question the fundamental right to privacy as the repercussions of the Supreme Court’s impending decision go beyond abortion and may impact other liberties, he says.

“This will be one more instance and probably the most powerful example of why we need solid privacy protections.

“I mean, if it isn't for this, what is a possible argument that we need a strong federal privacy law? And it is beyond time to create that.”