Parenting expert Jenny Hale on how to combat sibling rivalry

For some families, being in lockdown together will have felt like an exceptionally long time.

Jenny Hale, a family coach with the Parenting Place, tells Kathryn Ryan she’s hearing more about families struggling with siblings going at each other all day, especially during lockdown.

She uses her book Kind, Firm, Calm and real-life stories relating to children aged between two and 12 to share some tips on sibling rivalry. 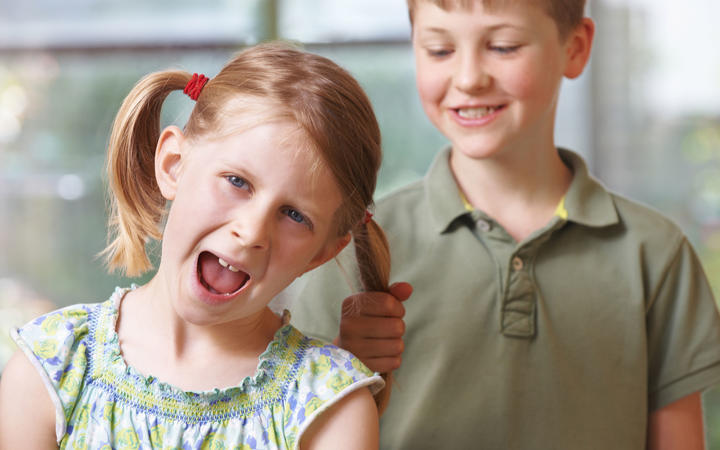 Children are after a few things from parents or caregivers, and when these are in short supply it can trigger them to squabble or fight, Hale says.

"If there's a scarcity of them, often you will see the behaviour disintegrate a little bit or children will be triggered by seemingly very small injustices."

We need to guide children on manners, sharing, and patience, because these don't come naturally, she says.

"I think sometimes we expect kids to get on with it and sort it out, but it takes a long time for children to work well together, so I think our expectations have to be tempered and fair so we're really guiding our kids to get on with one another long term.

"So if we're not snatching each other's toys that's because we take turns or we have a turn then we look to see if our sibling would like a turn."

With lockdown, we're forced to spend a lot more time together. Hale recommends giving each child some alone time, so they have a bit of reprieve and time to reset.

You can also minimise their intolerance of each other by refilling their emotional tank, she says.

"I've suggested for instance that a parent takes one child out at a time for a one-on-one date.

"And we're restricted but it's possible sometimes to have 20 or 30 minutes with one child where you're reading to them or you've taken them out to get a takeout coffee, or something like that, and you're able to really just centre in on that child.

"Because children are asking the question, do I matter to you? Do you see me? Do you enjoy me? Do you like my company? And when we can answer that with a resounding yes and saying that's why we're having that date ... this can really help children tolerate the stresses of being with one another day after day."

It can also be an opportunity to ask the child about any worries they have about your treatment of them, she says.

"You take what children say with a grain of salt but you're also aware of 'maybe I have been focusing on one child because they irritate me more, and I need to be fairer in my approach'.

"Because there isn't anything more toxic to a child than feeling like they're the one that you are always correcting, always growling, always cross with and always finding something wrong with."

If you feel like you're falling into this habit, Hale says expand your bandwidth and acknowledge the traits which you may deem to be negative.

"So maybe this other child looks like they're bossy but then you decide maybe in that bossiness they're actually a really good organiser and they're great at making rules and ... instead of being fussy, maybe they're really particular."

The difference in personalities among children may mean we're more aware of the dominance of one child over another, she says.

"I suggest to parents to sit down and watch children for a while ... this is where we've got to have our eyes wide open and not always be defending the same child."

And make sure you're not always taking charge of solving problems and give them a chance to find a solution between them, she says.

"Parents use an enormous amount of energy trying to referee, and kids get to that habit of running to a parent for intervention when we can help them start to work stuff out themselves."

For example, if they all want to watch different programs on TV and end up arguing, Hale suggests you first acknowledge the problem with all of them, then tell them the TV is off until they can work it out.

One way to encourages this is to have a 'marble jar' where the children aim for about three collective goals they must work as team for, she says, and then when it's full you celebrate together.

"So they might be working towards speaking kindly to one another, sharing their stuff and asking nicely or respectfully.

"When we really promote teams in families, we can make a lot of progress."