Schools reopening too late for many: principals

Secondary principals in South Auckland say the government's plans for reopening schools will be too late for many of their students.

Students in years 11, 12 and 13 will be allowed back to school in alert level three areas next Tuesday.

Tangaroa College principal Davida Suasua told Kathryn Ryan she was "in shock and disbelief" with the education minister’s announcement on reopening yesterday. 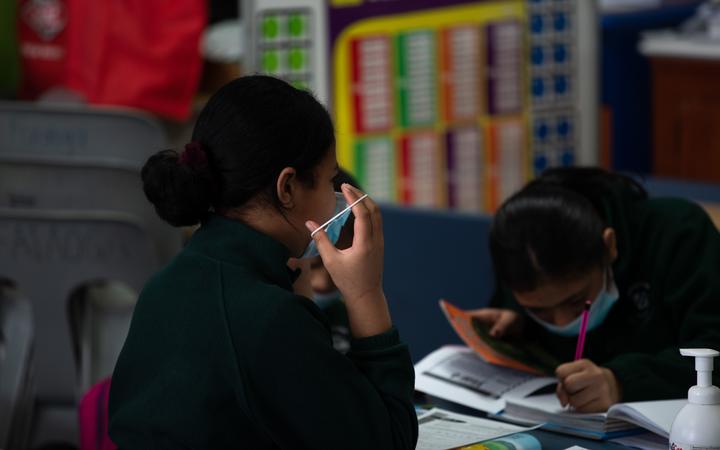 Nearly 40 percent of her Year 13 students were now working full time as essential workers to support their families, Suasua said.

"[High schools have] just been opened, I feel, for exams which serves a certain community and it just highlights inequalities that are actually happening within our system now due to Covid.

"Learning has taken a backseat until we are able to manage to get ahold of where our students are actually at and now this has basically taken their wellbeing out the window and pushed us to make a decision to try and get them back into school now."

Many of the students in employment now had planned to go to university next year, but that is looking unlikely, she said.

"Yesterday afternoon, a couple of our teachers were already talking to some of our students and they said, 'miss, we're not gonna come back, we can't come back now, that means we're gonna have to stop doing work at home or stop working'.

"They said 'we're not coming back, if we have to make a choice, school is not the choice', which is really disappointing.

"In our health science class, out of the 34 students that are there, all but three are not working, so that's alarming."

The school was engaging with employers to think of ways to ensure the students remain engaged to education and learning, she said.

"It's not their first chosen career, but at least it's trying to get them to achieve standards within the workplace to get them to Level 3 certificate NCEA at least, but also to look beyond what they're doing now within that workplace.

"And if they're continuing to learn, they might actually go, 'you know what this isn't me, I'm gonna go back', but if they get stuck in that 'I'm just going to turn up and work and put money and food on the table' and not be ambitious about what they're actually doing, we're going to lose them definitely."

Even for some who don't have employment, the pressure of family responsibility means they have no time other than late at night to finish schoolwork, she said.

"We're logging the times that they're coming onto the Google platform or into the school platform and it's late at night. It's between the hours of 10 and three in the morning, where they should be sleeping."

It's not just the pressure on students though, teachers too have been stressed and upset at the little notice given about the reopening, she said.

"They are stressed about the students that they know are very capable of doing well in these exams, and then possibly not being there when we do return.

"There was no indication whatsoever about returning this fast and this quick, we knew it was gonna come but a heads up would have been preferred to give us enough opportunity to really plan, particularly in a community like mine.

"It really is chaos out there, particularly for these kids, because they're lost and it's going to take a while to actually get back to normal."

After last year's lockdown, the school's roll dropped by 25 percent, and Suasua expects the same this year.

"Even if we do start next year at proper times, the cleanup is going to take at least two years to get the school and get the community confident back into learning and education."

Getting students to return to the classrooms would be another challenge for a community where Covid-19 was prevalent and vaccinations low, she said.

Keeping students in school 'not easy'

"We've been constantly checking in with students and whānau and trying to support in any way we can and then trying as best as possible to keep our students motivated and engaged in their learning, but it's not easy, lots of whānau have got some really difficult challenges that they're dealing with."

Based on last year's lockdown, he did not expect to see more than 50 percent attendance in the first few weeks of students returning.

Jones said he would like to see flexibility around university entrance requirements and initiatives from the government, like paying students to stay in education, to invest in the "future of New Zealand".

"Otherwise, we're going to have a lost generation and I think for the traditionalists, for the people who see it in very different privileged circumstances, I don't think they fully understand the context of so many young people in New Zealand.

"I think this was a missed opportunity to get rid of an antiquated exam system that has no bearing to the future of work."