'Look at moy!' Why Kath & Kim is earning a new generation of fans

It spawned a US remake, a telemovie called Da Kath & Kim Code and even a feature film - Kath & Kimderella. 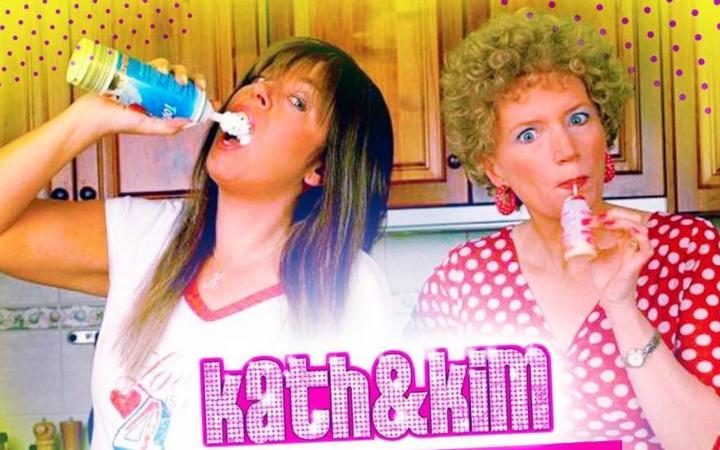 The suburban sitcom was based on the lives of Kath Day-Knight, her "hornbag" daughter Kim and Kim's "second-best friend" Sharon Strezlecki.

But the characters actually came from way back when the actors (Gina Riley, Jane Turner and Magda Szubanski) did Big Girl's Blouse, Arrow says.

"I was completely delighted because I had kind of grown up watching these characters and then kind of watching them have this second life [in Kath & Kim] and introducing my daughter to them has been one of the real pleasures."

The actors' lack of vanity in their comic performances made it appealing for audiences, she says.

"They are prepared to do whatever it takes to get the laugh and they don't have any kind of preciousness about the way they appear on screen.

"Kath is of course very happy with the way she looks, but she sort of often looks ridiculous - she's got the frizzy hair and lime green pants.

"There's something lovely and unguarded, and it is about what you do when you're at home, which is you let your hair down and you don't really worry about what you look like."

Sayings from the show like, "look at moy" became part of the vernacular on both sides of the Tasman and beyond - and the malapropisms were epic - like Kim's "I want to be effluent and practise serial monotony".

Because the 'suburban life' comedy was coming from a place of understanding and experience, it wasn't necessarily offensive to viewers, she says.

"I think people see it as 'come and join my little group and come and laugh with me' rather than 'I'm laughing at you and I'm being mean about you'.

"I do feel like a lot of that is just really well observed comedy of everyday life like we all have those experiences ... I think it's speaking to us."

One of the things that inoculated the show against criticism was the inclusion of the "upper middle class" characters Prue and Trude and their distinct accent, Arrow says.

"The idea of having a couple of upper-class characters that you're also satirising, you're pointing out that Australia does have a class system when you do that.

"Prue and Trude are often quite mean about Kath and I think that makes us feel protective towards Kath.

"They're capturing that very particular accent, they're exaggerating it in one direction, much as they exaggerate Kath and Kim's accent in another direction."

At the time the show was on air, the public was looking to divert away from the troubles of the world, like 9/11, the Iraq war and bombings, and instead focus on themselves, Arrow says.

"At that period, some of the top rating shows are kind of reality renovation shows like The Block and Renovation Rescue and all these things, and it seems to me that Kath & Kim could be seen as part of a piece of that, that sort of sense of focusing on the home, thinking about the dramas within the suburban everyday rather than watching something stressful about the rest of the world."

With the show now being on Netflix, it's getting a second lease on life. Arrow says the fact most people are stuck at home these days has made us relate back to these small dramas of everyday life again.

Even the fashion, which may have seemed appalling back then, has helped make the show timeless in a sense that younger generations see these trends in today's world, she says.