At the start of this year, cafe owners reported they were running out of oat milk due to its popularity at barista counters across Aotearoa.

The supply line is stretched, and it's not helped by the fact that a lot of oat milk has to be brought in from overseas.

It's a problem that Morgan Maw and her company Boring Oat Milk are trying to solve. 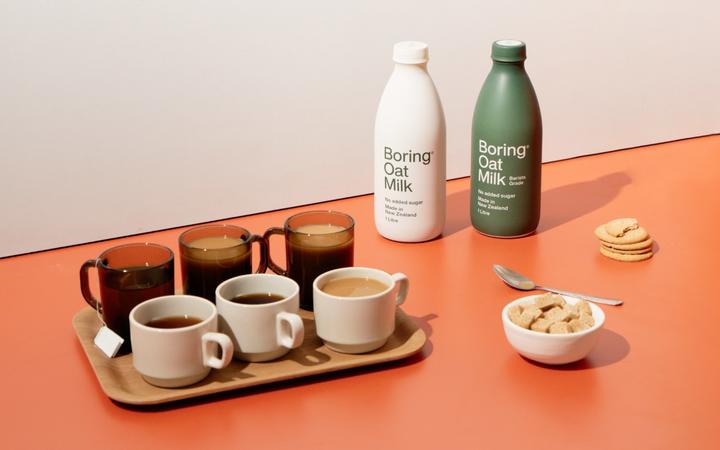 "It's delicious ... I guess you could describe it like the milk left at the bottom of your cereal.

"Another [reason why] people discredit plant milks, because you think of the '90s and you had your soy milk cappuccino and it all fizzled out and split, but oat milk pairs really well because it's creamy and it's got a slightly higher pH so it doesn't split with the coffee."

The company's name was created to stand apart on the shelves from the fierce competition by big companies with lots of marketing, she says.

"But also we thought what is milk? It's not supposed to be exciting, it's consistent, it's reliable, it's kind of like the supporting actor.

"It's a coffee that's exciting, it's your granola and stuff you put in your smoothie [that's exciting] - but [if you have] no milk, it's quite boring."

Maw says she was inspired after realising so many farmers were growing the plant to soak up nitrogen while the country was getting plant-based milk from overseas.

"There's so much scope for ... more farmers, especially dairy farmers, to be introducing oats into their crop rotations and into their pasture because it helps prevent that run off into waterways.

"We're looking at how this is sustainable, not just for the environment, but financially and culturally too."

The process of getting the milk involves milling down the oats and adding enzymes, which break down the starch and release the sugars.

This also separates the liquid from the solids, which go off into animal feed, but Maw says they're looking at ways to convert that plant protein into a product for humans too.

"It will actually end up being like a powder ... because that's a criticism with a lot of plant milks, is that they don't have enough protein because that is what you lose in that process."

The final steps involve adding oil, vitamins and nutrients to the liquid that separated and putting it through UHT (Ultra-high temperature processing).

"Boring Oat Milk is the first oat milk to be commercially made in New Zealand and that's because we had plenty of UHT lines in New Zealand ... but we don't do it for oat and it's quite a different process.

"What we had to do was find a way to convert the oats into a liquid and then put it into a tanker to send it down the road to a UHT processor, so that was the trickier bit.

"But to be honest, we use the same equipment as these guys who process apples ... into juice and concentrate ... so we're already utilising kit that's already there but just upping the ante a little bit."

The company launched two days into Tāmaki Makaurau's level 4 but has managed to roll out to cafes operating in level 2.

Maw says they're now exploring export opportunities, with China being a possible market.

"We think the New Zealand dairy story will actually help us quite a bit as well with selling into China, so I do believe that oat milk will become synonymous with New Zealand's dairy."