After being the victim of relentless trolling by people who objected to his last book, Irish writer John Boyne has turned the tables on them in his new satirical novel, The Echo Chamber.

He experienced a huge online backlash following the publication of My Brother's Name Is Jessica, which tells the story of a boy struggling to come to terms with his brother coming out as transgender. He deactivated his Twitter account as a result of what he claims were abusive comments. 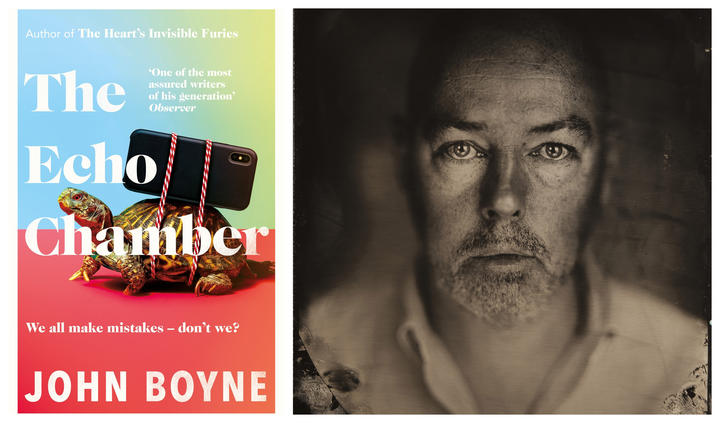 Boyne weaves this experience into The Echo Chamber. He's created the privileged Cleverley family, whose life starts to implode after George, the father who is a BBC presenter, sends an unfortunate tweet that goes viral.

Although a comic novel, there's a serious subject on the line, Boyne told Nine to Noon.

"What I'm trying to talk about here is how disconnected we have become from the real world and from each other."

Boyne says he has been pleasantly surprised by the reaction to his latest novel.

"The response to it has been really positive and actually, I expected a lot of online blow back against it.

"And to my surprise, and maybe to my disappointment, there hasn't been any serious blowback. Even though a book like My Brother's Name is Jessica was just savaged by these people online."

The head of Boyne's fictional family is George, "the 4th highest paid presenter at BBC" and a British media institution, Boyne says.

George is proudly liberal but inadvertently makes a mistake in a tweet he sends.

"He trips up because he makes one tweet, where he is congratulating a person who he knows who is transitioning from male to female. And he tweets saying good luck on your journey.

"But rather than using this person's new name, he, as they say, dead names her by using her original name, the male name, and in a moment of trying to be kind, he does this, and the world comes in on top of him."

"The reality is in moments like that, you know, we're all getting used to new language, to trying to find our way around these things.

"And there does seem to be a tendency on the part of social media that if you say one wrong thing, then you are immediately just castigated for that, we're not allowed make mistakes. So, he finds that his entire life of liberal credentials is called into question - and he's just called a bigot."

Although certainly pompous, Boyne does not believe George has done anything wrong.

"He's made one mistake on a name, you don't have to be dragged off to The Hague to answer charges on it.

"But, I find that people online will behave like that, and they do mask their own intolerance in sanctimony. They think they're activists, but they're not activists at all, they're just trolls."

Even George's daughter Elizabeth joins in the pile-on.

"She wants to be this thing, which I think is the most awful word in the language, which is an influencer.

"Anytime I hear anybody described as an influencer I just want to bang my head against the wall.

"Elizabeth is 21 years old, she doesn't have any interest in work, she has no interest in anything, she just wants to be somebody who can sit on a yacht with a glass of champagne and post a picture on Instagram and get 100,000 likes. And that's how she gets her self-esteem and her validation."

Despite it being her father, she knows getting into a row with him will boost her online profile, he says.

"Somebody famous, somebody with a blue tick on their name, then she will achieve more followers."

"Wilks is the ultimate sort of halo over the head, social media warrior, who does nothing really in real life to help anybody, but just is constantly looking for what's today's cause.

"What can I attach myself to, to make people think that I am a good person? When he's working in a soup kitchen, he's not really interested, he doesn't serve any of the soup. He just takes pictures with the homeless and posts them online."

The character is based on one who trolled Boyne repeatedly over his last novel.

"He just stalked me, horrendously, for a year. This guy who tweeted 1134 times abuse at me before I had to get the police involved.

"That kind of person who just targets you, and believes that you are the devil, they are the saint, even though they know nothing about you. They've never met you. And they just create this cartoon character. And they put that in the real world. And they say, this is who this person is. And that's who Wilks McGuire is."

Beverley Cleverley is the matriarch of Boyne's family.

"She's a novelist, a romantic novelist. But she farms her books out to ghost writers, to write her books for her while all the time thinking that she is the one who was the great creator behind it.

"And she does these kind of celebrity things going on Strictly and you know, doing the old foxtrot or the waltz or whatever, in front of an audience of millions."

All five of the people in the family: George and Beverley, and their three children, Elizabeth, Nelson and Achilles, have all been changed by their addiction to their phones, Boyne says.

"I mean, they barely have a thumb print anymore for scrolling so much."

But it wasn't always this way, he says.

"There are five moments before each chapter, where we see who these people were and who their children were, at a different time before the advent of social media, before social media overtook us, where we see how loving they actually were, and what good parents George and Beverley were towards each of these three children.

"The novel is really about them finding a way back to a place with no Wi Fi signal and talking to each other."

The Echo Chamber is published by Penguin Random House.