Brainscapes: the maps in our brain

If the brain's 86 billion neurons were all randomly connected, the brain would have to be more than 20 kilometres wide to fit all those connections.

Luckily, they're instead organised through ‘brain maps’, which cognitive neuroscientist Rebecca Schwarzlose has explained in her book Brainscapes: An Atlas of Your Life on Earth.

Schwarzlose tells Nine to Noon the atlas of maps in our brains represent everything from our sensory functions to how we move. 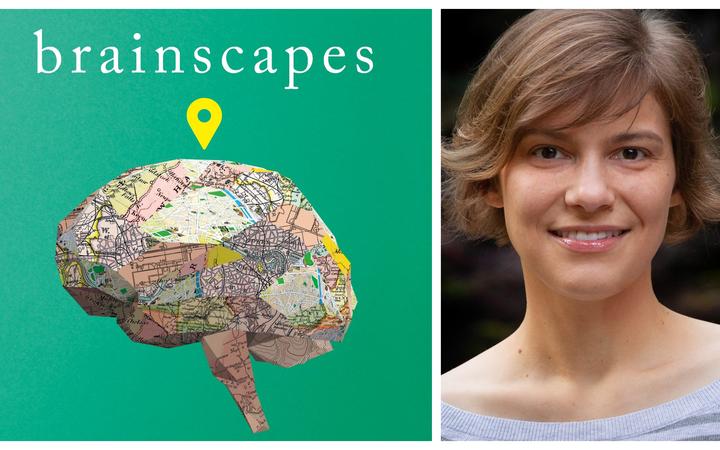 The first brain maps humans learned about were the motor maps in the 1800s, and they helped pave the way for successful neurosurgery, she says.

But these maps are not actually visible to our bare eyes, and so neuroscientists use certain techniques to be able to see them, she says.

"The reason we have to make it visible with techniques is because these maps don't represent information with darkness and light pigments like a map you would have in an atlas.

"They represent information with the firing of cells, of electrical impulses, in the neurons that are in that tissue.

"So there are many different ways a map can look depending on the technique we use to make them visible to a human eye."

These maps begin to form when we're foetuses, then when we're born our brains become more receptive to sensory information and it learns and adapts from this input.

"That's actually why the experiences in childhood and infancy can be integral to how these maps develop," Schwarzlose says.

"Because these maps crystalise... they become less able to change than a baby's maps, therefore early experiences can continue to shape what you perceive later in life."

Brain maps can be a bit of a double edge sword, she says.

For instance, a baby born blind has the ability reuse their visual brain map for other information, but if they manage to restore their vision later on, they won't be able to use that map the same way a person who could always see does.

But essentially these maps are parallel to what our body and sensory functions are perceiving.

A study that monitored where neuro activity was changing while participants watched a movie found it reflected the events on screen, she says.

"For example if you see somebody reaching for a coffee cup, you're activating areas of your visual cortex that correspond to the image you're seeing and also to the objects in the scene, including the hand, and you're also activating your touch maps as if you were picking up that cup and your motor maps.

"What's kind of amazing is that if you put someone else in the scanner, their brain in these areas of the maps are highly synchronised to what your brain would be doing at that time.

"So we have this shared neuro architecture of these maps that can be similarly activated by meaning as we watch something like a movie."

Our brains also enlarge the 'maps' of the receptors it perceives to be of importance, she says.

"Our touch maps represent our fingertips ... so we have these big honking areas that represent [touch] ... and that's why our fingertips can be so sensitive to picking up fine details and textures."

The discovery of our vast range of brain maps has opened the floodgates for technology developers to look at ways to read or place information in the brain, she says.

"For example, there have been efforts to make visual prosthetics so that somebody who is blind could have information about what they would otherwise be seeing inserted into their brain so they can try and perceive visual input.

"Or in the case of paralysis, a lot of work has been done in that field to try and read information out of these motor maps and then using them to instruct robots how to move and how to for example feed the individual who is paralysed."

While the investment in medical applications could be promising, we also need to be wary about how much corporates can learn about what we think in our brains, she says.

"Because they can use machine-learning algorithms to combine information they have with your neuro signals and to train the algorithms to start better decoding your brain activity.

"So we should be thinking a lot in the future about who is investing in these technologies and whether these are corporations or institutions that we want to place our brain data in."

Rebecca Schwarzlose is a cognitive neuroscientist at Washington University in St. Louis, Missouri.