Grow your own mushrooms

SporeShift started in 2018 with his partner Susan, and it has slowly diversified into selling mushroom spawn and seeds for keen home growers, and more recently ‘Grow Your Own’ kits. 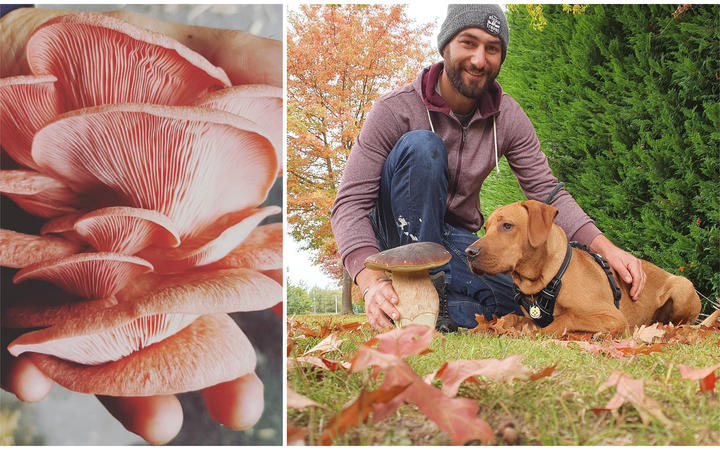 McConnell tells Nine to Noon the DIY kits are modelled around a simplified version of their commercial products.

"The goal was to make a product so that anyone who knew nothing about mushrooms [would] be able to get it and they could just do it at home without any specialised equipment."

They're also a huge asset during lockdown, a time which otherwise decimates their demand for supplying restaurants.

"A lot of people are at home with not much to do and growing mushrooms out of kits is obviously something anyone can do, even if you're in an apartment you can do these kits.

"So we've definitely had a lot of interest in people wanting information on how to incorporate mushrooms into their garden so we're ... making content to teach people how to do that.

"Mushrooms are fantastic for you soil. Basically, 90 percent of plants on Earth require a relationship with a mushroom to survive."

These are a staple for growers, McConnell says, because they're easy, quick to fruit and have an excellent flavour profile.

"Oyster mushrooms on a kit, typically you get anywhere from two up to six, your first two will be by far the largest and the harvest gets progressively smaller as the kit uses up the nutrients and the water that's held within it.

"So, when you make up your kits, they're about 60-70 percent water content and over the life of the mushroom, it'll draw the water out as it grows."

The first harvest for oyster mushrooms from the kit normally comes after 20-40 days, he says.

"Once the mushrooms start growing, they double in size every 24 hours roughly, so they grow in size extremely quickly and then you harvest that bunch.

"Then the kit will sit dormant, it will look like it's doing nothing but during that time, it's gathering up fresh nutrients to produce another flush or another harvest, and that period can be anywhere from five days to three weeks."

When it lays dormant, McConnell recommends you use a misting bottle to dampen the holes in wherever the mushrooms are growing. This process mimics rainfall and stimulates growth.

You can also add value while growing these by utilising waste materials, he says.

"Mushrooms are the base recyclers of everything, so you just use that to your advantage.

"Oyster mushrooms for example, they're not grown on manure like your button mushrooms, so they're a primary decomposer, so they're grown on straw or wood chips or cellulose-based [material]."

"So what we do is we make the blot, incubate at the farm for two months... and then we send them out ready to fruit so as soon as you get it, it'll produce the mushrooms right away.

"I try and tell people the best way to grow shiitakes is in your garden on logs, so you get a fresh log off a living tree and one of our products is furniture dells that are inoculated with the mushroom culture.

If you experience slugs coming around your log, McConnell suggest you try putting a ring of salt around the log to stop them from getting close.

Another mushroom they're trying to make a kit for is the native hericium novae-zealandiae, which McConnell says has benefits for cognitive function and memory.