Bilal Sarwary: 'Our hopes were shattered'

Afghan journalist Bilal Sarwary, who was based in Kabul reporting on Afghanistan for 20 years, is now safely in Canada with his family, having left his country with a very heavy heart.

"Our hearts are still broken by the fact that we were forced to leave our homeland," Sarwary told Nine to Noon.

Sarwary's hopes for his country were shattered, he says, as the Taliban swept toward the capital Kabul.

"They literally managed to take the city of Kabul without a single shot being fired." 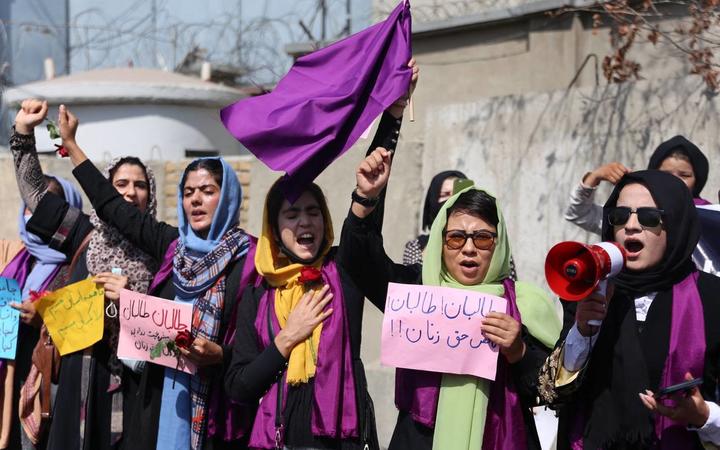 "So, our hopes were shattered, there was a climate of fear and uncertainty that prevailed. And since I have been able to leave, and I'm one of the very luckiest ones, along with others of my colleagues, we now see how the Taliban soldiers and how the Taliban are treating women demonstrators, how they have been beating up, quite brutally, some of my colleagues from Etilaatroz, which is one of the most prominent newspapers.

"So, it is simply, you know, heartbreaking to see what is happening inside Afghanistan."

Sarwary had to leave as he was being visited by the Taliban.

"I had visits by various Taliban fighters, commanders, inquiring about me, time and again, it felt like the safety of my family and my safety, were not guaranteed, but that I could also not continue working.

"Obviously, that is something that should never be taken lightly. If a Taliban fighter or commander comes and inquires about you, or if there's a knock on your door, because they're not coming to have a cup of green tea with you, they're coming, what deadly consequences any number of things can happen to you."

The mass exodus of the media from the country is a tragedy, he says.

"One of the biggest achievements of the last 20 years is gone, it's literally vanished."

The Qatari embassy helped Sarwary and his family along with 150 colleagues from media and civil society leave Kabul, he says.

"We drove stopping at different Taliban checkpoints, the first time coming across them on the streets of Kabul, and then eventually, we were flown to Doha, after about 13 hours of waiting inside the airport.

"But all of us were heartbroken because none of us were at the airport covering the story, something that we had done for 20 years, this time, we were there to leave.

"I remember walking to the C17 belonging to the Qatari Air Force. I cried, you know, tears started coming down from my eyes, because I said a silent goodbye to my city, to my circle of friends, to my memories, to the energy that I had invested in that city."

A generation of Afghans feel deeply betrayed by their own government and international governments, he says.

"So, the Americans negotiated their own deal, which was an exit deal with the Taliban. It was a matter of time before everything crumbled.

"And look at the end result, it's an epic failure, billions of dollars invested, blood and treasure, invested by countries like Australia, like New Zealand, like the rest of the world.

"And the evacuation in the 11th hour was simply heartbreaking to see that everything that I've worked for, the Americans and Europeans and Kiwis and Aussies worked for, the end result was that now it's an Afghanistan under the Taliban."

He worries for those left behind, he says.

"I have my fears that Afghan women are the one who will pay the most, more than anyone else, that their freedoms will not be there, their rights to education, rights to work.

"And that is a tragedy, because over the last 20 years Afghan women have paid a massive price to get where they are."

The decision by countries, like the US, to relocate their embassies is telling, Sarwary says.

"And that in itself tells you how dangerous the situation is, to ordinary Afghans, you know, especially to Afghan women, especially to younger Afghan men and women who don't remember the '90s."

It remains to be seen whether the Taliban are up to the job of governing the country, he says.

"I think the failure of the Taliban to provide basic services to people, whether it's ATM machines that are running out of cash, or the country's bankrupt, or the high prices of food and commodities, or the fact that Afghanistan remains literally shut to the neighborhood.

"Afghanistan, despite being an agricultural country, have always imported wheat and rice at least since the 1940s and '50s.

"And to have an Afghanistan that is not functional under the Taliban, I think is a reality today."