Catherine Raven: an unexpected friendship with a fox

Catherine Raven lives in a remote mountain valley in Montana.

She has lived more or less alone since leaving a troubled home aged 15.

She was a National Park ranger for 20 years and gained a PhD in biology from Montana State University.

One day, a wild fox turned up at the door of her remote cabin. He came again the next afternoon - and the next.

Catherine began reading to him, and the pair began taking walks together.

They became friends, and it was a vital connection in her life.

Raven has written a memoir about the unexpected bond. It's called Fox & I: An Uncommon Friendship. 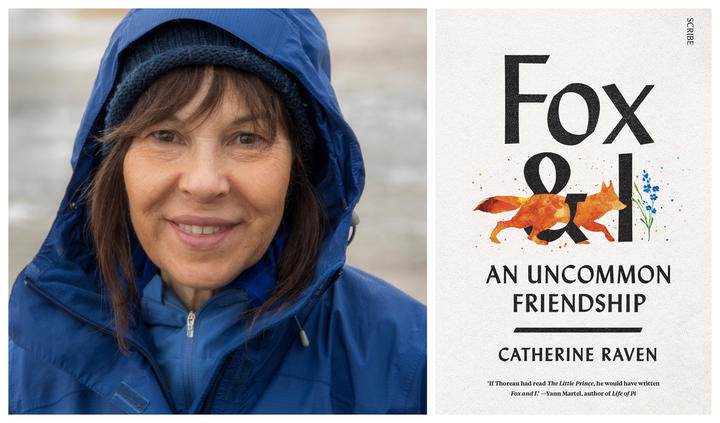 An isolated life suits her, she told Nine to Noon.

"I feel deep, deep down, like an isolated person. And I always have. So, it was normal for me to live in an isolated spot.

"But then I met the fox. And after meeting the fox, and after spending years with the fox, I had made up my mind not to leave, that this personality, my personality, fit this particular habitat.

Living remotely and surrounded by animals, she came to understand them, she says.

"Animals, as I learned, are much more intelligent and aware of their surroundings than we know. And they are opinionated, just like we are," she says.

"Animals, they have a sense not only of crowding, but they have a sense of certain human things that they don't like, metallic sounds I've noticed. And also my car, if I left my car outside the deer, the fox, they wouldn't come around. I don't know if it was some odors coming off the car.

"The way the light maybe shines on something that's metal. But if I kept the car in the garage, then they would come around right close up to my doorstep".

The fox who became her companion turned up at her property one day.

She was a large mammal the fox could form a mutually beneficial relationship with, Raven says.

"He wasn't going to hang around with a bear, bears hibernate a lot of the year, and I'm sure he found their smell perhaps noxious and they weren't very useful to him.

"He certainly wouldn't like the mountain lions and they were larger than me. Of course elks they come around in big herds and he definitely didn't like all their legs all the time. It made him really nervous when he got around a herd of long-legged ungulates. He found me not only tolerable, but he found me useful."

The fox would observe her closely, she says.

"He could see me with my hands, which he didn't have, out there working with my tools. And I think he watched and watched and he realised that I was the one animal that he wanted to buddy up with, because he thought I would be a great partner.

"And I was, I got rid of weeds for him, I watched the feral cats. And certainly he knew that I didn't like the wild cats because he could see me throwing rocks at them. And he could hear me shouting at them."

One day two dogs from a nearby farm came onto her property.

"And they went chasing the fox right in front of my property. And just my instinct when I saw this tiny little fox, and these two big dogs was to start chasing the dogs.

The fox knew he had an ally, she says.

"He put all this together. And this is how animals survive. Otherwise, if they couldn't figure out this much about their surroundings, they wouldn't survive.

"They have to know where their friends are, and where their enemies are. And he figured out that I was the one. I was the one and he dogged me around until I acquiesced and decided okay, I guess it's you and me."

He's really very small, she says, no more than 4kg.

"He was certainly the runt of his litter. And he was scrawny, even for a fox, but not sickly, because he was an amazing hunter.

"And that's one of the things that gave him time to be my friend, because other foxes, other wild animals don't have time to hang out with a person, don't have time to enjoy themselves too well, because they're busy hunting all day long. They're busy trying to feed themselves. And he was able to feed himself quite efficiently, quite rapidly. It gave him a lot of free time."

Enough time to enjoy being read to, she says.

"I could see that he had a very short attention span.

"If I wasn't doing something to keep his interest, he would start looking around for bugs to smash and putting his nose up in the air to see if there was a rodent around, something more exciting than me.

"So, I needed to keep his attention. And I just went in my house, it's a teeny, tiny little cottage, so, wasn't hard to find a book. And I don't have very many kids' books, just a couple, I grabbed it, went right outside, sat on the patio and just opened it up and started reading."

They were communicating, she says.

"He knew I was interacting with him. He understood we were communicating.

She never treated Fox as a pet, she says.

"I don't have anything against people who keep pets, I understand they're very important. And perhaps I would have a dog if I hadn't met Fox.

And the fox taught her some profound truths, she says.

"I decided after he was gone to make myself like the fox, I realised he had a better life than I did. That's the important way that I've changed.

"I choose my habitat. I choose my purpose in life. I don't let life choose me. I don't pick a career and follow it around. I have habitat and habit. That's what Fox chose first, where I want to live and the things I want to do and he wasn't isolated.

"He wasn't dumb enough to live by himself, and I seek out friendships. Those are the important ways that he has changed me."