Max Olson is the founder and chief executive of SeaChange, a company that wants to build hydrofoil car and passenger ferries that would deliver zero-emission transit.

Earlier this year the company successfully trialed a prototype, and plans are now underway to scale it up and take it across Cook Strait.

The ferry make could the 100 km journey across the Cook Strait in just under two hours, Olson says.

The first version of the ferry will have six cars on board and take 30 passengers, he says.

“Hydrofoil is actually an incredibly old technology, since the early 1900s, Alexander Graham Bell held the water speed record on a hydrofoil in 1908. 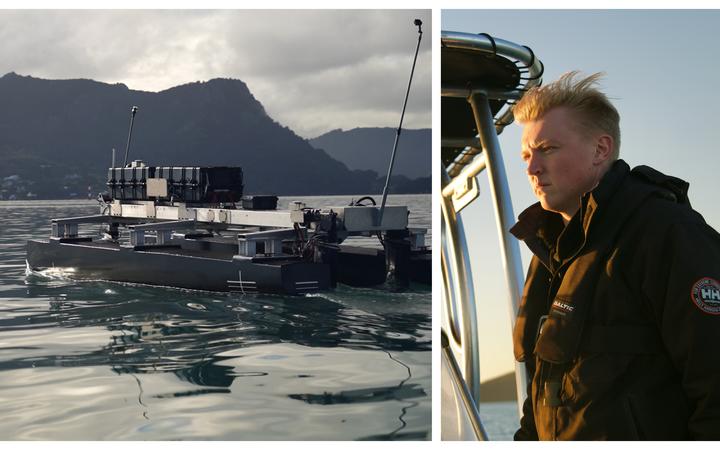 “So, we're talking something that's been around a very long time, it made a big surge in the in the ‘70s and ‘80s with hydrofoils, but very inefficient craft, due to materials and propulsion constraints.

The America's Cup of 2012 kicked off the new era of hydrofoils, he says.

“And now, ten years into the cycle, there are improvements in carbon fibre, composite materials, boats are lighter, more efficient foils, and that's made it possible to electrify these boats.”

Now instead of combustion engines, the new boat will use high power electric motors and lithium batteries.

This can power quite large craft and cover substantial distances and in comfort and at speed, Olson says.

The first full-scale boat, launching in 2023, will have a 110 km range quite comfortably, he says.

They are working on that first full-scale boat right now, he says.

“In the last few months we've brought on a bunch of incredible engineers from Team New Zealand, from Sail GP, from Oracle Racing.

“And now the race is on to start cutting molds - by the end of the year we'll be producing Boat 1 for its first route.”

The Cook Strait route is worth $US100 million a year and he sees these smaller craft as having a place in that market.

“It’s a small boat and we would charge about 50 percent more than you'd currently pay.”

The advantage is the journey would take just under two hours from check in to check off compared with 4 hours 45 minutes it is currently.

The economics stack up, Olson says.

“What's important to know is that the small scale of the boat is not a hinderance, it's an advantage.

Hydrofoils make a boat fast, efficient and also allow a very small boat to take on weather conditions that a boat of that size otherwise could not, he says.

He estimates the Cook Strait would support four such boats running commercially at a profit.

And they will handle all the Strait can throw at them, he says.

“The foils are about 5 meters beneath the boat and then the boat is riding about 4 meters above the surface of the water. So that allows us to absorb a quite frankly huge wave.

"Currently boats are designed so 10 percent of passengers in the worst conditions might get seasick, on our boats that's going to be about 1 percent.

“So, it's actually a far more comfortable ride on a hydrofoil than you'd have on a traditional ferry.”

He says the company has private venture and angel investor backing from the likes of Icehouse Ventures, K1W1 and Blackbird Ventures