Many tales have been told of the fight over Germany after the fall of the Nazis at the end of World War II.

The Allied forces of Britain, the United States, France and the Soviet Union carved the country up, and soon the capital city Berlin became a different kind of battleground for pre-war hostilities to return.

Giles Milton brings the story vividly to life in his latest book Checkmate in Berlin: The Cold War Showdown that Shaped the Modern World. 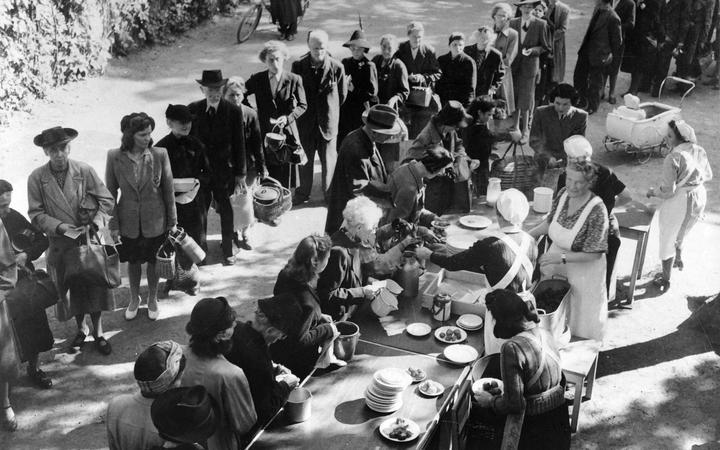 People line up during a food distribution by the German Red Cross, in September 1945 in Berlin. Photo: AFP or licensors

In Checkmate in Berlin, Milton creates what's been described as a 'sparkling account' of the time through the characters who were crucial players on all sides.

The post-war era - in which the future of the world was decided - gets barely a mention, he tells Kathryn Ryan.

In the spring of 1945, as the Second World War drew to a close, Joseph Stalin’s Red Army soldiers paced through Eastern and Central Europe.

They reached Berlin far in advance of the Western Allies who were fighting their way into Germany, Milton says.

“These Soviets got to the great prize - the capital of Germany - first, and they have two months before the Western Allies reach the city. Two months in which they can loot the place, try and take control of the place.”

The end of the war was a terrible and desperate time for Berliners, Milton says.

In those first two months, the Soviet soldiers drank, looted and raped their way around the city.

“Obviously the Soviet Union had been destroyed by Hitler’s armies rampaging across the Soviet Union. Stalin wanted his revenge and he told his army to go in and loot absolutely everything.

“The ones who really suffered were the Berliners who were living in appalling conditions with almost no food. Many, many people were dying of starvation, I think it was eight out of ten of newborn babies were dying of dysentery or disease.” 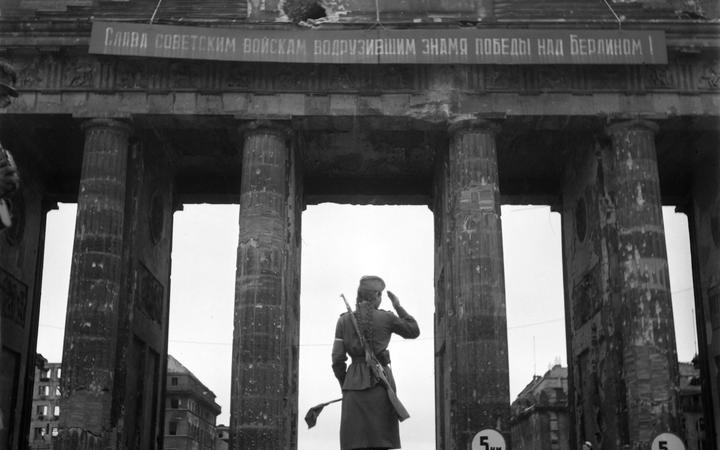 A Soviet Red army woman soldier controls traffic in front of the Brandenburg Gate, in July 1945 in Berlin. Photo: AFP or licensors

When the Western Allies arrived, there was nothing left of the city.

“The stage is set basically, for a monumental showdown between these Allies and now everything is going to turn sour. The British, the Americans, are suddenly going to find their Soviet partners are no longer partners - they are fast becoming their rivals and their enemy.”

It had been decided that Berlin, like the rest of Germany, would be split into east and west, with the Soviets controlling the east and the British, Americans and French controlling the west.

“But there is a massive problem because if you look at a map, you’ll see that Berlin sits fairly and squarely inside Soviet-occupied Germany.”

The Western Allies needed to keep on side with the Soviets - as the only way they could enter the city was by one railway, one autobahn and by air, Milton says.

Yet Stalin planned to secure the entirety of Berlin for the Soviet Union.

“The [Soviet, British, French and American] commandants, ruled their sectors in Berlin and the American commandant [was] this fabulous cowboy character called Colonel Frank ‘Howlin’ Howley. He was the one who realised that Stalin and these Russian allies could no longer be trusted... he almost single-handedly fires the starting gun for the start of the Cold War.”

The four commandants met in the Kommandantur (Command Headquarters) to talk business - and together wielded almost unlimited power, Milton says.

“Every single word that was ever spoken in that room between these four commandants was written down and typed up.”

Transcripts of the commandants' every conversation over a four-year period still exist in archives. 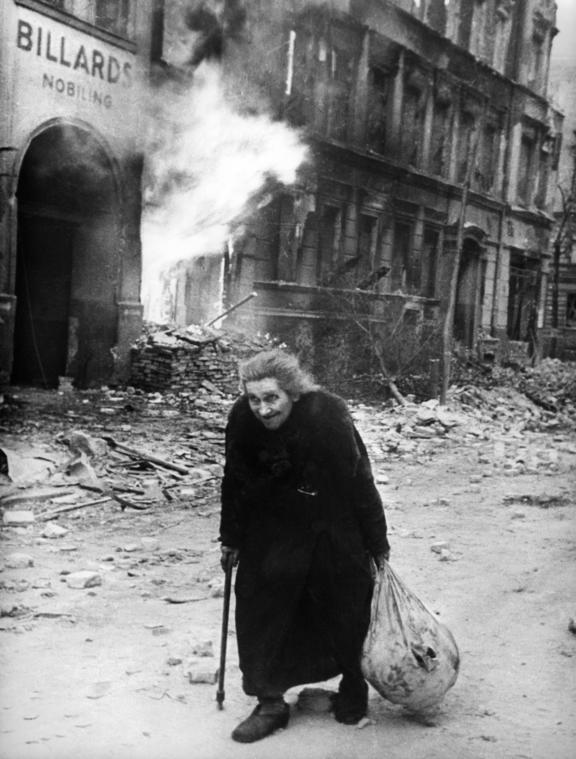 A photo taken in 1945 in Berlin shows an old woman walking on a street where buildings are burning during the Allied bombings at the end of World War II. Photo: AFP or licensors

At the time, Berlin was a city in ruin, Milton says.

“There’s no electricity, there’s no water, gas, there’s no food, no functioning government so they have to rule their own sectors individually, but they also have to run the city as a whole."

Food supplies for all sectors of Berlin typically came from the east of the city, he says.

“The east of the city was of course controlled by the Red Army, which meant that the Western Allies from day one were totally reliant on the Soviets for getting food into their districts.”

While this was fine when they all got along, the Allies realised that one day the Soviets could starve them into submission, Milton says.

“That was Stalin’s secret ploy.”

“The great fear of the British and American commandants, and to a lesser extent the French commandant, was that the Soviets would cut the only rail and road links they had into their sectors in West Berlin.

“This is exactly what happened.”

The British and American commandants were completely isolated and unable to feed the 2.5 million people in their care, Milton says.

They needed a minimum of 5,000 tonnes of rations a day, but the planes available could only carry 2.5 tonnes -“This is the chess game.”

Or, in the words of the British commandant, “One wrong step now and it’s World War 3.”