Tucci is also in Limetown with Jessica Biel about the disappearance of 300 people from a research facility. 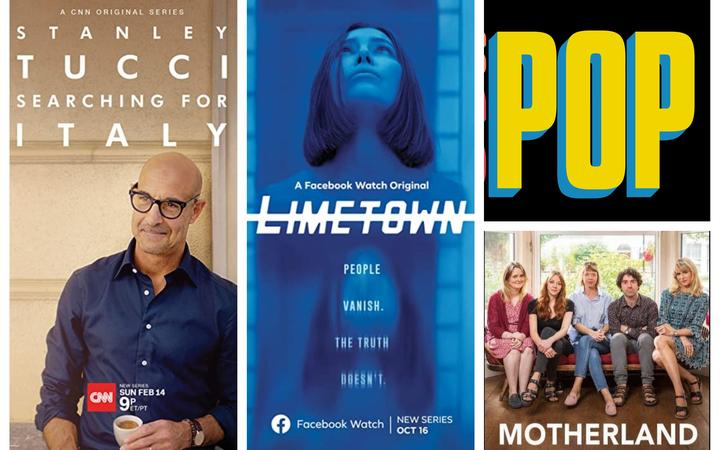 Also in the mix is documentary This is Pop (Netflix) and the new season of Motherland (Neon).

Tucci’s new travel show Searching for Italy  has an Anthony Bourdain fell to it, Croot says.

Tucci has Italian ancestry on both sides of his family his fluency in the language adds to the programme..

“This is Italian with subtitles, you have to read this show, but you just get a better flavour, if you'll pardon the word, of the region and the kinds of foods that come out of it.”

Tucci’s charm lights up the programme, he says

“He's just such a charming man and you can see that all the people who he interviews are charmed by him.”

Limetown is a dark story based on a podcast in which Tucci also appears.

“It's all about a woman, Jessica Biel, who works for American Public Radio who's investigating something that happened 15 years ago when 300 people inexplicably disappeared off the face of the earth from a small Tennessee town that was home to a neurological facility.

“Her uncle (played by Stanley Tucci) was one of the people that disappeared, and she's been trying to get a whole lot people interested in the story that fell off the news cycle after about four weeks as the world moved on.”

If you like “those kind of creepy thrillers, Croot gives this a thumbs-up.

This Is Pop on Netflix comes out of Canada and is an eight-part deep dive into various genres and aspects of pop music.

Brit Pop looked at the rivalry between Blur and Oasis and the ‘Cool Britannia’ and lad culture that pervaded the era.

“It's amazing just how much those two bands in particular hated each other. And they even went so far as deliberately putting out a single on the same day as each other, to really flex the muscles and test each other.”

The episode on Swedish pop is called Stockholm Syndrome.

But the amount of music that guys like Max Martin and other producers in Sweden put together in terms of the big hits for people like Taylor Swift, Ed Sheeran and a whole lot of others is just phenomenal.

Motherland returns for a new season on Neon.

It’s a comedy series about a group of women in London.

“There's a brilliant first episode where there is a head lice epidemic at the school. And the briefing’s done in the style of Covid briefings, and they're just brilliant.

“We've got to get the nit rate down before we can get kids back to school. It is just hilarious. There's always something funny and something you can identify within each episode.”