When Lisa Brink moved to New Zealand from Denmark, she found herself really missing the sourdough rye bread that was such a big part of her daily life back home.

“The Danish sourdough rye bread is something that you have as a Danish person included in at least one meal a day, either your breakfast, your lunch or your dinner,” she says.

Unable to live without it, she decided to make her own and its now part of the product line for her company The Baked Dane - Scandinavian inspired breads and artisan crackers. 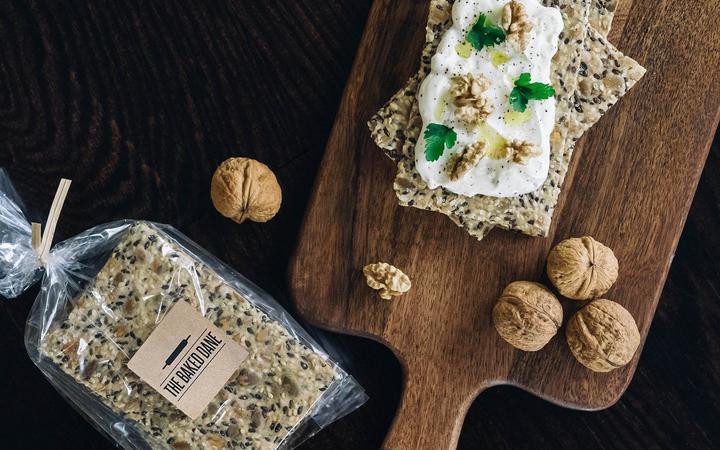 Not the type of person who can sit still, after the birth of her first child Louie, Brink tried to keep herself busy and found herself baking Danish seed crackers, or Knækbrød, whenever Louie was down for a sleep.

“At least there was something I could sort of control; I couldn’t control when he needed to feed and sleep but I could control the crackers that got baked.”

It wasn’t until her second child was born that she realised what she had been experiencing was post-natal depression.

“It was a bit of a funny time, thinking back on it the depressing things in your life you want to forget them but with Louie, something magical happened.”

It was a friend’s mum who suggested she try selling the Knækbrød at the local market - within 25 minutes she had sold out.

It was so popular that people asked for her address, and whether they would be able to pick up more.

“I doubled the recipe and went to the market next month and the same thing happened, sold out in 20 minutes.  It just sort of went from there.”

Eventually it became so popular she quit her job in retail to pursue it as a fulltime job.

“We transformed the guest house on our property into a commercial bakery and had it all certified by the council - and that’s us.”

Blink is very much about doing things the old school way – taking one ingredient and getting the best out of it.

“The more process you put into it, the less you have your hands in it and you can’t smell it, you can’t see it...for us it’s just simple ingredients and you can turn them into the most amazing thing that they can be.

“With our seeds we make them all shine by just roasting them, we experiment a lot with the temperatures, the steaming and the non-steaming and everything and we definitely think we’ve nailed it.”

They’ve even developed a desert version of the crackers, and a gluten free rice cracker.

The sourdough rye bread is made using 100 percent sourdough, so no commercial yeast is used. The rye is imported from Germany.

“Anyone who’s experimented with sourdough knows it takes a long time, it needs the time, there’s no cutting any corners or trying to cheat. You’ve got to follow the recipes.”

There’s a lot of support when you start a business in New Zealand, Brisk says.

“The best marketing you can ever have is your neighbour telling you ‘Oh my God you need to try these crackers’. It’s not, for me, seeing it in a catalog somewhere. We’ve really been thriving on getting that organic support from the community and from our customers that go into cafes in Invercargill and say hey you need to be stocking these.”