Groundbreaking research has dated kūmara in New Zealand back to the 15th century, lining scientific evidence up with mātauraka Māori.

The excavation of an ancient kūmara pit just north of Dunedin at Pūrākaunui is also the most southerly ever to be discovered in Polynesia.

The find is valuable to local Māori, aligning with stories, knowledge and place names, as well as an insight into how this taonga was stored over half a millenium ago. 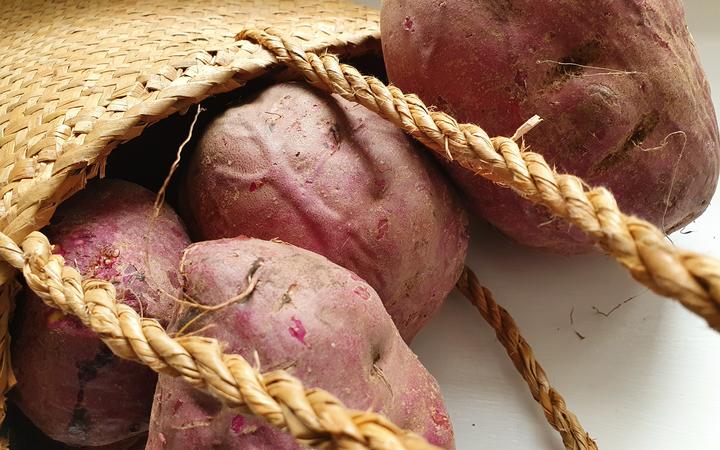 Associate Professor Ian Barber from the University of Otago archaeology programme says they’ve been able to radiocarbon date the pits to 1430-1460 CE.

“We suggested...that they may have been managed by placing hot rocks into the pits during colder months to maintain the temperature.

“But even more exciting is the possibility of microclimate production, kūmara production.

“They could have been transported down the coast, but we have the opportunity now to test the possibility that there may have been microclimate production.”

He says around that time the moa disappeared, suggesting the pit was introduced further south in response to the loss of this food source.

There’s a debate in archeology around when kūmara arrived in Aotearoa, he says, this find indicates it was here pre-Spanish exploration.

Some botanists and scientists argue it's natural introduction, but Bar says we know so little about the original sweet potato in the Pacific.

The genetics of the original sweet potato that arrived in Polynesia are very difficult to recover from evidence today, he says.

“Whereas the argument for cultural introduction – along the coast of South America there are names for sweet potato, traditional names among a number of indigenous peoples, that are clearly related to the Polynesian name kūmara or umala.”

Chair of the Pūrākaunui Block Nicola Taylor says recorded history from European settlers in 1848 found 45 people living in the area.

“For our whānau, hapū groupings we know we’ve got quite long and ancient connections and our Māori land block of 206 hectares...is a tiny fragment of the Māori land history but it’s all that’s left.”

The rūnanga had a hunch the 15 century time frame was accurate, Taylor says.

They’re now proud to see the research confirms the oral histories and narratives, she says.

“What’s particularly exciting about this that emerging partnership between the traditional views and stories about the past and the academically driven research.”

The new research is published in science journal Plos One.