Patricia Grace - From The Centre

As a child, the place Patricia Grace most wanted to be was Hongoeka Bay, with her whānau, on their ancestral land.

It’s where she begins her memoir From The Centre: A Writer’s Life.

“I think I’ve always got inspiration from the people around me but I think it was with those people in Hongoeka Bay, the whānau there, that I had a lot of freedom and it freed up the mind and the imagination as well.” 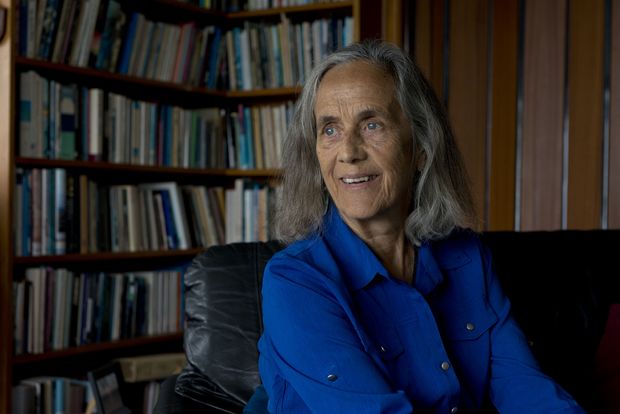 From the Centre takes us through Grace's childhood, her education, marriage and up to the present day.

As a child, Grace spent a lot of time with both her Pākehā and Māori family. “It was a life of cousins really, my brother and cousins who are like my brothers and sisters.

“There were two different worlds really. But they kind of weren't to me, I knew which leg I was standing on all the time.”

Growing up, her parents never spoke of the racism they experienced.

“Except in a joking kind of way. You know, when my father told us about when he was carving out a section out of a rocky hillside in Melrose to make a building platform and boys of the district would come up behind them and do a mock sort of haka.

“And he would tell us about this and laugh like anything, you know, that this had happened. Or the part that made him laugh was that he turned around as though he was going to chase them one day and one boy fell over and the other wet himself. My father thought this was an enormous joke.”

Even as a young child, she didn’t find it funny, she says. “So, I suppose I was aware.”

Grace recalls her own experiences of racism as a child.

“Along with that there was often the assumption that I wasn’t clean, I wasn't clever, you know. These were the things that hurt me.”

These things undermined her confidence, she says, and as a teenager she experienced depression.

It was at teacher's college Grace discovered contemporary New Zealand writers of the times like Robin Hyde. It’s also where she met her future husband. On her first posting she was introduced to the Pen Women Society and joined as a country member.

“I had always loved writing, but I didn't kind of know that a writer was something one could aspire to be and that was partly because I'd never read writing by New Zealand writers.”

It was also when she began to challenge racist stereotypes in children's literature. Eventually Grace wrote her own children’s book The Kuia and the Spider - it took her half an hour. In 1982, it won the New Zealand Picture Book of the Year.

“It was groundbreaking in many ways, I suppose, because I insisted that we have a Māori language version of it. The publishers didn't really want to do it. They said, who can read it, and who will read it. And they were quite right at the time, but they did it, so good on them.”

She says even now, there’s still so little available to young readers in te reo.

"After I published Waiariki I knew that was something I was going to keep on doing.

“It gave me the confidence to know that it was something that I could do, and that probably I had always wanted to do, because even through my schooling, writing was the thing that I did best.”

Grace has published seven novels and seven short story collections, as well as a number of books for children and works of nonfiction, many of them award winners.

Her novel Pōtiki won the New Zealand Book Award in 1987.

Pōtiki tells the story of a small coastal community threatened by developers. After it was published she was shocked to be suddenly seen “as some kind of radical stirrer”.

“I was only writing about normal things,” she says.

While tying to build her home, Grace became aware of attempts by Crown agencies to take and develop the land near Hongoeka. In the 2000s, the land was to be taken to build a motorway.

“It’s always par for the course that’s with you all of the time. You have it with you, but you have it for the rest of your life.”