A 25-year-old's mission to revolutionise the wool industry

A young Kiwi entrepreneur has invented a material he hopes will save the strong wool industry from five decades of decline.

Logan Williams is a scientist, a serial inventor and the director of technology and innovation at the New Zealand Merino Company.

Together they are marketing a material, Keravos, that combines coarse wool with polylactic acid (PLA) derived from corn starch. 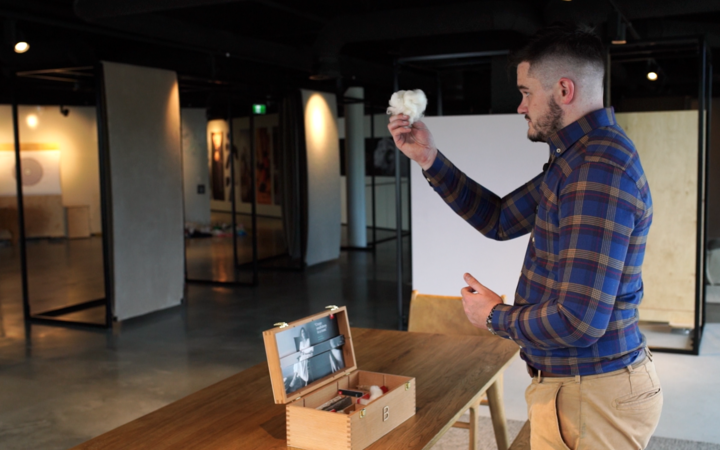 That product, sold as pellets, can be used as a substitute for plastic and gives farmers an income stream for a product that has been seen as practically valueless for years, he says.

“Ever since the introduction of nylon from DuPont in 1966, the whole strong wool industry has collapsed to the point where it actually costs more to shear the sheep than you get for the wool,” Williams told Kathryn Ryan.

New Zealand Merino are backing the venture and co-own the invention with Williams, he says.

“We produce about 200,000 tonnes of strong wool year, that's a quite a large amount of volume. There's only one industry we can really play in to shift that volume and really achieve higher value for farmers - and that's plastics.”

Williams knew to find a market for coarse wool he would have to come up with a plastic alternative. His earliest experiments were done with some cheap kit from The Warehouse, he says.

“I started out by going to The Warehouse and getting a toasting machine, 1kg of PLA corn starch and chopped up some wool with scissors and simply made a sheet out of it. That's literally how I started.”

He used a $25 toasty machine and an electric frying pan to melt down the PLA.

This inventiveness does not come from nowhere, Williams has previous international success as an inventor.

His inventions include a method to turn didymo algae into biodegradable products, a device that destroys methane produced by cows, a medical nebulizer and polarised contact lenses to treat photosensitive epilepsy.

In recognition of his work, he has been listed on the Forbes 30 under 30 for Asia-Pacific.

The science behind Keravos is simple, he says.

A fundamental premise of all materials engineering, he says, is that if you add a fibre to a polymer it improves its strength.

“Wool is composed of what's called keratin protein. It's actually one of the strongest natural materials on the planet.

“So, what happens is it gets infused with the polymer and it makes it incredibly strong. And wool is also quite lightweight. So, the more wool we can put into the polymer that the lighter the products will be.”

Now they are in a “rapid exploratory R&D phase”, he says, introducing three products to market: a catamaran, a kayak and a cooler bin.

The catamaran, which will sail across the Cook Strait to demonstrate its ruggedness, is being developed with a company called Fat Cat.

The potential applications of the material are huge, he says.

“We've explored all sorts of products, from cups to furniture, to cladding - really this can be applied in the majority of industries.”

The product will use waste wool such dags and belly sides, he says.

“So really were taking 30 cent [per kg] wool and ideally turning it to $5 wool.”

Williams says the 10-year goal is to walk down the street or go overseas and see “our material everywhere".

“What we need to do is cast our net as wide as possible and test our material in as many products with high value consumers as possible. And we do that by simply partnering with brands that already specialise in those industries.”

The key to the product is its versatility, he says.

“The common way for people to do a materials engineering company is create this really complex, expensive material that can't really be applied.

“And if someone was to use it, they would have to change all their machinery, we're trying to do the complete opposite.

“We're trying to make pellets that can be ubiquitously added to any factory and lower the barrier of entry. So, any customer can simply just take our pellets and make their products.”

The company is producing 4 tonnes of pellets a day at its Hamilton factory and there is no shortage of raw material, Williams says.

“So, 220,000 tonnes of wool is produced each year, but we also have to remember that the wool price is so low, that in some cases that you know there are there are 1000s of tonnes just sitting on wool stores dormant waiting for the wool price to go up. We certainly won't run out of resource to make a material out of.”

The product is also biodegradable, he says.

“PLA is industrially biodegradable, which means it has to be in the right conditions to break down. However, when you add wool with it accelerates the biodegradation.

"Wool in an anaerobic environment just planted in the ground will naturally biodegrade, so to actually speed up the process of PLA, is fantastic.”

Williams believes this kind of venture is just what New Zealand needs to finally break into value add commodities.

“New Zealand as a whole country actually leaves trillions of dollars on the table. We make world class commodities that make up the majority of our industries.

“From forestry to milk to wool. We need to be taking these world class commodities and creating really good, high value consumer brands and selling them internationally.”

Logan Williams be speaking next week at the Boma New Zealand Agri Summit.