Artist and inventor Daan Roosegaarde and his solutions to gnarly problems

“We should be curious, imagine and then create.” That’s the philosophy of world-leading designer artist and inventor Daan Roosegaarde whose work tackles some of the gnarly issues facing the globe, particularly climate change.

“We live in a world where there’s not a lack of money or technology but perhaps a lack of imagination – how we want that better future to look like.”

Looking out his window in Beijing, Roosegaarde saw a city covered in pollution – he literally couldn’t see the other side of the street. Feeling inspired, he thought back to when he was a boy, playing with plastic balloons and polishing them with his hand creating static.

He decided to take the same principle and build the world’s largest smog vacuum cleaner – it sucks up polluted air, cleans it and releases clean air. What you end up with, he says, is clean-air parks where people can enjoy clean air for free. 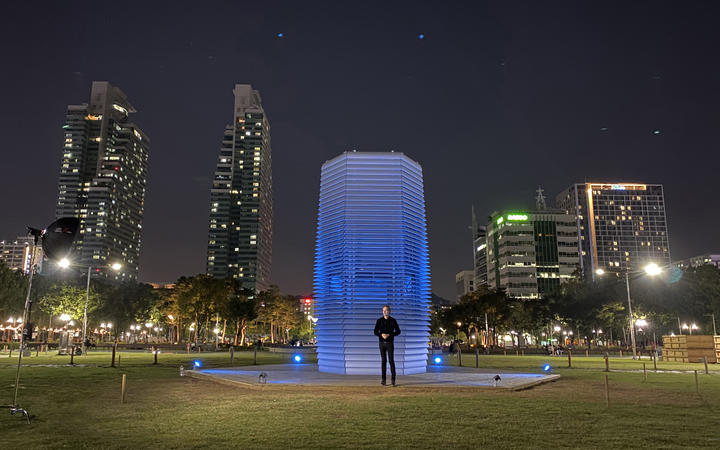 It’s a good example of improving life in a practical way by being creative, Roosegaarde says.

“We first have to imagine a better future and only then we can create it, prototype, engineer it and share it,” he says.

“I think values like clean air, clean water, clean energy, those are our true luxuries so to speak...our true values and I think the beauty of design and art is that it can show the poetry, show the beauty of that better future.”

There’s no way to fix everything, he says, but there is power in collaborating with other to create a better world.

It takes time for people to get used to new ideas, and Roosegaarde is used to people asking him if something is allowed, or even possible.

When he and his team were creating and designing the sustainable dance floor in 2008 – a floor that creates energy when you dance on it – people first asked if it was even possible. When it was in action the question was flipped and suddenly people wanted to know why it hadn’t been done before.

“It’s not just about technology and money, it’s also about questioning what is reality and what can we do to activate.”

In 2018 a group of scientists discovered an ultraviolet light which is not harmful to people or animals as traditional UV is. But the light can still kill viruses, including Covid-19.

Roosegaarde was reading the scientific article and became fascinated by it. He was working with a team from Columbia University when the pandemic hit.

They ended up creating Urban Sun – a sphere floating in the air which projects UV light beneath it, sanitizing everything at the speed of light.

“This is a place where you can meet more safety so it’s a step forward in a problematic time,” he says.

“The power of light is really amazing.”

Another of Roosegaarde’s projects called Windvogel harvests energy from the sky using kites tethered by luminous strings to dynamos on the ground. One of his most recent projects is searching for a solution to the problem of space junk.

“There are more or less 8.1 million kilos of space junk floating around our Earth...the problem is although they are really tiny small particles, it moves at 27,000 kilometres per hour so when it hits an existing satellite, bam!”

It’s a threat to our online communication, he says.

Several space agencies started to develop and create ways to capture the junk but Roosegaarde realised that when it enters the Earth’s atmosphere again it burns up, creating light.

That’s what they’re now doing – using the budget for traditional fireworks to clean up space and find a new way to have sustainable fireworks.

Roosegaarde is a Young Global Leader at the World Economic Forum, a visiting professor at several universities, was selected by Forbes and Good 100 as a creative change maker and named Artist of the Year 2016 in The Netherlands.

He says designers and engineers can solve big problems, and shouldn't wait for governments as they're too slow and prone to change. He's taking part in the Boma NZ Agri Summit next month.