Niva and Yotam Kay have produced a "go-to guide to gardening" - The Abundant Garden.

Organic vegetable gardening is their thing, honed to a fine art after years getting their hands dirty in the Coromandel soil after arriving here six years ago from Israel.

They have a quarter acre plot, part of Pakaraka Permaculture a 215-acre farm they co-own at Kauaeranga Valley, where they've been growing upwards of $85,000 worth of organic produce a year. 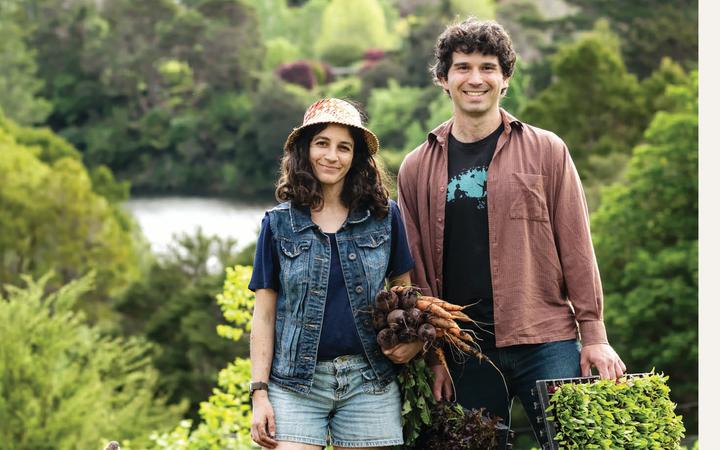 Yotam tells Kathryn Ryan that the site is everything they ever wanted, but it’s not actually a very good place for gardening.

“It’s considered marginal. We don’t have a single bed that’s facing north, all of our beds are on a slope. It’s compacted, rocky, but it’s good loamy clay soil that, once we’ve aerated it and added organic matter, is fantastic soil to grow in.

“It wasn’t an easy start and, because the site is considered marginal, we’re pretty proud with what we’ve managed to achieve from it. We think that anyone, with almost any garden that has enough sunshine, can produce food.”

The farm they co-own with Harry Parke, partner of the late Green Party co-leader Jeanette Fitzsimons, they share olives, chestnuts and animals and manage those together. Their market garden is theirs alone and their personal livelihood.

Niva says everything starts with soil and it’s all about keeping soil layers in tact while taking care of the soil biology.

“It’s about building that organic matter within the soil over time. It’s not that you have to start with the best soil from the get go, you can build it over time by not tilling it, by growing more plants in it which release organic matter and feed the biological community.”

She says adding a lot of compost and organic matter to soil is key to creating a healthy, loamy soil.

“We also mend the soil according to the mineral deficiencies it has,” Yotam adds, “we advocate using natural fertilisers that are often waste from other industries and incorporating them.”

Compaction with clay soil can be an issue for many would be gardeners around the country and Yotam advises simply putting in plants so that their roots can break it up.

“In some situations, you would need to have physical intervention, but in most situations put plants in the soil and we’re also advocating forking the ground. Instead of inverting the soil layers by digging, by using the fork and going in a way that doesn’t disturb the soil layers that can go a really long way.”

For them, it’s not a once and done adding a top layer to soil, they add a layer every single season.

Niva says the less disturbance the better when adding topsoil. By digging and turning, the new layer can get pulverised and wash off in the rain.

“We don’t have a spade that we use in the garden,” Yotam says, “we only use a fork.”

When starting from scratch, the pair use weed mats rather than chemical intervention or digging out plants. The process takes around two months before they can pull the mats out and start forking the soil and begin turning it into a bed.

Listener questions for Niva and Yotam:

How many hours a week are worked in the garden?

Yotam: “It’s changed over the years. We’ve managed to produce more and more from our garden. That $85,000 figure was in our third year; this year we’ve sold almost more than $120,000 from the same area and that means we have a lot more food that we need to harvest and process. We’re probably working about 80 hours on average in the garden.”

I have a great compost system but it’s currently invaded by slaters, are these a problem?

Yotam: “I wouldn’t say so. I’d need a little more information on how that compost was made and what stage it is at. There’s a lot of different creatures that can come and help breakdown organic matter and make it more bio-valuable to plants.”

Is there a place to look for jobs in the organic gardening industry?

Yotam: “Yes, there are jobs coming out and what we are focussing on in our education is both home gardeners and then small commercial growers – how you can grow food in your own backyard and either make a living from it or supplement livelihood.”

How do you deal with fungus and plants?

Yotam: “We do a few different things. One of the main things we do is we create an environment that is full of fungi. We try and breed our fungi, we inoculate our soil and our plants with a diversity of beneficial fungi. Good compost will have good networks of fungi in it. Once we’ve created an environment that’s really alive, that tends to not be an empty vacuum when a parasitic fungus comes – there’s fungi that has already occupied that niche.”

How significant is companion planting in your pest control management or optimisation?

Niva: “We don’t really use companion planting for pest control, it’s not a significant method for us. We do use inter-planting for producing more crops in the same space, so a slow growing crop with a fast-growing crop. One of the things we aim for is a living mulch where your crop cover basically covers your soil because, if it’s exposed, it’s an invitation for weeds to grow there.”