A farmer's journey from traditional to regenerative farming

Jono Frew is the co-founder of a network Quorum Sense which brings farmers together to share knowledge about regenerative farming systems.

Frew is an award-winning farm manager and has a background in dairy, arable and sheep and beef. 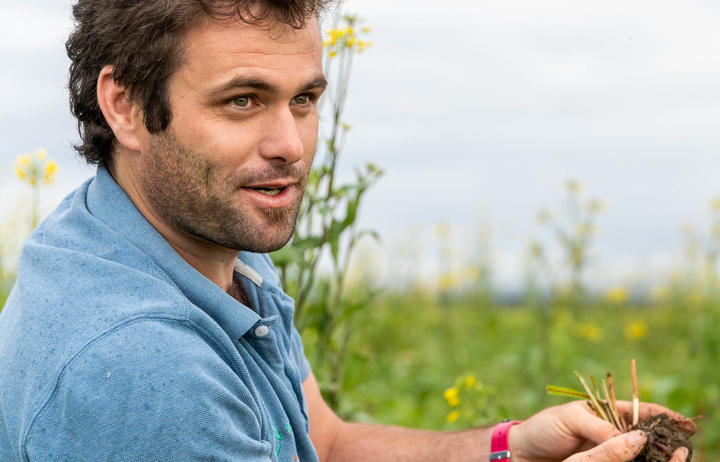 He comes from a family of agrichemical applicators and contractors, but is now passionate about transforming the health and resilience of soil and the complex ecosytems that depend on it.

Before he became involved in organic farming Frew was your typical “hard-working Kiwi bloke running himself ragged,” he told Kathryn Ryan.

He was working 100 hours a week and things came to a head when his wife went into labour while he was out spraying a field.

He finished the job jumped into a car and headed for hospital.

They drove to the nearest maternity ward, in Lincoln, and a baby boy was soon born.

“Here I am with my new born son in my chest while I’m covered in chemicals”, he says.

Shortly after this he is offered a farm manager’s job on one of New Zealand’s first organic farms.

“I was approached by Tim Chamberlain who owns Harts Creek Farm one of the original mixed cropping sheep and beef farms in the country. Out of the blue he asked me if I’d manage his farm.”

For a famer steeped in conventional methods, this seemed odd, he says.

But he was starting to see the environmental damage conventional farming was causing.

“All the while I was observing these things, but I was unable to see that I was contributing to that and in that moment that I was asked to manage this organic farm, once I got over the shock of how crazy is this man asking me the local chemical expert, something struck me as this is something I need to look into.”

That was the start of a steep learning curve, he says.

“A lot of things that were contradictory to what I’d been taught, that I’d known to be so about agriculture. Things like monocultures being the only way.

“Nutrient removal rates and nutrient application and all of that went out of the window when I started playing around with plant diversity.”

He became fascinated with “the world beneath our feet,” he says.

“I never realised that the soil was a living organism. For every teaspoon of healthy soil there are more microbes in that than there have ever been humans on this planet.”

This new approach was essentially a shift from killing life to embracing life, Frew says.

“It became a shift from controlling mono cultures and applying nutrients and essentially treating any life as a threat.”

“In 2018, I left the farm and became a full-time farm consultant and coach with Natural Performance.”

“Get out of the way and allow the plants to engage with the biology.”

The first step being to stop doing harmful things like applying fertilisers and over cultivation, allowing soil structure to develop.

A variety of plants also makes for diverse and healthy soils, he says.

He advises a good first move for dairy farms is to sow a diverse winter feed crop.

“With a winter feed crop we can go from spending $2000 to $3000 a year on fodder beet, which destroys soil structure and promotes things like acidosis in our cows, to growing a poly culture diverse species winter feed crop that requires no fertiliser at a cost of around $440 a year established, and it regrows and are animals eat less of it.”

His life has completely changed now he is sharing his ideas and experiences with the wider farming community, it is a more purposeful, satisfying life now, he says.

“When I started to discover the ways in which I could contribute to my wider community by sharing my experiences it was like this whole weight lifted off.

“I began to really sleep well at night, for years I struggled with sleep, I never knew what it was to be present I was so in my head about being busy all the time trying to so all the things that I felt were expected of me as a farmer.”

Frew will be speaking next month at the Boma NZ Agri Summit.