Fiona Murphy: The Shape of Sound

Fiona Murphy is an award winning poet and essayist whose new memoir The Shape of Sound explores her experience of being deaf.

She was in her first year of school when a hearing test confirmed she was profoundly deaf in her left ear.

She has limited hearing in her other ear and has recently learned she will eventually lose her hearing completely. 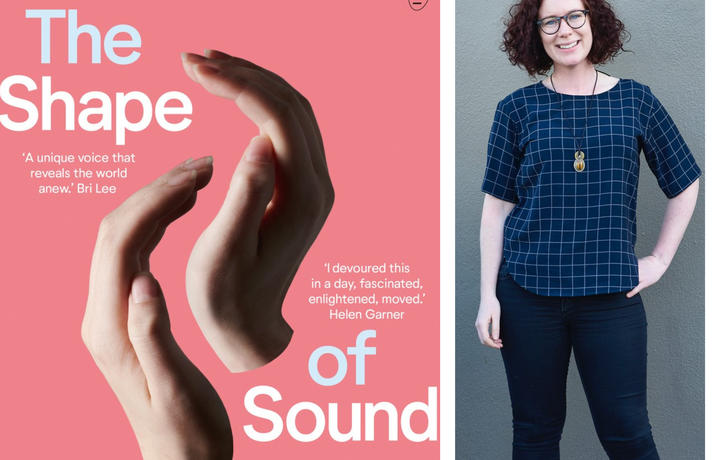 Murphy says for two decades she did her best to keep her deafness hidden, and it was only in her late 20s that she began identifying as deaf and began learning to sign.

Murphy tells Kathryn Ryan learning Auslan helped her discover her own place within the deaf community and indeed her own identity.

Growing up she hid her deafness as she felt she had no other option, she says.

“It didn’t really feel like I had any other choice. Growing up I didn’t really see any other deaf people on TV or in the media, and if I did on a rare occasion they were usually the butt of a joke.

“It was typically an older character and their inability to hear and communicate was kind of great comedy, so I didn’t want to be associated with hearing loss at all."

For years, Murphy says, she didn’t really understand what hearing was.

“I thought I understood what hearing was, well you use your ears to hear it’s as simple as that. There’s so many things that I had to be told along the way, which were incredibly shocking pieces of information that just didn’t occur to me about how differently I experienced the world of sound and noise.

“For instance, it wasn’t until I was a teenager that I realised that people with two functioning ears are able to locate where sounds are, so you don’t have to use your eyes to figure out where a voice is coming from you automatically know where people are.”

This she says was “truly astounding” to her and made her realise how hard she had to work when engaged in conversation.

“Like most people I assumed that being deaf meant things were softer for me, I didn’t realise that sound had a completely different shape and texture and almost a density to it. So, when I was trying hearing aids in my mid-20s the audiologist said quite matter-of-factly to me, this is why the world sounds flat to you.

“I couldn’t understand what she meant by ‘flat’ because to me it felt like sound was so physical and vibrant [it was] in my skin and in my mouth and it was something I could taste and feel.”

Distinguishing between different sounds made conversations something she had to “sweat through”, she says.

“Another thing with hearing loss is that sounds just don’t get softer, but the words themselves start to almost disintegrate and fall apart because there are voiced and unvoiced sounds in each word.

“As you lose your hearing, you’re losing different pitches and tones, so letters fall out of words, so it becomes more muddled, and muddy is a common description of people with hearing loss, words just become very muddy and I’m literally squinting my way through conversations to try and decipher what other people are saying particularly in noisy environments.”

She was six when it was first discovered her difficulties at school stemmed from deafness. She was a quiet child but “very confused” in class.

“I would just often sit there and write nothing in my book because I just couldn’t keep up and understand how sounds could be connected to letters. I didn’t understand the alphabet let alone how to write my own name.”

She was sent for learning difficulty tests which uncovered the real reason for her difficulties - she was deaf in one ear and partially so in the other.

With the help of her mother who taught her “stickability” she persevered and caught up with schooling and when she learned to read her world changed.

“I discovered the library at school and realised this was a quiet, safe place I could sneak off to at lunch times.”

High school led to university where she went to study physiotherapy.

Training in hospitals was particularly challenging, she says.

“Hospitals are extremely noisy places it’s quite interesting that the noisiness of hospitals is universally the most common complaint that patients have.”

Her own experiences of fatigue, irritability and headaches at the end of the day, she assumed, were just part of her personality rather than the result of her working so hard to communicate and listen.

“I started to realise that deafness was starting to influence not only who I was but the decisions that I made and how I engaged with other people.”

Her experiences with hearing aids were intense, she says.

“To be honest, I hated it. It was distressing and awful and even though, theoretically, it should have been easier it was something completely different to what I had ever known, and it was too much information.”

Rehabilitation is seldom offered with hearing aid trials, she says.

“It is not like slipping on a pair of glasses, it is intense for the brain to process and comprehend what the information is. It is an incredibly exhausting and emotionally overwhelming experience for a lot of people.”

A series of events led to her embracing her deafness.

She started to see sign language on Australian screens and realised hearing loss was being treated as something serious that should be respected.

“I also read a tremendous book by Oliver Sachs called Seeing Voices that book even though it was published in the 80s it was truly revelatory to me.”

She learned that deafness can be viewed as a culture not a deficit or a disability.”

“It’s a communication barrier that can be, not overcome, but navigated through language and community.”

“Once I started signing, my sense of self just expanded and expanded and I realised then just how much I’d been holding myself back with having a secret.”

“It’s a whole and complete language, it’s not pantomime or gestures. Sign languages have a vast array of signs that have nothing to do with spoken language whatsoever and have their own syntax and grammar and a sense of time and special awareness that it was thrilling, completely thrilling and it changed my sense of self completely.”