How Twitter took QAnon from America to the world

Donald Trump may have gone, but could his legacy live on in the form of conspiracy theories that have spilled beyond America's border?

An analysis of tweets rooted in the US-originated QAnon theory in the lead up to the US election last year looked at how it spread to Europe, where it merged with EU nationalism, antisemitism and coronavirus denial. 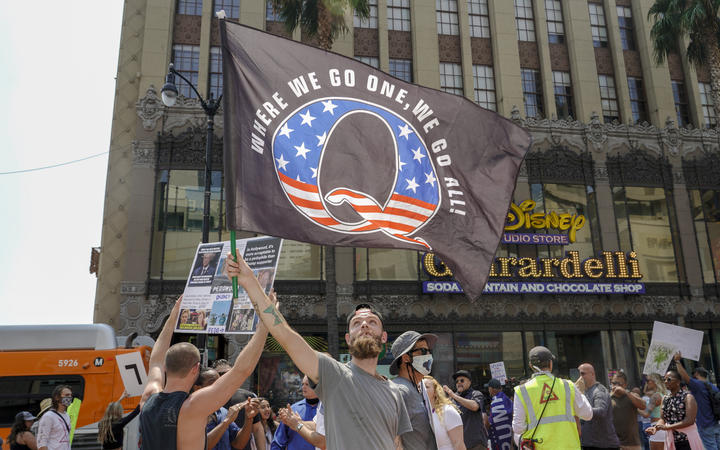 File photo of QAnon protesters at an anti-child trafficking rally in Hollywood in August 2020. Photo: AFP

Dr Verica Rupar, associate professor in communications at AUT, is one of two authors into a report on QAnon’s spread on Twitter and tells Nine to Noon that no one knows who ‘Q’ is but he first showed up on message board 4chan in October 2017.

“He was saying that he was a government insider and he knew for sure what was about to happen; the arrest of Hillary Clinton, that her passport had been taken, that Trump is organising a purge of all corrupted politicians and all those who are participating in child trafficking.”

Since the storming of the US Capitol building on 6 January by Trump supporters, Twitter and other social media giants conducted a purge of extremist accounts. And, now that Q’s predictions have failed to materialise with Joe Biden becoming president, the conspiracy theory looks increasingly bunked. However, Rupar says it’s too early to say if it will fizzle out.

“There is a lot of ordinary people who are posting messages saying they feel they have been fooled… so there is some dropping out of the QAnon net. But others are getting more aggressive, organising themselves and creating new conspiracies.”

One of the new theories is that the inauguration was a staged event, that Trump is still in power and organised a stand-in for Joe Biden. Another theory is that Biden himself is Q.