From making a name as an in your face, stroppy, feminist, stand-up comedian to becoming a regular on the small screen, Jo Brand is a long-established master of subverting expectations.

Her TV credits include QI, 8 out of 10 Cats, Have I Got News For You, and the black comedy, Damned.

She was also the star and writer of Getting On, the BAFTA award-winning series, set on a hospital geriatric ward. 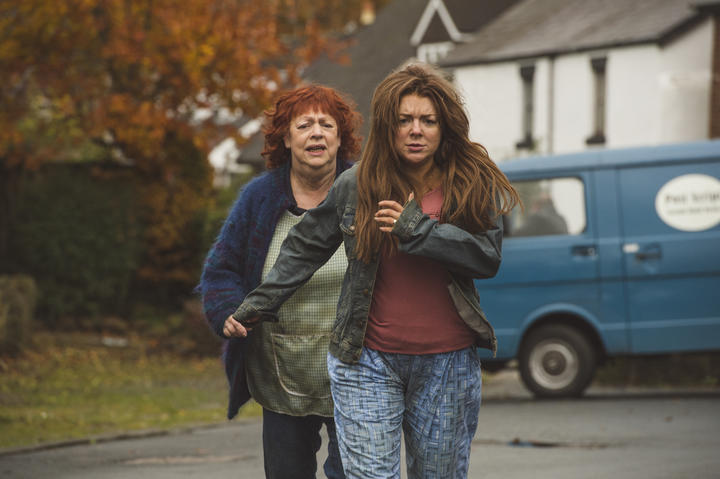 Sandra (Jo Brand) and Gina (Sheridan Smith) in The More You Ignore Me Photo: Gareth Gatrell

Similarly inspired by her time as a nurse is Brand's novel and feature film The More You Ignore Me, starring Sheridan Smith as a Gina, a schizophrenic mum who is hospitalised after becoming obsessed with a local weatherman.

Depictions of people with mental health problems in film and literature often miss the mark, she told Kathryn Ryan

“One thing I have got is experience of working with people with different mental health problems, I’ve seen a lot of drama and read a lot of novels in the past that don’t quite get it right.”

The film follows Gina as she struggles with her illness, and the strain that puts on her family.

“It’s one of those stories of families all over the world who have one member who is suffering in one way or another.

“My dad suffered with very severe depression through most of my childhood and teenage years and it really skews the way the family fits together.”

Humour was an essential crutch for Brand when she worked in the NHS in the 1980s, she says.

“Certainly, in services where you see an awful lot of pain like nursing, people with mental health problems, people with physical problems and in the ambulance service where day after day paramedics will just see the most appallingly sad situations.

“You will find that that group of people tend to be those with the darkest sense of humour and it gets them through the day.

“The two prongs that got me through the 1980s, and it’s not acceptable anymore, was sitting with someone and having a cigarette and having a laugh with them.”

That ability to make others laugh triggered her change of career, she says.

“I’d done nursing for ten years and it was extremely stressful. I loved it, but I didn’t feel I could do it for my whole life and I just wanted to try something totally different.”

Her move into comedy has led to a multi-faceted career, one more by accident than design, she says.

“I’m really open to trying lots of different things. I’m absolutely fascinated by politics for example so when I got offered the chance to attend political events I jumped at it because one thing about doing this job that is so brilliant is that it opens up most areas of the world that you might want to get involved in and it’s just your choice as to which road you go down.”

She is still performing and says her reputation for the ferocious put down was a learned skill.

“It is essential, and anyone that thinks it’s innate will find nine times out of ten that’s not the case.

“What you need to do if you are a budding comedian, is you need to look at yourself in the mirror and think ‘what is the first thing about me that is going to strike an audience that they might heckle me about’.

“And once you’ve worked that out, obviously it wasn’t difficult with me because I was fat, that’s one thing that people do like to comment on publicly at their leisure.

"I knew I was going to get those sorts of heckles so I worked out before I even stepped on a stage some things that I could say confidently if someone had a go at me, because there is nothing worse than a comedian who tries a sort of wet put down and it doesn’t work.”

That confidence is a vital tool for the stand-up comedian, she says.

“Audiences, as much as they are full of nice people, the vast majority of them are nice, once a comedian starts to lose it they are not sympathetic, they really aren’t, they can’t help it, they just hate you if you are not in control and you’ve lost it a bit. And you just lose them and they start to drift away from you, or they start to join in the heckling.

Whereas if you maintain a kind of confident façade … I just used to look at audiences as if I couldn’t give a toss, and that really does work because there’s something about comedians that are confident that makes people reassured and allows them to kind of laugh a bit more.”

The More You Ignore Me is in cinemas now.