Vegan food was pretty drab up until fairly recently, but today is an exciting time to be eating plant-based, says Ian Theasby of the English vegan cooking duo BOSH!

"About ten years ago... it was lentils and health food shops and mung beans and textured vegetable protein and it was all very dull and dry and boring. YOu've got to give a massive shout-out to anyone who was eating vegan food back then because they were like the pioneers." 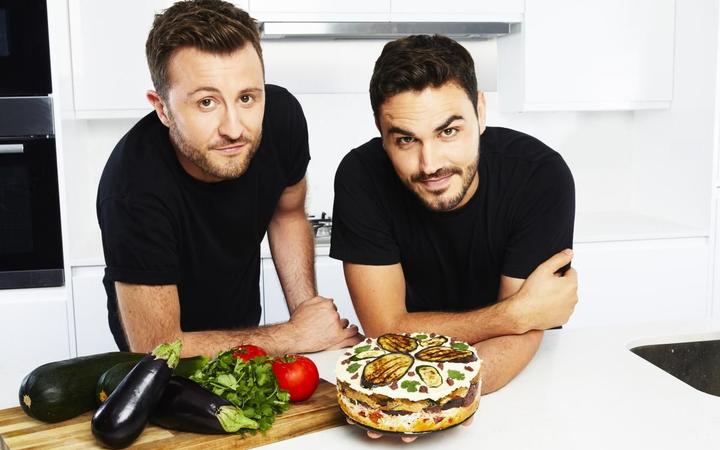 Ian and childhood friend Henry Firth - who have been dubbed the 'vegan Jamie Olivers' - host the Facebook video channel BOSH! and the TV cooking show Living On The Veg. Their first book BOSH! is the highest-selling vegan cookbook of all time.

In early 2015, Ian gave up alcohol, then went vegetarian, then vegan. A few months later, Henry, even though he was unimpressed with Ian's brown vegan curries, followed suit, largely for environmental reasons and inspired by the documentaries COWSPIRACY, What the Health and Earthlings.

Vegan chefs have "another muscle" that the average omnivore chef might not have to flex, Henry says.

"We need to recreate umami … umami, if your listeners don't know, is the fifth taste, a kind of savouriness that is really present in meat but not very present in plant-based foods. When we're cooking we're doing things like layering balsamic with soy sauce and red wine and red wine vinegar and maybe some vegemite - and we'll be layering those things into a chilli or lasagne to give it that umami flavour. Whereas if you were cooking with meat you'd just chuck in some mince."

Ian used to love a creamy fish pie so he created a vegan version. The BOSH! vegan fish pie - featuring mushrooms cooked with nori, caper brine and lemon and white wine - serves up notes similar to seafood and tastes a lot like the real thing, he says.

Ian Theasby and Henry First have a new book out called Speedy Bosh. You can find many more vegan recipes on their website.