The Kiwi researcher exposing the links between the religious right & Trump

A New Zealand researcher has helped expose how data is being harvested and used by churches in the US to micro target and attract vulnerable people into right-wing politics. 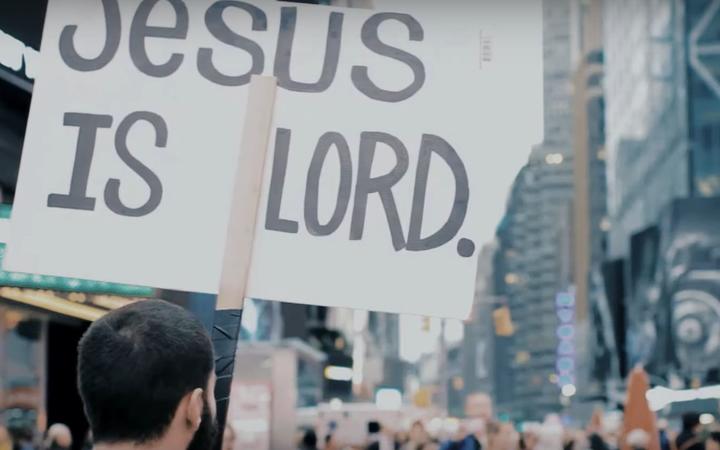 People You May Know  delves into what Cambridge Analytica was doing ahead of the 2016 election: working with a software company and deep-pocketed churches in America to gather information about people and encourage desired individuals to vote Republican and for Donald Trump.

The documentary follows Charles Kriel, a former specialist advisor to the UK Parliament, as he visits churches in the US and ends up going undercover at a high-level meeting of the Council for National Policy (CNP) - an umbrella organisation and networking group for conservative and Republican activists in the US.

Brent Allpress, an open source Intelligence researcher, based in Melbourne, helped uncover the activity. He tells Kathryn Ryan religious groups have targeted a democraphic of ‘unchurched’ citizens as part of a mission of religious conversion for years, but that from the outset this new targeting had more overt political intent.

There is a connection between the churches, church leader and the desire for political influence among those who make up the CNP, he says.

“It was framed from the outset as a way of improving the likelihood of having enough votes for presidential elections.

“There is a series of coalitions involved in this and there’s mutual benefit. They may not have all the same exact interests, but the Council for National Policy is an umbrella organisation for a whole bunch of broad right-wing groups formed in 1981.

“It brought together oil interests, large extractive industries and evangelical activists and dominionists who seek to end the separation of Church and State. At its most extreme I’d describe it as white supremacy, but it does have a lineage that goes back to push-back on desegregation in the late 1960s.”

Using search terms on the organisation’s website he managed to bring up a strategy document for the last five years. Armed with his discovery, a colleague then put him in contact with Charles Kriel, who was already making a documentary. The pair collaborated for about 18 months, setting up interviews with key figures for their project.

Allpress was asked to attempt to find out the next meeting of the CNP and he did so due to security design flaws on the organisation's website.

“What they had done was set up a kind of protection at the front end of the site, but they hadn’t protected any deep links.

“So, if you tried to search their website, I used the word ‘gun’ and I landed on place that had an entire hierarchy at the back end of the website, plus a search engine internally. So, from there I was basically able to archive the entire site… We drew on it selectively for the film.”

He discovered that the organisation had three meetings per year. "They are a mixture of donors and doers. So, they are activists and operatives and money, mostly oil money and Big Pharma money. Very, very closely affiliated with the hard Right in the Republican Party," he says.

Their end game is to control two-thirds of the state legislatures to rewrite the US constitution.

The primary group pushing all of this agenda he says, is Gloo, formerly a Christian mentoring body, he says. It is now a software company, which describes itself as an organisation “equipping the Church for what comes next”. Its website says this “requires a new mindset that combines the best of analog with the power of digital”.

Allpress describes the group as “Cambridge Analytica on steroids - a kind of hybrid”, allowing right-wing activists and the religious alike to amass intelligence on potential churchgoers and Republican voters.

“They are running Gloo inside the platform and it’s a micro-targeting platform. It has 2000 points of data on every American and if you have a certain level of access you can go on as a Church client and pick anywhere in the States… with a radius around it… and then use a few of the drop-down filters which are either demographic, religious, relationship or financial.”

Health statistics that includes mental health information on individuals also features, which Allpress claims is an apparent breach of privacy rules in the US.

He says pastors are encouraged to hand over data to these organisations.

“They all are. Each church when they gain access to the platform is very strongly encouraged to hand over any CSE files to their database of congregants or they’ll get APIs, software links where you can just export all of the congregation data straight into the platform.

“The intention then is they can use the platform to communicate to their internal audience, not just externally.”

The connections between the Christian Right corporate coalition and the Trump administration go all the way to the top, according to Allpress' research. This was reflected during the early days of Covid when Trump downplayed the significance of the pandemic and kept the economy open.

A signed letter from Mike Pence to the Council for National Policy he sighted thanked the group for amplifying the Government’s position on Covid-19 in March.

“We know from the Woodward interviews with Donald Trump that, in that period, they were actively downplaying the risks of the virus and they were seeking to keep the economy open.

“My assumption there in terms of why they’d be doing that when it’s such a public health crisis is that they’re fundamentally aligned with extractive industry oil interests and there was some evidence I had from other conversations through the CNP very concerned about the collapse of the crude oil price. It had already been flattened by the Saudi Arabians flooding the market and then when Covid-19 hit it just crashed…

“So, I would see most of the efforts to force open economies as an attempt to increase petrol consumption and demand through mobility."

The Evangelical Advisory Council often seen praying with President Trump is also partly connected to this wider agenda, he says. “Over a third and under a half from them are members of the CNP…

People You May Know is available for New Zealand viewers to watch on Rialto Channel, Sky Channel 39.