It received a $13.3 million government grant and involves iwi-led management of the environment. 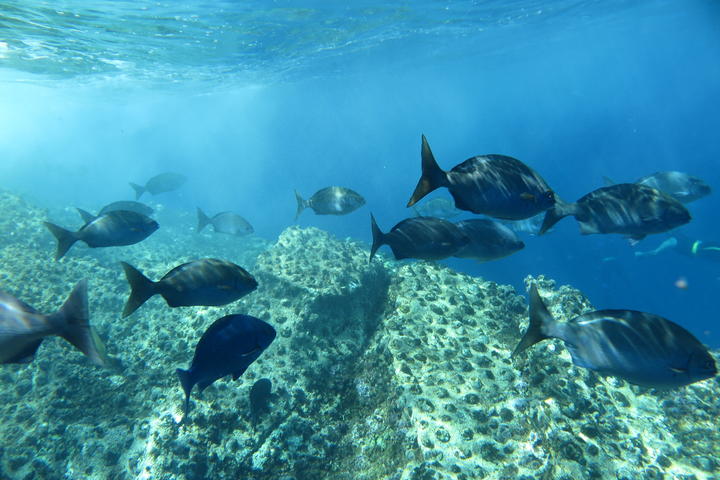 Rangitāhua lies halfway between mainland Aotearoa and Tonga and has been scientifically identified as one of only four pristine marine ecosystems on Earth.

The islands are uninhabited, except for the permanently-manned Raoul Island Station, the northernmost outpost of New Zealand.

The Station consists of a government meteorological and radio station, and a hostel for Department of Conservation officers and volunteers, which has been maintained since 1937.

Dr Trnski has visited the islands seven times since 2011. He tells Kathryn Ryan the environment is uniquely beautiful.

“I’ve been fortunate enough through my career to have done biodiversity surveys across the breadth of the South Pacific, all the way from the east Australian coast to French Polynesia and many islands in between.

“When I first started my career there were still many places that I would have considered pristine, with large populations of sharks and top predators.

“Unfortunately, that situation has changed radically in the last 30 years. But Rangitāhua is one of the few places left where I’ve been recently that still feels like a pristine ecosystem fully functioning.”

Ngāti Kuri's Sheridan Waitai says she has never returned home, but many family members had. The project would open up more opportunities for her iwi and others however.

“We have still maintained our connection, but it’s still not strong as obviously we would want it…It’s been the opportunity to carve out a whole new place in science and research across our whenua and muana and particularly in Northland.”

It will offer opportunities to fulfill obligations to be custodians of the land and sea.

“Everything on the land matches something in the water. So, if you’re trying to understand how you fit within that ecosystem, the things you can and can’t do and the agreements that you have to make in that environment on how you behave in it.

The government grant will build on the work already being carried out, she says. A stocktake of the taonga of land and water has established a baseline to work from and track their progress to build up the ecosystem or identify when the region is in further decline.

Waitai says the spiritual and material relationship that iwi have to the land and sea aligns well with an ecosystem approach to conservation.

“That’s why I think the connection between us and Ngāti Kuri has worked so well. We have evolved together to find out where our common interests are.”

He says scientists know the biodiversity reasonably well, but many new species are discovered during visits to the islands and that there is still much to learn.

He is currently working with colleagues at Te Papa to document 80 species of fish recorded there since 2015.

“When the known fish there are in the hundreds, 80 is a really big additional record for species distribution,” he says.

Rangitāhua can also act as a bell weather of change and over the past decade more tropical fish have been recorded in the area, when these are usually only seen in places like Tonga and Fiji, suggesting climate change is affecting the ecosystem, he says. Although visits to the region have also increased during that period.

“The place is unusual because it’s a mix of the two – a tropical and temperate fish species, but the clarity of the water is outstanding at times, which means the seaweeds can grow quite well. But what we still don’t understand about Rangitāhua is how the whole ecosystem works, because the water is very nutrient poor, so part of this project will be figuring out what drives and feeds the ecosystem effectively.”

Rangitāhua is near the Tongan trench and diving in the area has also uncovered large amounts of pumice, suggesting unstable areas within a dynamic environment for marine organisms to cope with, he says.

Waita says the Rangitāhua is part of the iwi’s good environmental management plan. The project will build capacity and new educational and research developments.

“We envisaged having a research station in Rangitāhua for us within five years. This carves out that opportunity for us to do that… but there also has to be one of the mainland and that’s what we hope to achieve by the end of the year.”