Jay Shetty is a former monk-turned-entrepreneur whose motivation videos online have garnered more than 6.5 billion views.

He has 27 million Facebook followers and his podcast, On Purpose, reached 52 million downloads in its first year and has become the number one health podcast in the world. 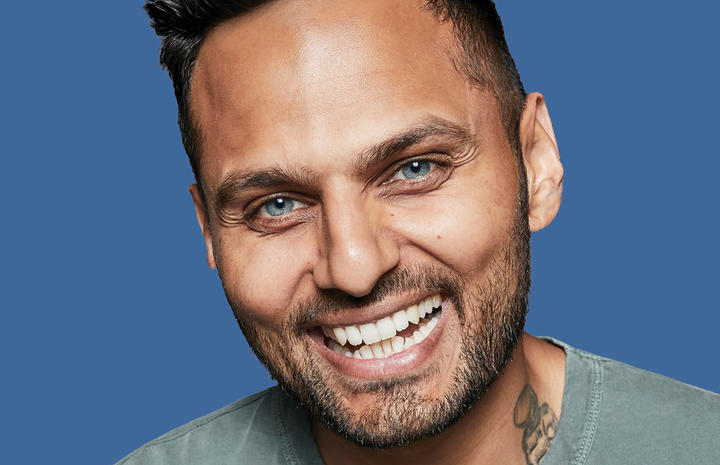 Shetty grew up in North London, the son of Indian migrants.

While studying business at university, a friend invited him to hear a Hindu monk speak, which led him to join an ashram in Mumbai, living as a monk for three years.

These days he lives in Hollywood, where he's in the business of inspiring happiness. He's just published a book called Think Like a Monk.

“My intention, when I started sharing the lessons and wisdom I learned from my monk life was simply to see how I could serve people," he tells Kathryn Ryan.

“I could see people feeling stressed and pressured, the anxiety in their life and my only intention was, how could I use some of these techniques. Whether they were meditation, whether they were intentional living, or principles around finding your purpose.

“If I could share them in a way that was relevant, accessible, and practical for people, that was my goal and I had no idea the amount of people that would respond.”

The hunger for his message comes from a desire to live more meaningful lives with greater purpose and a recognition that the path to happiness people had chosen had not been fulfilling, he says.

“I believe that people are smarter, deeper and more compassionate than we even know, and people are getting a chance to share and show that."

The moment of clarity for him came when he heard the monk speak at his university when he was 18. It was unexpectedly life-changing.

“The monk was speaking about how the greatest goal in life was to use what we had, our talents, our gifts in the service of others and that really resonated with me deep down… For me, trying to think about how I could live a life of service is what inspired me.”

After graduating from university, he spent three years studying, living as a monk across India and Europe.

The reaction of family was negative, his parents expressing concern and disappointment about a lack of career and dire job prospects.

However, time spent living among monks in India during holiday periods between university semesters offered self-assurance that his decision was correct.

“This is something that is really a big part of the monk mindset. You may have a goal in your life. You may have a passion, want to make a career move and everyone around you thinks its too late.

“Everyone around you thinks that it’s not possible and the only way you’ll muster the courage to do it, is if you’ve tested it, experimented with it, tried it out, you’ll feel that sense of courage to take the step into the unknown.”

Life as a monk was spartan, sleeping on a thin mat and waking up at 4am every day, having cold showers and meditating between four and eight hours per day. He says the morning period was dedicated to self and the afternoon to service.

“This was a beautiful principle I’ve learned that I think applies to modern life. The morning was very much about your own practices, your own meditation, making sure that you are taking care of your own mental, emotional and spiritual state.

“The rest of the day was service, whether taking care of the homeless, feeding children or building a sustainable village.”

The physical demands of the life were liberating, being free of devices and having a lack of material items, he says.

“I think anyone who has done a digital detox and stayed off their devices has experienced this.”

The life of a monk involves what he calls a continual transition of our deeply-conditioned ‘monkey mind’ to the monk’s mind.

“The transition is a daily habit. A daily practice and those three years at monks school gave me a very strong hold on the lessons. The last seven years since I left have really been putting all principles into practice.”

His book reflects timeless truths from ancient writings he studied and looks at the modern western science that backs these up empirically, he says.

After the three years he came to the realisation that he would be better placed going back home and integrating his new insights into western living. Being rejected by 40 companies when he went for job interviews was a tough time, with firms unable to see he had transferable skills that suited them.

Shetty’s meditative techniques however helped get him through, and he eventually got a job with a large consulting firm. Marriage also followed, something that would have been out of bounds as a monk.

Applying his principles and insight to the corporate world was something that excited him.

“I really understood that if I wanted to implement meditation and mindfulness inside organisations I’d need to work inside them to really understand how we could benefit them to reconnect with our life.

"So, I joined the global consulting firm and I was really fortunate inside the company that when they learned of my life, passion and experience, I was given the opportunity to share it inside company.”

The decision to break out on his own in 2016 came after he put greater faith in his message and how that same interest within his company would exist in the outside world too.

After approaching media companies, which rejected his ideas of producing a video series, he began production of the series using social media. “I never had any high hopes that it would take off in the way that it has.”

The entrepreneurial success in reaching global audience really began when his content was picked up by author Arianna Huffington, co-founder of The Huffington Post, the founder and CEO of Thrive Global. His content started being shared on The Huffington Post in 2016, giving huge traction to his enterprise.

“It was truly a tipping point and life-changing moment. And since then I’ve not looked back and continue to create.”

“I was really fortunate when I started helping people offline, I really got a chance to listen and understand people’s challenges at the core.

"I would often spend hours and hours with people mentoring them to deeply understand what was affecting them and at the same time I was so fortunate to learn from these timeless texts about that have existing for thousands of years and wisdom that has been there to help support our growth.

“My role has been to bring it together and with my content online I have always believed that the world can be transformed through entertainment and engaging in that way with an educational heart.

His message involves three stages in connecting with your authentic self and creating an active identity in alignment with one's dharma - letting go, growing and giving.

Letting go involves jettisoning your inauthentic identities to create an integrated identity aligned with most authentic version of our self.

“What we are really trying to do is go beyond all the identities that we’ve adopted at work, at home, with certain people," he says.

"We’re almost unlearning all of the conditioning and habits and beliefs that we’ve adopted almost unintentionally, or subconsciously, and we are not trying to go back to live an intentional conscious, curated life. We are actually choosing that.”

The principle of dharma can be translated as ‘eternal purpose’ or inherent nature and our goal should be finding it.

“It is said that we all have a natural tendency and it’s found when we find the synergy in our passions, our strengths and our compassion. We connect that to things that we’re actually good at or develop skills in things that we’re compassionate about.

“Finally, how to we use those in the service of others. How do we use that to make a difference in other people’s lives.”

Shetty lives when these three things are in alignment, joy and happiness are invited into our lives. When this are misaligned, our reality and sense of self is conflicted and lacks purpose.