Let's get sceptical: Tips from a professional doubter

"Don't believe everything that you see" is a mantra lived by Susan Gerbic. She's the founder of the Monterey County Skeptics group where she lives, and also Guerilla Skepticism on Wikipedia (GSoW)  a group that edits Wikipedia articles.

Gerbic and her team sometimes infiltrate the shows or online conferences of people who claim to be psychic or have healing ability in order to challenge them. 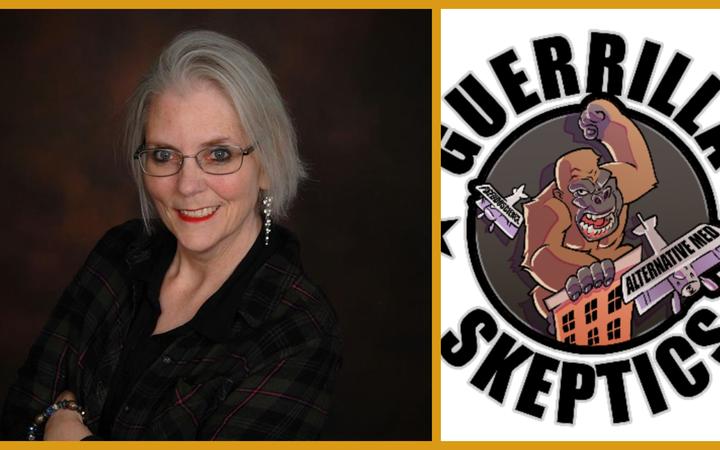 It is more important than ever to challenge dogma and irrational belief dressed up as knowledge or fact, she tells Lynn Freeman, as false statements proliferate on social media like a virus. Using basic critical tools of deduction is the vaccine, she says.

“A skeptic is a person who is open to, not a religion or anything like that, but open to hearing more, but likes to have the facts and wants to have it backed up. Anecdotes are not evidence and we surely would like to have lots of facts.”

Her team of skeptics is busy trying to keep ahead of the game, with projects such as Wikipedia editing being key in the drive to check irrational belief.

And the Covid-19 pandemic has intensified the battle and will continue to do so, she says.

“Vaccines are really a problem right now, with Covid misinformation. There’s always been push-back towards vaccines, a very vocal and growing anti-vax community. But, from what I think is going to happen when we get closer to coming up with vaccines, this will become a tsunami of misinformation. What we’re seeing right now is small potatoes to what we’re going to see in the month up to the vaccinations.”

Fear and social anxiety make people more susceptible to accept sources of misinformation in a time of uncertainty. Critical thinking is a solid defence against this, something lacking in some circles, she says.

“If you are inoculated against it and you have some good critical thinking skills and know how to evaluate a source and read, going to places that only have valid, reliable sources then you’re probably okay. You don’t have to have a scientific background to understand these things.”

Some of the false narratives put in check on Wikipedia include one page of 'Covid parties' - the urban myth that young people were attending social gatherings to catch the virus. Gerbic says the sceptics found there was no such thing and the story amounted to misinformation, based on media 'clickbait' reports on mere rumours. The page was rewritten.

Wikipedia is more important as a quick-search source of information than ever, within the top 10 web pages in the world, according to Gerbic.

“If you do a search on the internet with Google, you’re going to get box that’s going to pull up whatever information you’re looking for… often times that’s pulling directly from Wikipedia. We know the media often use Wikipedia. We find this constantly when we read an article on a subject or a person and we can see that they are using almost copy-and-paste from what was written on the Wikipedia page.”

One of the most high-profile pages the team has worked on is Blue Whale Game, which was said to have encouraged children to commit suicide.

“It was in the school system. It’s supposedly a suicide game and people were sending kids home with information saying check on your kids’ notebooks and look around if they are drawing any pictures of a fish and maybe possibly that your child is involved in this game.

"It was a really scary time and what was happening is, when we got involved the Wikipedia page was badly mis-written and it had a lot of information on it that was bad. We spent a few days and cleaned that page up. The Blue Whale Page was actually a hoax. Children are not dying from suicide games.

“There’s another one that’s kind of a cousin to it, called the Momo Challenge. We wrote all the Wikipedia pages for that and translated them into many languages. They are our most visited pages, even still a year or two later.”

Her favourite page is the pseudo-scientific ‘spontaneous human combustion’ page, the idea that human being can catch fire from within, something that had terrified her as a child. The myth was debunked and the page rewritten.

Team members are recruited on social media, mainly Facebook, who are trained after meeting criteria of having time to dedicate to reforming web pages.

A particularly focus for the group has been those who claim to possess psychic powers, or have experience discerning paranormal phenomena. Gerbic says these people tend to be exploitative and dangerous. Psychics and the paranormal industry was worth an estimated $2 billion in 2018, she says.

“We call them grief vampires, those are the people who claim to be able to speak to the dead… To me it’s a trick, I know how it’s done and you see people who are grieving and a lot of cases just been taken advantage of… It’s absolutely hurts to see them giving up their time and money and emotions. They’re really being drained of the memories they have of these people.”

The generalities psychics offer their clients are easy to replicate and their claims can be hence proven false. Her team regularly infiltrate psychic groups to expose their activities.

New Zealand psychic Jeanette Wilson has been confronted about claims of healing through spirit surgeons and that a Bluetooth device can administer vitamin doses.

Gerbic worked with members of the New Zealand Skeptics group, who emailed all venues booked for her national tour in a bid to shut it down after they infiltrated one of her ‘webinars’ to determine what type of views she expressed.

“She came to our attention a year ago after making claims that are anti-vaccine, anti-5G, anti-other health issues. She’ll not say ‘I’m anti-vax necessarily, she’ll just give the same type of talking points that an anti-vaxxer would…

“We recorded everything and there is a lot of content in there that I think she did not intend to be made public about her views on vaccinations and the new world order and then selling energy things, things that you could do to stop yourself getting ill from Covid-19.”

The recording was given to New Zealand media and then the team wrote up a Wikipedia page on her. Wilson refutes what has been said about her, saying her views have been grossly mischaracterised.

What motivates Gerbic is a desire to educate herself and others. Debunking pseudo-science is a passion and in the interests of the public good.

However, she expresses empathy and compassion for those who hold such beliefs, as no one is infallible, including herself. When younger she says she also shared dubious ideas that she had held as fact.

“I love the people who have these beliefs because I was one of them and I know how easily you can fool yourself and how hard it is to get yourself out of this situation.”

She professes the virtues of the empirical sciences as the ultimate measure of rationality, citing celebrity scientist Carl Sagan of model of ‘scientific skepticism’, the modern pinnacle of a philosophical tradition of logical positivism and reductionism.