Christopher McDougall is best known for his popular book Born to Run about the natural joy of running, the science of sport and super athletes.

His latest book Running with Sherman documents his decision to adopt Sherman, a badly mistreated donkey, who he trained to walk and run again - ultimately competing in an extreme race through the Rocky Mountains. 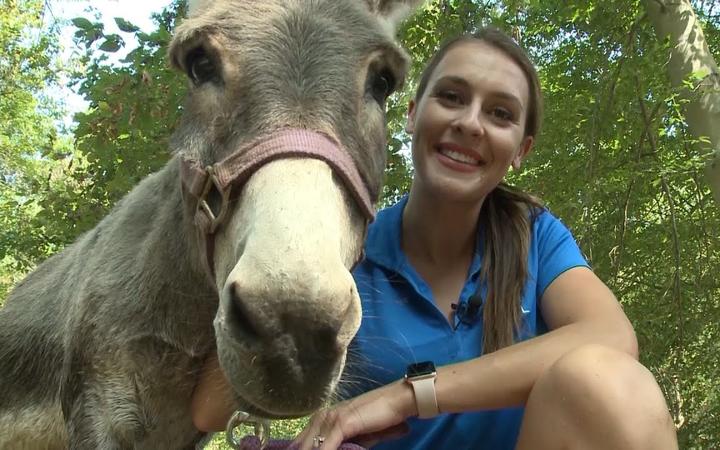 About twenty years ago McDougall and family moved to rural Pennsylvania, an area with a strong Amish and Mennonite community.

They came to hear of a donkey that was being kept in terrible conditions by a neighbour who had mental health problems and was a hoarder.

McDougall’s daughter said she wanted a donkey for her birthday, so they set out to see if they could re-home this poor animal.

With the help of neighbours they persuaded the owner to give over ownership of the donkey to the McDougalls.

“He finally relented and agreed to give it to my daughter for her tenth birthday, which could have been the worst birthday present of all time because I’m not going to lie, he was on the verge of death.”

When they first met Sherman he was living in appalling conditions, McDougall says.

“I harboured such rage at the poor guy who kept Sherman imprisoned because when we first walked into that barn and saw the tiny little dungeon stall that Sherman was locked into and all the muck … the stench.

“The stall was so narrow he could barely turn around and his hooves had not been trimmed in years.”

When Sherman arrived, he was in worse shape than McDougall imagined.

“We only got a look at him in that stall, there was no natural light and that muck was almost up to his knees.”

But daylight revealed the true picture and McDougall had a pang of panic about what he had taken on,

“I can’t nurse this creature, I’m not qualified, I couldn’t even get him out of the wagon and Wes [his neighbour] and I had to kind of hoist him out and I really understood how sick he was when he was standing in this luscious, green spring grass and he didn’t bat an eye.”

The donkey was practically catatonic and some of his neighbours said the kindest thing was to put him down.

“Stupid optimism” kept him from going down that path.

"Ignorance is a life saver. I just looked at him and said let’s do our best.”

And his neighbours chipped in to help Sherman recover.

“Scott, I’ll never forget that he showed up to trim Sherman’s hooves, he looked at this disaster of an animal and dedicated the next few hours to a very hard, dangerous job of trimming this donkey’s hooves with a hacksaw.

“I looked at that kind of devotion of somebody else to a creature in complete awe.”

Tania, the local vet, saw something in Sherman, a spark of life, he says.

“She threw herself into it and for two years Tania was by our side non-stop.” 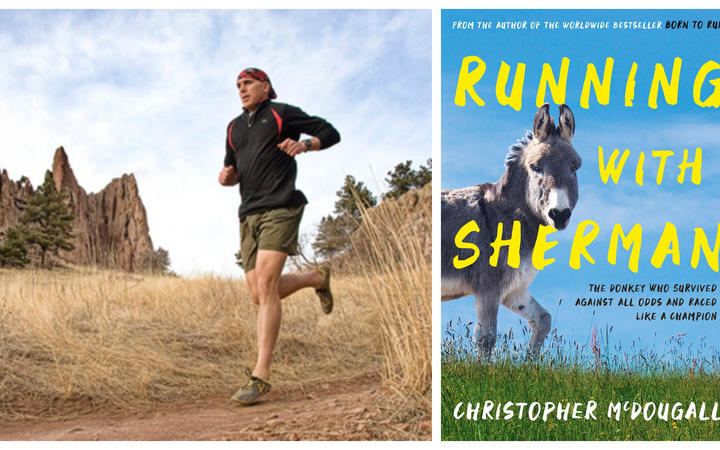 When Sherman arrived, Lawrence walked up to him and stuck by his side.

“I can only guess that whatever instinct made Lawrence want to be around children, maybe creatures that were vulnerable or small or whatever, he could sense something in this donkey .. OK this one needs help.”

Tania told him animals need a purpose and he had to get Sherman a job.

“He’s in despair you’ve got to find him a job give him a purpose. That was her guiding principle, every creature needs something to look forward to when they open their eyes in the morning.

“But you can give a donkey a job, but a donkey doesn’t necessarily know he’s been given a job or wants a job.”

McDougall hit upon running, something he enjoyed that might also bring Sherman out of his shell. A tall order given he could barely walk and was afraid of hard surfaces as his hooves were so sore.

“I wonder if I can make this animal my running partner? And as soon as I had that thought I came up with another one.

“I’d been in Colorado ten years earlier for this weird event they have where you run next to your donkey.”

Pack Burro Racing started in Colorado in the Rocky Mountains in the 1800s, McDougall says.

“There were prospectors out looking for gold and when they would strike gold they would run back to town as fast as they could with their donkeys in order to register the claim.

“So now you’ve got a bunch of miners in these far off towns, they’ve got gold in their pockets, they’ve got time on their hands, they’ve got donkeys outside and they start to bait each other that they can run faster with the donkey than the other guy.”

In 1951 it became formalised as an actual sport, he says.

But Sherman needed coaxing into his first tentative steps off the grass.

“Tania said even though his hooves are very ginger and sore they are not going to get better by rest you have to stress them now.

“Tania said anything you want the donkey to do make him think it’s his idea, so the brainstorm was grab Lawrence and let Lawrence out on the road and it worked like a charm.”

Sherman started to walk across the grass right behind Lawrence, but when Lawrence went out onto the road, Sherman stopped dead.

Tania’s rule number 2 for training donkeys came into play at this point.

“One thing with donkeys, anything you start you have to finish. Donkey’s will process something and never forget. If you try to do something and surrender, the donkey processes it to understand OK was right in the first place, whatever he was trying to get me to do was probably dangerous, good thing I didn’t do it, now I’m never going to do it.”

Tania took a rope put it around Sherman and walked out to the road with the other end of the rope. A tug o’ war ensued.

“For more than half an hour she sat on this rope and finally Sherman put one hoof on the asphalt and stood there and Tania said ‘Good let’s call it a day.’”

From that first small step a long journey to recovery was started.

“That’s literally how it started with a 30-minute tug of war to get him to place one hoof on an asphalt road.”