Boris continues to back his man, despite pressure from MPs

Prime Minister Boris Johnson is under increasing pressure to sack his adviser Dominic Cummings over his lockdown trip out of London while his wife had Covid-19 symptoms.

The Prime Minster says it's time to move on - but will his Tory colleagues let it go?

UK correspondent Harriet Line told Nine to Noon there is mounting anger from the public and calls within Jonson’s Conservative party to sack Cummings. 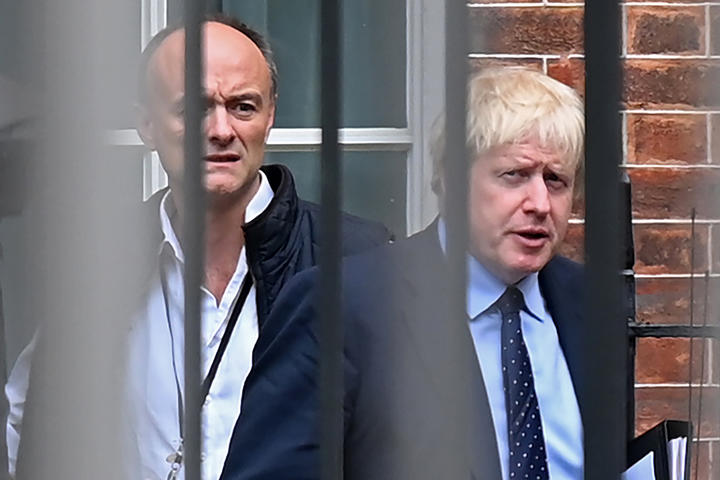 “There are now just under 40 Conservative backbenchers who have called for Mr Cummings to quit or to be sacked, and a senior minister Penny Mordant has said there are inconsistencies in his account and there is no doubt he took risks.

Johnson appeared before the influential Commons Liaison Committee yesterday where he was grilled over the Cummings affair from MPs across the house.

“The PM hadn’t appeared before this committee before, and it usually grills prime ministers a few times a year, the prime minister has been PM for coming up for a year now and this was his first appearance.

“He faced a lot of questions on Dominic Cummings issue and his handling of it, the prime minister really desperately wanted to move on, but the chairmen weren’t really giving him that opportunity, they gave him a good half hour of grilling on this particular issue.”

Johnson told the committee the public wanted politicians to focus on more important matters, she says.

“He tried to brush it off as a political ding-dong, saying there were inaccuracies in some of the reporting although he refused to say actually what has been untrue.

“But I think it is quite clear the public is very angry with Mr Cummings’ actions and the Conservative poll ratings have absolutely plummeted this week in light of the row.”

A poll for The Times newspaper yesterday suggests the Conservative lead over Labour was cut by nine points in a week, while the opposition Labour Party added 5, she says.

“But it does look as though the prime minster is pretty set on keeping Mr Cummings so the questions now is how damaging will it be in the long term for the Government and also what impact it will have on the public’s adherence to the lock down restrictions.”

The Government looks determined to ride the affair out, she says.

‘It is aware of the huge amount of damage that’s been done already and perhaps there’s not that much for them to gain by him leaving now.

"I don’t think it is hugely likely he will go, but it is problematic for the Government having a revolt on its backbenches. That is where this issue will be dictated from.”

Johnson announced the test and trace system would be up and running this week, she says, although the tracking part of it has been dropped.

“The prime minister was desperate to announce this today when he was getting this grilling from MPs.

“This test and trace system, it was just track and trace but somehow we’ve lost the track, quite possibly because the accompanying app that was meant to go with it has been delayed by many weeks.”

From tomorrow 25,000 contact tracers will begin starting to trace the contacts of people with coronavirus, she says.

“And that’s to stop the second wave of the pandemic that all countries around the world are very fearful of. Under these plans anyone with coronavirus symptoms will have to immediately self-isolate and then book a test.”

If that test is positive, tracers will contact everyone who has been within 2 meters for more than 15 minutes of the person testing positive, she says.

“There’s quite a lot of concern that this system is relying on goodwill and the health secretary Matt Hancock called for people to carry out their civic duty to make the system work and he said the only other option was to continue with the lockdown.

"So, there is a lot of reliance on people taking part in this and also for people to be reporting accurately who they met.”