Like many folk musicians, Rhiannon Giddens isn’t afraid to carry the weight of history in her music.

She and partner Fransesco Turrisi are multi-instrumentalists, collaborators and music historians. They have been in Wellington for The New Zealand Festival of the Arts. 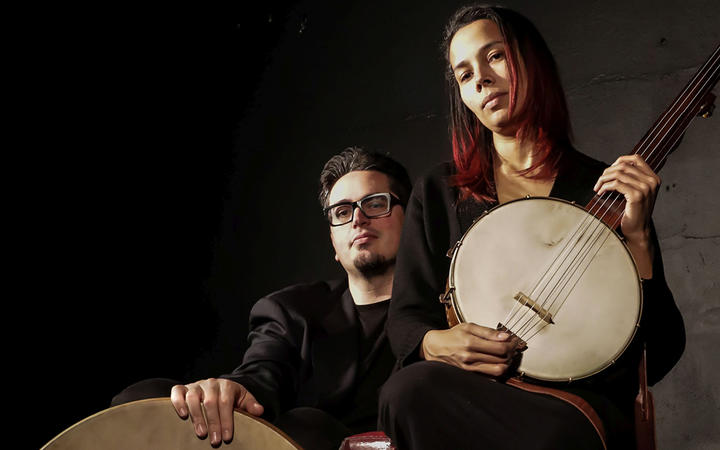 “Our very diversity is a beautiful thing… we all have the same emotions but how they’re expressed is different and when you kind of dig underneath you realise they’re actually coming from the same source and that’s the beauty of being connected,” Giddens says.

Their track, Ten Thousand Voices, tells the history of how the pair met and started to experiment with sound despite coming from very different backgrounds, says Turrisi.

“It’s like these universes don’t really touch each other, they rub off on one another.”

They discovered a lot of things worked together well.

Much of Turrisi’s research is about the influence of the Arab world on the Mediterranean in the late Middle Ages and the early Renaissance.

“A lot of people don’t talk so much about the fact that a big percentage of slaves that came into the Americas were actually Muslims, and the Moors had a huge influence of West Africa as well.”

They were finding layer upon layer of connections, says Giddens.

“It all goes back down to; people move. Whether they are moved, or they move, whatever the impetus is, people move and where they moved they are affected and they affect. That’s it.”

It’s something the pair discovered through music, and they now use music to bring this knowledge to others.

The instruments themselves even speak about this history.

The lute, for example, came from the Arab world, and when it found its way to Europe it was fretted, says Turrisi.

The banjo is an African-American instrument that comes from West African lute-type instruments, which had come from the Middle East, says Giddens.

In the 1600s-1700s, the banjo was known as a black instrument, the image of plantations always had a banjo, she says.

Then it made a transition from black culture to white culture.

“In the 1820s and 1830s white Americans start to play it and it eventually becomes fretted and known as a white instrument.

“Blackface accompanies the banjo and it becomes wrapped up in that,” she says.

In a nutshell, there were three things happening, Gidden says.

“The great migration, six million African Americans move from the south to the north and the east to the west…you have a cultural shift.

“Then you have the advent of the commercial recording industry… the creation of genres and the segregation of American music starts here…it’s to sell records.

It was a carefully crafted narrative that can be seen today, she says.

Little Nas X, who is well known for Old Town Road, is an example of this.

“He was at the top of the country charts. They took it off when they realised he was a black guy…the country establishment’s like ‘woah, that doesn’t sound country enough’.”

Giddens says there’s a constant erasure of culture and people don’t know their own history.