When there's a crime reported in Australia, lawyer and human rights advocate Nyadol Nyuon thinks 'please let it not be a person of colour'.

"You know that, generally, people of that background or culture will be held to account," she tells Kathryn Ryan. 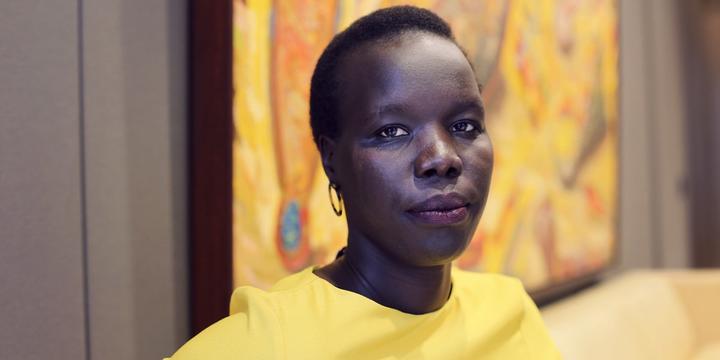 Back in 2018, Nyuon made headlines for her part in a Twitter debate over an alleged "crisis" of Sudanese gang violence in Victoria.

Australia's Home Affairs Minister Peter Dutton told the radio station 2GB that Victorians were "scared to go out in restaurants" because of "African gang violence".

Nyuon tells Kathryn Ryan that she tried to point out that the media was exaggerating what was happening on the ground.

The fear of 'ethnic' gangs in Australia isn't new, but the appearance of Sudanese people – "very tall and very dark" – adds another layer to it, Nyuon says.

"The problem of a few young people was being made to be the problem of everybody who happens to have a black skin.

"All of us, especially South Sudanese, felt as if we were under siege. It was constant, constant negative media coverage."

Nyuon accepts some young African Australians engage in criminal behaviour, but the Australian media tend to overemphasise race, she says.

"You could end up with the same conduct involving two different groups and the only group that would have their race mentioned is the group who happen to be black.

"What was really being cast as the source of these young people's behaviour was their caste or their race, when if we were talking about about a group of white people what tends to be emphasised is the socioeconomic issues that put those young people at risk of engaging in criminal behaviour.

"When we focus on race, we cage people and stereotype them into positions where no matter what they do they're bound to fail."

Nyuon avoids reading certain newspapers and websites because she doesn't want to be exposed to racist abuse.

"Even if they're telling a positive story of a black person or a brown person I won't even read the comments … some of them can be quite violent and quite confronting.

"It's quite easy to get angry when you're constantly being invited to remind people of your humanity. It's quite obvious to me that I'm a human being and that I'm supposed to be judged by the content of my own character.'

Nyadol was born in 1987 to a politically engaged and very strong mother who stood up to Nyadol's father, a well-known guerilla fighter.

She grew up in a refugee camp in Kenya, and at the age of 14 knew she wanted to be a lawyer.

At 18, Nyadol came to Australia and got into the prestigious Melbourne Law School. It was very hard, she says, but support from lecturers and inspiration from fellow students got her through.

"Sometimes without knowing, particularly if you come from a refugee background or a poor background … you tend to internalise certain stereotypes about yourself and how far you can go. And what Melbourne Law School did was that it surrounded me with really talented and smart young people who expected excellence of themselves every single time. Excellence wasn't an accident, it was an act, a commitment - and that was a radical shift for me in realising I could also adopt the same mindset."

Nyadol always thought she'd get into human rights law but when it came time to apply for a job, it was commercial law that offered the most rewarding challenge.

"I told myself you're going to try and do something that you never thought you would do.

"The challenge was to see whether I could survive. And I told myself I could do well then it would mean I had grown as a person but I had also grown intellectually."

Life doesn't give any of us breaks, Nyadol says, no matter what we've already gone through, and it's okay to throw yourself a 'pity party' sometimes.

After her step-sister died in a car accident, Nyadol had a lot of anger to process.

"I had somehow come to believe that I'd gone through enough in life and somehow God or life was just going to give me a break now … I came to realise that you don't get a break if your life was hard in the past … it's hard, its absolutely damn hard sometimes, but you give yourself a pity party and you keep going on."

In 2019, Nyadol Nyuon was awarded the prestigious 'Racism: It Stops With Me' award by the Australian Human Rights Commission.

On 14 March, she will appear in Wellington as part of the New Zealand Festival event Who are we now?