Is it possible to create sugar-free, gluten-free and dairy-free recipes that are tasty and good for your gut?

Award-winning chef Bridget Davis is back in New Zealand for the release of her new book 'More from Bridget's Healthy Kitchen' with 100 more gut-healthy recipes.

She shares a recipe for 5 min Feijoa and Coconut Cake with Kathryn Ryan and talks about how cutting sugar, dairy and gluten from her diet transformed her life. 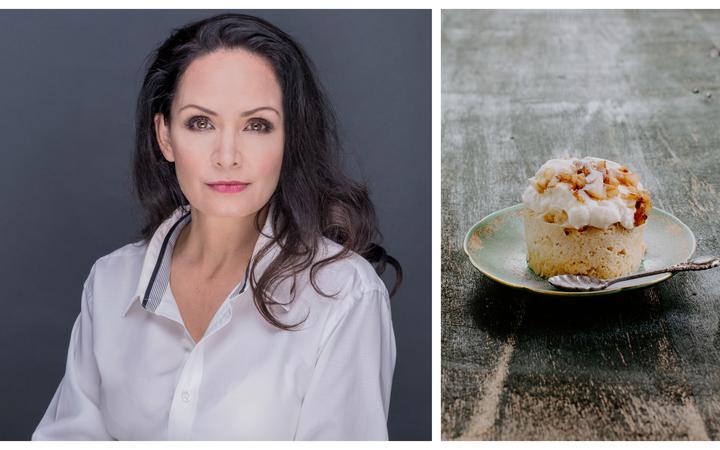 “When I really started to dive deep into the health and wellness of our gut, and realising just how big our gut is and how much work it does, and coming across terminology saying that your gut is your second brain, there's so much that goes on in there that directs so many other aspects of your life, whether you're sleeping well, whether your moods are okay, whether your hormones are balanced, suddenly it was making so much sense in terms of what I was struggling with with my own diet,” Davis says.

Quite apart from weight loss, Davis noticed other aspects of her health improving dramatically, she says.

“I was suddenly a nice person to be around, because I have to say, you know, my kids would say mum's a bit grumpy, that sort of stuff. And suddenly I was happier, I had more energy, I was sleeping better, my moods were balanced. And all this came from changing my diet.”

Taking sugar out of her cooking has been a case of capturing the natural sweetness in ingredients, she says.

“I don't raise my blood glucose levels, so I don't do refined sugar. I don't do anything like coconut sugar, I don't do honey, I don't do maple syrup. I've taken all of those things out of the recipes that I've created, but I'm still able to give you a most amazing chocolate Afghan.”

“I've learned to include things like inulin powder, which is a prebiotic fibre, so it's really good for your body.

“It's 100 percent plant-based, but it has a slight sweetness to it. So not only are you adding a prebiotic which is good for your gut health, you're also adding a fibre which is good for keeping your regular .. but it's slightly sweet and absolutely zero - almost zero calories.”

“I just love to be able to go into the kitchen and if I really want something sweet, something delicious and I can make this feijoa and coconut sponge cake in five minutes.

“It’s so simple to make. You don't have to use feijoas because I know it’s a very seasonal product, you could use stewed apple or maybe some ripe banana or a bit of pineapple.”

“You put everything into a mug and it's got a little bit of ginger powder in there so it's lovely and spicy. There's some desiccated coconut little bit of almond flour. Everything gets mixed together in a mug with an egg and then you pop it into the microwave and two and a half minutes later you have a feijoa and coconut sponge - little bit of coconut yogurt on top and dessert’s done.”