More than 10 million hectares of land has been razed this bushfire season and has resulted in the longest spell of dense air pollution on record in New South Wales. 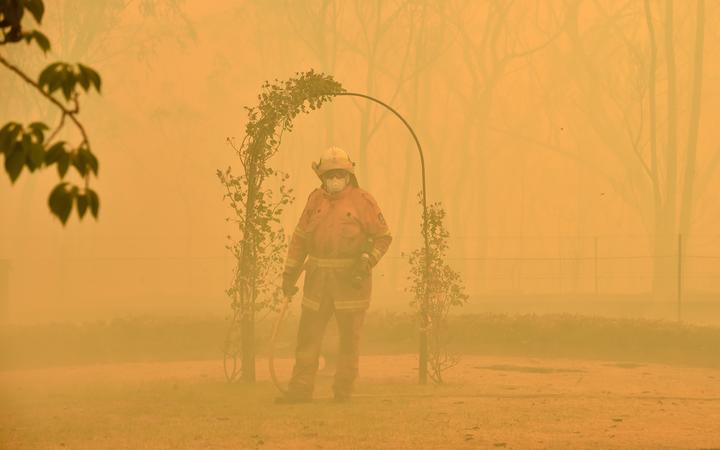 Estimates put the co2 release from the fires at 400 million tons, which is close to Australia's total annual greenhouse gas emissions of around 500 million tons of co2 equivalent.

At times dense smoke has blanketed large parts of Australia bringing with it poor air quality that's not only affected breathing, but has also collected in buildings setting off smoke alarms.

He told Kathryn Ryan the smoke posed a number of risks, particularly with fine particulate matter.

“What we talk about is PM 2.5 so it's particulate matter that's smaller than 2.5 micro meters, that's a millionth of a meter.

“So this is, many times finer than a human hair, for instance. And the issue there is that it's so fine that it can penetrate all the way into your lungs and actually make its way into your bloodstream, where it can affect basically almost any system in your body.”

In the long term, this particulate has been linked to cancers and the neurological development of children.

“It's much harder to study and tease out the long-term effects but we know these particles are not healthy.”

He says air pollution is not something Australians are used to dealing with.

“We would say if the air quality has reached hazardous levels that you would just stay inside. Try and avoid being outside in the polluted air, but if you have to - wear a gas mask, one of these P2 filter masks, so unlike the cloth hospital masks they actual have a small filter in them.”

The other advice is to try and keep the air inside clean, he says.

“Close the windows, maybe look for where air is getting in around windows or under doors and kind of shut down your house so that you're not letting in as much of the smoke as you can.

“And then once the air clears outside you want to vent open up paths again and try and ventilate it.”

When Canberra recently had some of the worst air quality in the world, it lingered for days he says.

“They had a week, maybe of really poor air quality, they didn't really have the chance to flush out the air inside a house.”