Amanda Palmer - There Will Be No Intermission

She's one half of the self-described "Brechtian punk cabaret" duo The Dresden Dolls - and in 2012 released a solo studio album that was paid for by a crowd-sourcing campaign.

Reviews have described the show as heartfelt, shocking and hilarious. 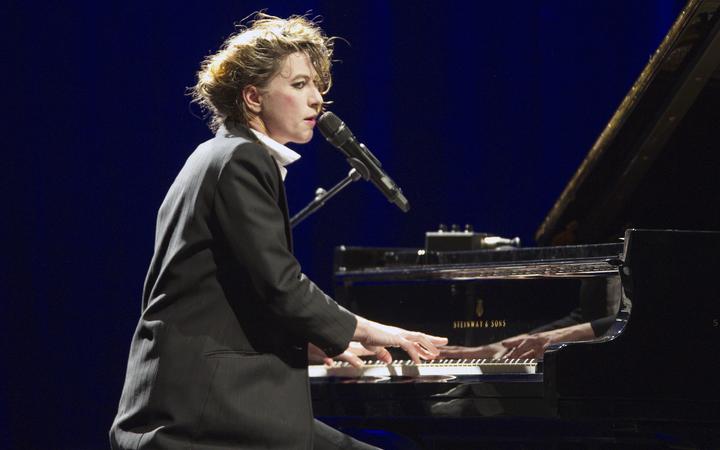 She tells Nine to Noon she’s not shy to be political when she feels strongly about something.

“It’s the responsibility of every American citizen to take responsibility if we really want to say we live in a democracy. If nobody takes responsibility, the whole thing goes up in flames and I feel like that’s sort of what’s happening.”

Palmer says she was a hardcore Bernie Sanders supporter in the 2016 presidential race, and although she supported and voted for Hillary Clinton when she won the democratic nomination, she didn’t fight and campaign for her.

“I didn’t give money and I didn’t ring the bell because I guess we all thought she just had it in the bag. I don’t think anyone’s going to make that mistake this time around, and I really hope they don’t.”

She says it’s not a coincidence her new show is the most political one of her career while Trump is in office. At roughly four hours long, she admits an 80 show tour is quite exhausting.

“But, it’s also a really fulfilling job to go around, especially in times in darkness and despair. It’s a hard show in one sense, but it’s not a technically hard show, it’s an emotionally hard show.”

Palmer says the show is a story-telling session, and seeing the emotional impact it has on her audience makes it easier for her to deliver.

“When I talk to people after the show, or I see them in the street the next day, it’s so impactful because it directly addresses issues that are taboo like abortion, miscarriage, grief, depression, and death. That might sound really morose and depressing, but actually it’s a relief to a lot of people to be in a theatre laughing about that kind of stuff and hearing me singing little silly songs about it.

“It feels more medicinal than any tour I’ve ever done and that makes it easy, because I know it’s working and it’s helping people.”

She says that even if you can’t relate to specific tragedies addressed in the show, everyone can understand grief and loss, and that’s what makes it so powerful.

“We live in such a secular society and this is the sort of thing people used to get out of church, something that most of me and my friends don’t do. I just feel like it’s really important to sit around and talk about these things and think about them.”

She says the main thing she hears from people who see the show is that they leave the theatre feeling less alone.

“If I have a single job as an artist, when it all comes down to it, that really is the core of my job description if I nail it; is to help people and make people fell less alone.”

Palmer was an earlier adopter of crowdfunding techniques, releasing an album after a round of kickstarter funding in 2012, and now having her blog and music released through Patreon – a space that connects her more intimately with her fans.

“We’re so used to ‘what is the product and what is the cost’ and ‘how much are they paying you per song’. We’re just working completely off-grid [on Patreon] and outside of that artist-backed market capitalist system where an artist is like a factory.

Amanda Palmer is performing There Will be No Intermission at The Auckland Arts Festival on March 12th, on Saturday 14th March at The Piano in Christchurch, and on Monday 16th March at Wellington Fringe at St Peters Church.