The New Zealand robin (toutouwai) weighs just 30 grams but it can take down a tree weta, slice it, dice it and store what he doesn't need for later.

Victoria University researcher Rachel Shaw has looked at the behaviour of the toutouwai - the only animal in New Zealand that hunts and then saves food for later in the day. 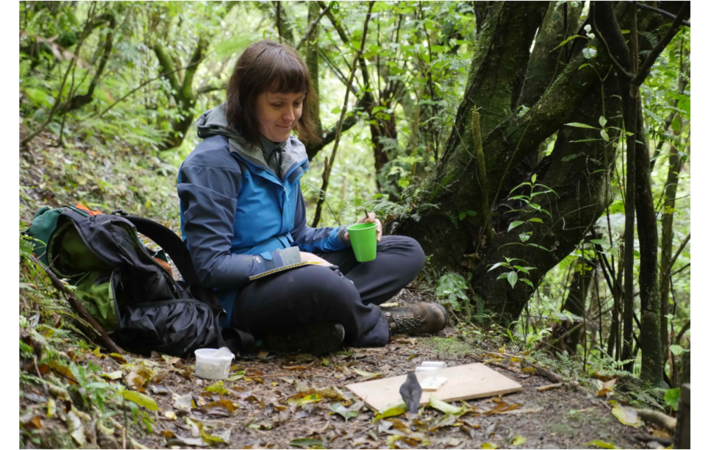 "There's a lot of different species that will hide food but toutouwai is fairly unique in the way that it takes down these huge invertebrates, so some of the world's largest insects like the giant weta, and cuts them up into chunks to hide around the forest canopy and snack on throughout the day," she told Kathryn Ryan.

Her observations at Zealandia in Wellington show toutouwai can comfortably hunt tree weta.

"Also large earth worms, you quite often see them pull out earth worms up to half a meter long and then sort of spend ages processing them and cutting them into smaller pieces to hide about the place."

And this behaviour makes sense, she says.

"If you only weigh 30 grams and you've got a huge amount of food, it's a nice solution for that not to go to waste if you can actually hide it - but then crucially remember where you have hidden it, because obviously it's a waste of your time to invest energy in hiding something if you don't know where it is."

Most birds would typically eat until they're satiated, she says.

"They would be aiming for prey that they can easily consume; and consume in one sitting."

To store food, and remember precisely where, requires cognitive ability, and to test just how smart these birds, are Shaw devised an experiment.

She says the nature of New Zealand's birds and the toutouwai's territorial habits, made this possible.

"Most species tend to avoid humans. And they won't readily come and kind of interact with a scientists in the field who is hoping to robustly quantify and measure how good their memory is.

"In New Zealand, because we've got these birds that have evolved without mammalian predators, they are incredibly bold and curious. And so that makes them really, really tractable for asking these kinds of questions."

Shaw conducted her experiment during winter, with a kind of food puzzle she created.

"I went out with a circular puzzle that had different locations in it. And I set this up on a bird's territory, always at the same spot, and always with just one piece of food hidden inside the puzzle.

"And then I measured across a single day, how many mistakes birds were making when they were searching for that food. And what I found was that over time birds were making fewer and fewer mistakes. So this suggests that they were in fact recalling or remembering the specific location to go to."

She then measured the number of mistakes toutouwai made during the day, which gave her a measure of the spatial memory for each individual.

"I followed those same individuals through the breeding season and what I discovered was those males, the ones that had made the fewest errors, actually were producing more chicks, and more independent offspring per nest."

Then females were less skilled on the memory front, she says

"At least in the way that I measured it, it doesn't have the same kind of importance, so it could be that for females there is another cognitive trait that matters more when it comes to reproductive success. So that was a pretty intriguing difference between sexes".

Toutouwai males have one job - feed the female, she says, and so she suspects this male memory trait is for sound reasons of survival.

"In toutouwai, the female is the one who builds the nest, obviously lays the eggs, but then incubates the eggs, feeds the chicks, and while she does that, literally the only job that the male has is to make sure she and the chicks are well fed."

"Obviously she is reliant on having a good mate to feed her as she's incubating so she can actually stay on the nest. And she doesn't get so hungry so that she has to leave and risk the eggs getting cold and potentially dying."

Dr Shaw will be sharing her knowledge about bird brains and what they tell us about the evolution of intelligence at a talk in New Plymouth as part of a series of lectures celebrating Marsden funding.