Ever been lost for words? Well, surprisingly, you might just find what you need to express yourself in 17th or 18th-century slang that's filled with words comically handy to use in the 21st Century.

Joe Gillard has put together a guide of old-timey linguistic gems that once gave colourful expression to the English language. Words like honeyfuggle (to flatter someone), ninnyhammer (fool) and collywobbles (nervous anxiety).

His book is called The Little Book of Lost Words and it's providing delight to history buffs and word lovers alike. 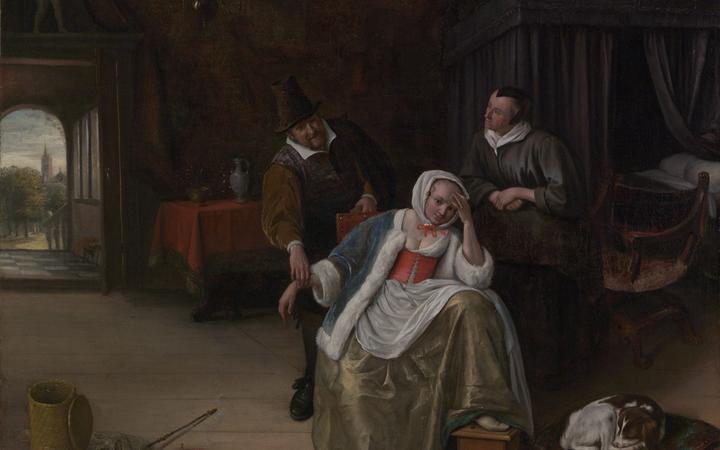 Joe Gillard is also the founder of 'History Hustle' a digital publication for history fans with more than 320,000 loyal social media followers.

He told Kathryn Ryan he set up the page after noticing that other subjects, such as science, were dipping into more “hip” modes of narrating online.

“I feel that because this book came out of that project, that I’ve really been able to learn kind of what makes a history buff tick, and what a history buff loves, and what brings them to history.”

Although there is a difference between a history buff, who simply has a passion for the subject, and a historian, an expert educated in the field, he says.

But Gillard believes his platform bridges the gap between interest in history and the more traditional and scholastic offerings. He says he aims to link stories of the past with how people experience culture today.

The Little Book of Lost Words stemmed from a video compilation he made of old words which got 30 million views.

“I think I learned from that ‘wow this is something people really love’ compared to all the other content I produced, this was by far the most engaging to the audience.

“They loved that they could learn these words and then put them in a sentence and use them and write about them or talk about them.”

After doing research into old slang, he managed to narrow the words down to about 300 for his book. Most of them derive from the 17th and 18th century, which Gillard says was a prime time for inventing funny-sounding words - it was also the time of the inkhorn controversy.

“The inkhorn controversy was basically mostly in the 17th century and 18th-century people were making up all these words from Latin and French phrases to kind of meet the needs of all the science and things were happening in Europe at the time.

“And the controversy comes in that a lot of people said 'let’s rein it in a little bit, we’re adding so many words to the language right now, we’re at risk of losing what English means'.

“So there was a little bit of backlash against creating all these new words out of Latin and Greek origins, so you end up with this cornucopia of old words that just dropped out of use.

There are many slang words that we don’t use anymore, but here’s some that you might find interesting.

To groke or groak - Stare at somebody while they’re eating, hoping they’ll give you food

Downdrins – An afternoon drink, for example, ‘let’s go to happy hour and have some downdrins after work’.

Mumpsimus – A stubborn person who refuses to change their mind despite being proven wrong. The origins of the story come from a catholic priest who was reading a prayer and mispronounced 'Quod ore sumpsimus, Domine'. He was corrected but, being a stubborn man, continued with Mumpsimus. People took that word and brought it out of the church into general expression.

Betweenity – English writer Horace Walpole used it in some kind of philosophical argument to describe the state of being between two extremes.

Fudgel – (verb from 18th century) pretending to work without actually doing anything.

Blateroon – someone boasts and brags constantly.

Slugabed – someone who sleeps in later than is appropriate (Shakespeare coined the term in Romeo and Juliet).

Sciolist – (17th century) a know-it-all or someone who pretends to be knowledgable on subjects. It comes from the same root as the word science.

Egrote – (verb) pretend to be sick to avoid work.

Ultracrepidarianism – (19th century) a person with opinions on subjects beyond their knowledge.

Gardyloo – (origins of Scottish dialect) Formerly used as an expression shouted out the window to warn pedestrians they’re throwing wastewater out, perhaps derived from the French version, garde à l'eau!

Fandangle - a splendid but useless ornament.

Snollygoster – a clever person, especially a politician, who cares more for personal gain than principles

Amphigory – a piece of writing that looks like it has meaning but is just nonsense.

Sonntagsleerung - a German medical term from the early 20th century for “the depression one feels on Sunday before the week begins.”