Hunter Johnson grew up in a typically masculine environment and says rugby union was his religion, but the impact this had on those around him was at times immense and there was a number of suicides at his footy club.

“What we’ve discovered is that we’ve inherited these rules, these unspoken rules around what it means to be a man, that in our context growing up, to be a man was to be strong, to be courageous and to show no emotions. What was missing in that for us was just a safe space for us to talk about the more vulnerable things.”

Vulnerability wasn’t even in his vocabulary as a 16-year-old, he says. 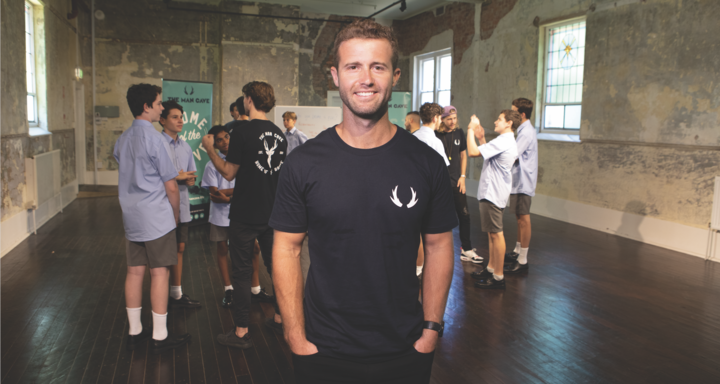 When a teammate took his own life after a big weekend, Johnson says at age 22 he and his best mate mustered up the courage to start running programmes in regional Australia to create a space for boys to develop language to talk about their feelings and practical skills to help them deal with what’s going on in their lives.

The programme went down really well and Johnson quit his job to work on it full time, founding the organisation The Man Cave. It’s been delivered to tens of thousands of young men across Australia.

He says when he was a teenager he was getting mixed messages – toughen up but also talk about your emotions.

“For me personally, I really struggled, because I was the captain of our rugby team, which was the undefeated rugby team all through school, and I felt like I had to live into this identity.”

At the time, Johnson says he didn’t know he could talk about some of the challenges he was going through.

After school he studied psychology and business but felt like the mental health care system and domestic violence work was geared around crisis management rather than prevention and early intervention. Inherited belief systems about what it means to be a man play into these problems, he says.

“What we’re really trying to do is give them a choice.”

When boys are between 12 to 16, they break away from the guidance of their parents and seek mentoring elsewhere, says Johnson. This used to be in villages and communities but in a largely Western world, there’s now no rites of passage and initiation for young men to be welcomed into adulthood, he says.

“We know that when boys are in that age of 12 to 16, that they push boundaries, that they push their relationship with authority, they question their own mortality by doing risk-taking activities and… for thousands of years gone by the elders, the elder men, would take these boys away to overcome a challenge and that challenge, when they did overcome it, the young boy’s identity would die and the man would be born.”

This also happens to be the time when a teenage boy’s brain is most malleable, he says.

The programme also offers young men role models; charismatic men aged 25-35 who range from the hipster to the country bloke, indigenous Australians to refugees, former child soldiers, and men who have been involved in gangs who have turned a corner.

“What we see is these boys are often getting their ideals and their belief systems based off Netflix or social media, Instagram, Snapchat, Facebook, and so for us to give them a space where they can hear the real-life stories of diverse men is incredibly, incredibly important.”

The organisation works in schools, and work as a bridge between the kids and the parents and teachers. They also run camps in the bush that operate as a rite of passage process where the boys hear diverse stories and are faced with a challenge that tests their identity before creating a vision for their future and going through an honouring ceremony where the men honour the men. At the end of their time in the bush the community welcome them back, Johnson says.

The boys come with a range of challenges in 2019, the most obvious one Johnson says relates to technology. Wanting to be connected 24/7 can be a good thing but also a damaging thing, he says.

Discussion around toxic masculinity is having an impact on them too, with many feeling they’ve been labelled unfairly and being shamed in their identity, he says.

“A lot of these boys don’t actually understand what that means so a lot of our role is just explaining well are we saying all masculinity is toxic, no we’re not. I’ll explain that certain components of masculinity might not be supportive to the world we want to create, what are some of those things.”

Understanding that they’re part of a bigger system and power structure that supports men is also important, Johnson says.

Hunter Johnson is the co-founder of the Australian organisation The Man Cave, 2018 Queens Young Leader, and named one of EY's Social Entrepreneurs of the Year.