The government's Zero Carbon Bill is making its way through parliament at the moment, while a growing number of local councils have joined hundreds around the world in declaring a climate emergency and another school strike for climate is planned for September.

Jerry Brown, who ended his fourth and final term as California governor in January, has lead the way in the US on state level climate action in what he says is the absence of national leadership.

His state has had to grapple with an array of environmental disasters - from catastrophic fires, drought, heat waves, encroaching sea levels, and toxic air quality. 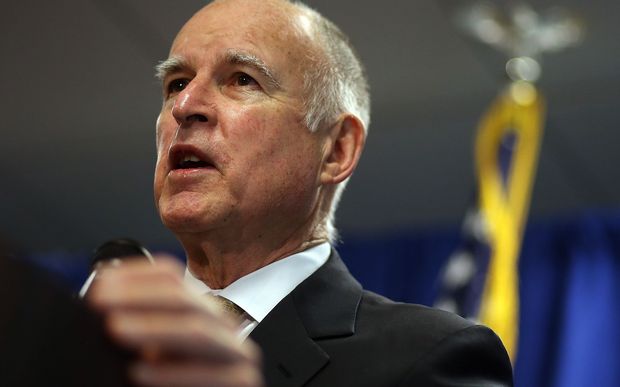 During Brown’s time in office he legislated for clean energy, committed to reducing, by 2030, California's greenhouse gas emissions by 40 percent below 1990 levels, extended measures encouraging businesses to reduce their pollution and approved policies to help encourage transition to electric vehicles.

“China is absolutely crucial, it's the largest polluter, it has the biggest population. And it's also the most productive producer, possibly even innovator, of wind technology and solar technology and increasingly battery technology.

“In the absence of leadership in America, which currently is disabled in terms of climate change by the Trump denial of the very science of climate change, China really has the baton, it has the full mantle of responsibility to drive the world in the right direction, I'd say China, different countries in Europe, maybe the European Union itself, all of this is crucial, and we can only cheerlead from the side lines.”

Human caused climate change is something that we’re all in together, there’s no escaping the desperate situation we face, Brown says.

"This is a good example of Spaceship Earth; we're hurtling through space, our atmosphere above that makes life possible is very thin, it’s being undermined by carbon emissions.

"Below we have our soil, our oceans, and that too is being adversely affected by this changing weather, the global warming, so we're all in it.”

Bur we’re not all taking it seriously, Brown says.

“A lot of people haven't got the message, they’re still into late stage capitalism…..it's late stage capital accumulation, spending, pollution moving about in a mindless way that is absolutely inconsistent with long term human well-being in this world.”

The objection in some quarters that action is too expensive is dismissed as nonsense by Brown.

“All this business about cost, there is so much nonsense, the cost of climate change is incalculable. And so many times more expensive than the do-nothing option, that the troglodytes and climate deniers advocate.”

“We have 20 to 30 million vehicles running around, growing vehicle miles travelled every year, of 340 billion and beyond - 340 billion miles using fossil fuels.

“So, we got to get that transition to hydrogen and electric cars, get land use such that people can walk and bike and take non-carbon emitting vehicles or means of transportation.”

Despite pockets of innovation and change, Brown says change isn’t moving at anywhere near the rate it should be.

We’ve got to step back, take a deep breath, look at what's going on, look at the science and see it's absolutely overwhelming that time is passing, we've got to accelerate.

“And when I say we have to, we may not, the world may just go to hell and that's highly conceivable - in fact you'd have to say it's probable and the only way that might stop it would be climate disruptions that occur and wake up a critical mass of people who bite the bullet and do something, spend the money, make the rules, support the politicians to do what's right.”

Were in the midst of a battle for not just human well-being, but human survival, Brown says.