How to take the conflict out of child discipline

Every parent knows the difficulties of trying to discipline their children and the feeling it's not working properly.

Clinical therapist Anna Martin's new book Listen to me! Taking the conflict out of child discipline aims to provide parents with effective strategies that put listening and the wellbeing of children before lecturing.

She says parents often default to the more punitive discipline they experienced growing up, and in New Zealand in particular, that can lead to a range of disorders later in life. 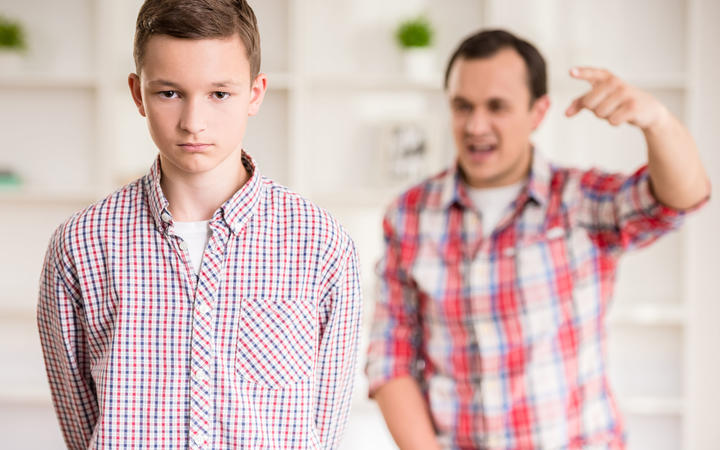 Parents are often unaware of how much they’re influenced by other factors, not just what's happening in front of them.

“We're influenced by our own childhoods, our social-cultural pressures, how we're expected to parent, how we're feeling at the time. Are we stressed or distracted? And then we've also got the patterned behaviour that's been established between parent and child since their birth.”

All of these things have an impact on how parents respond to a discipline situation and often mean their response is misguided, she says.

International research is in agreement that there four key things that parents need to incorporate into their parenting.

“When I interviewed children as part of my PhD thesis they said it's actually okay for mum and dad to tell me off, I expect them to do that because they’re my parents, I just wish they would do it in a calm way. So it’s not threatening for them.”

“They want to feel like they're seen and heard [that] is very important to their development.

Listen to the child

“They want parents to listen to their perspective and that puts fear into parents because they think if they give the child too much of a voice, then they're going to lose control, but that's actually a fallacy.”

Make the child part of the solution

“Children really need to be incorporated into the solution, how do we resolve this? So they then buy into that process,” Martin says.

“We believe that children really should just do as they're told, and children are genuinely naughty, and so that automatically influences how we're going to respond.

“So if we're looking at a situation going, ‘Gosh, you're just such a brat’, we're not going to treat this situation with respect that it actually deserves.

"When they're younger, around the age of two, you're looking to build an understanding between the two of you. So you would model that behavior for them.

"So, you would suggest 'look, I can see this, why don't we try that? You know, so it's a solution that you are respecting the fact that they have a right to be part of that solution.

"So for example, the other day again, I actually shouted my son. I try really hard not to shout at him. It's not something that sits right for me. But when I did, his response to me was 'Gosh, mum, what's happened today? What's going on for you?'

Martin defines discipline as “helping children learn how to live in this world and be a constructive and productive adult".

“Recognising them as beings now, they are who they are right now, and helping them learn and to manage and notice their emotions.

“So it's about helping them be socially adaptable and flexible in different situations.”

This doesn’t mean always being permissive, she says.

"There are boundaries and children need to understand those boundaries."

They also need to learn how to how to experience frustration, Martin says.

"But the important part of the process is it's transparent and respectful and that's the difference.”

“You can say to someone 'hey, listen, we had an agreement here, and that's been broken, I don't want to take this digital stuff away from you, but I'm going to have to because we do need to learn how to operate in this world'.”

Children need to be involved in both the process and the solution, and will then more likely take on board what the parent is trying to teach them, she says.

Avoid jumping to conclusions, which children – like adults – find frustrating, she says.

“They just want to have a voice and then you know that they're more likely to calm down.”

Martin suggests taking time to repair a situation that has got out of control.

'It's really important to go and check in with the child – 'how are you feeling about this?' – and actually having a wider conversation.”

This will help prevent children from internalising the message that they are mean or bad people, Martin says.

You can find more interviews about navigating family life here.