Teen tramper: Walking the length of the South Island

Last summer, after she finished university, and while many of her friends headed for the beach, 17-year-old Maddy Whitaker set off to walk the length of the South Island.

She’d won an expedition scholarship from the Federated Mountain Clubs and decided to set out on the 1400 kilometre journey over 80 days. 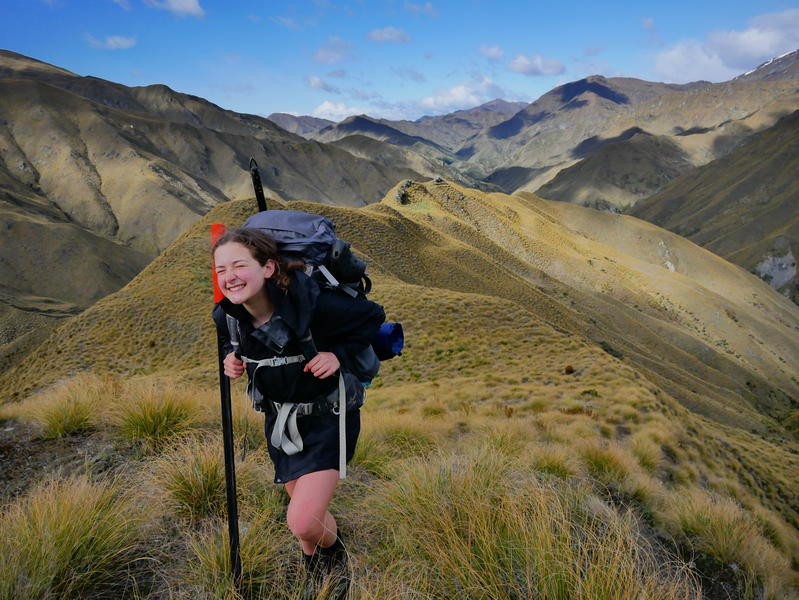 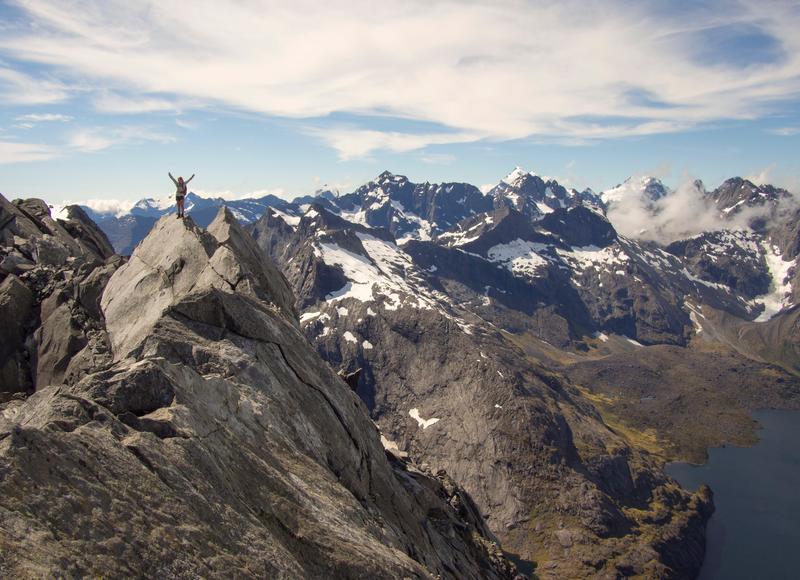 Scrambling along the ridge to Barrier Peak, Fiordland, Lake Adelaide below, taken by Rowan Cox 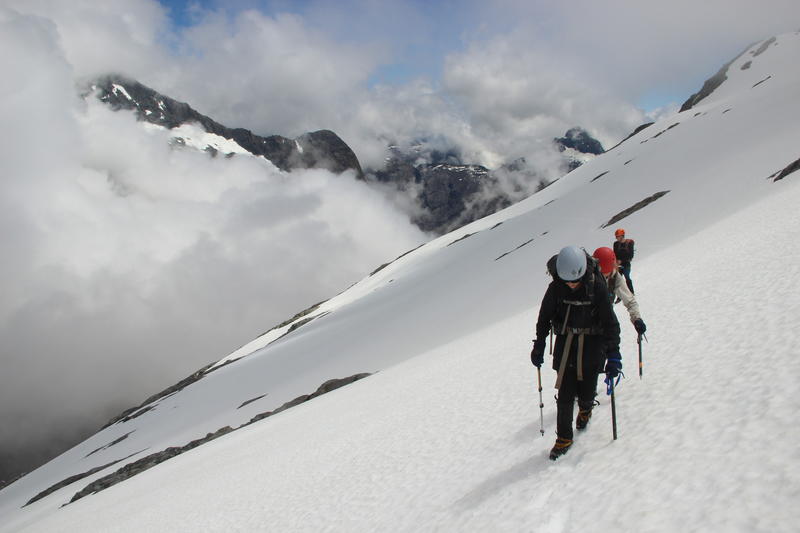 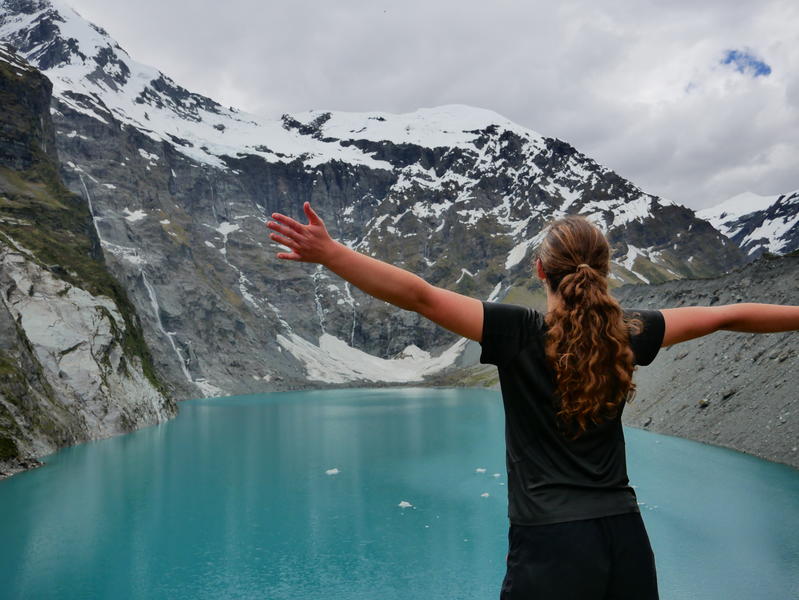 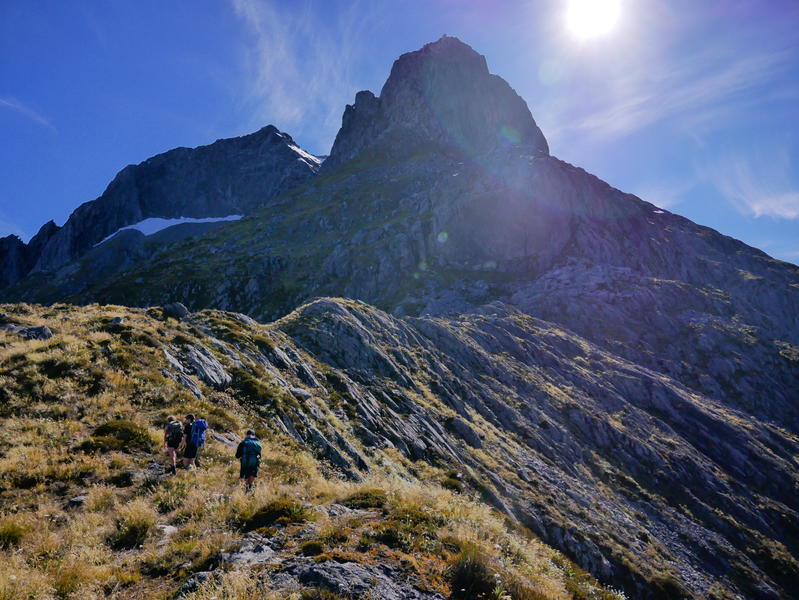 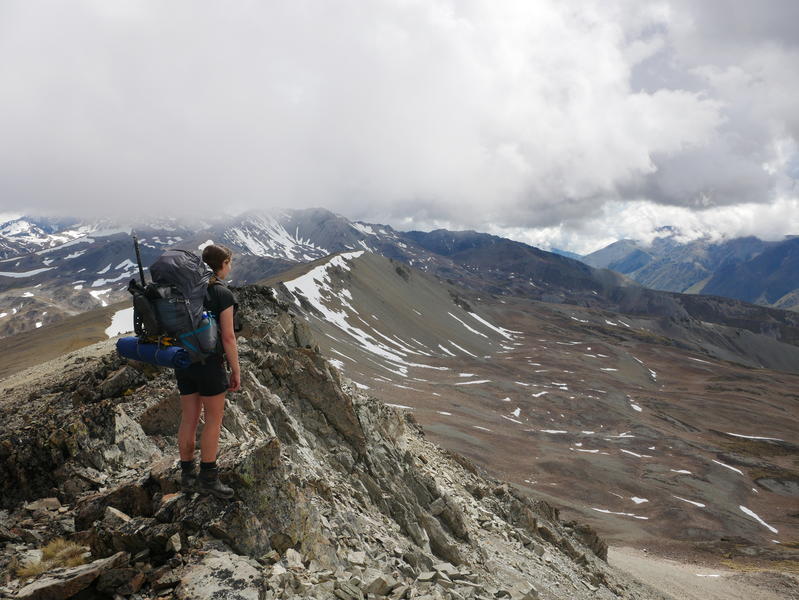 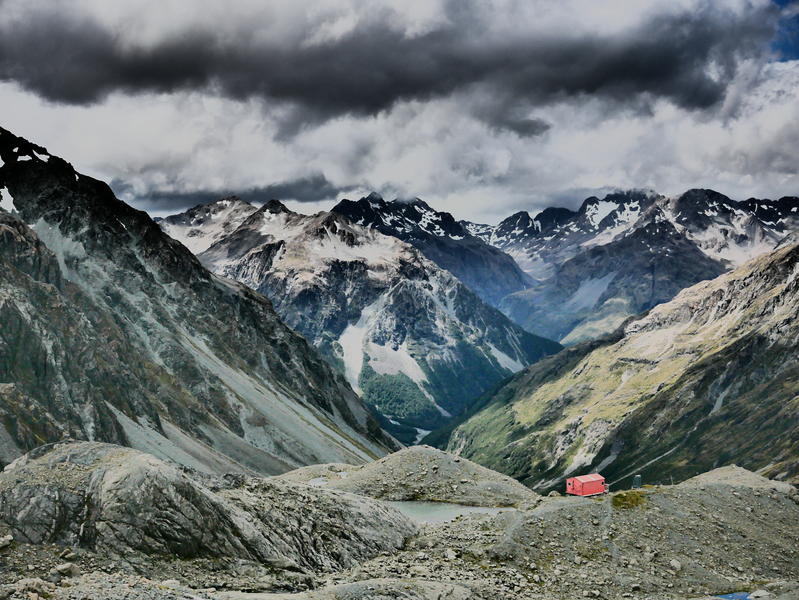 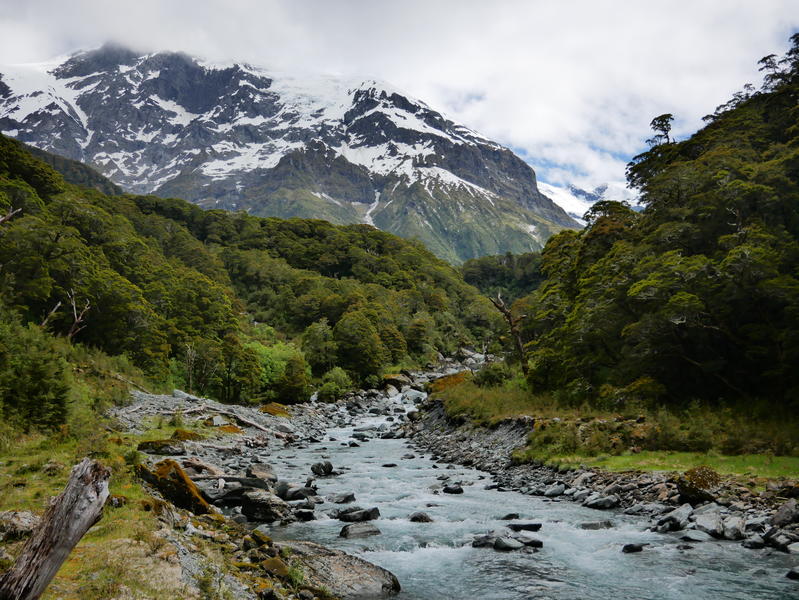 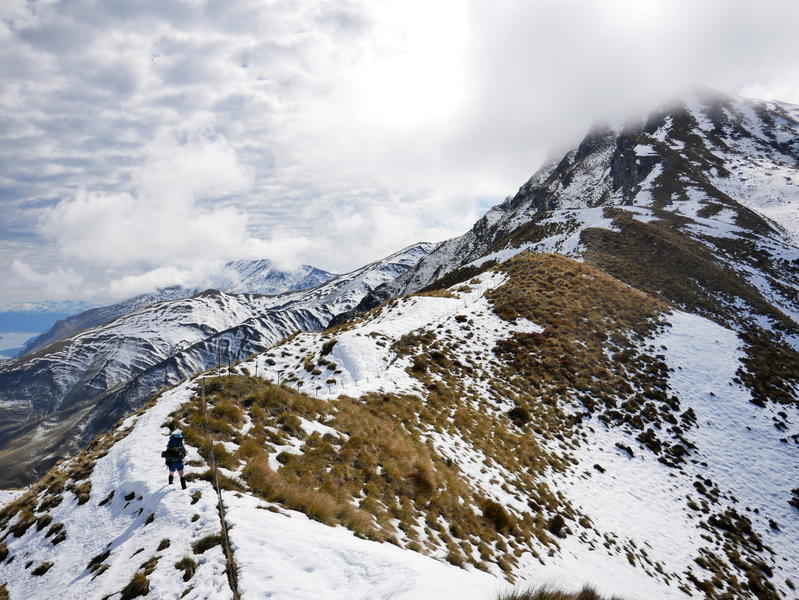 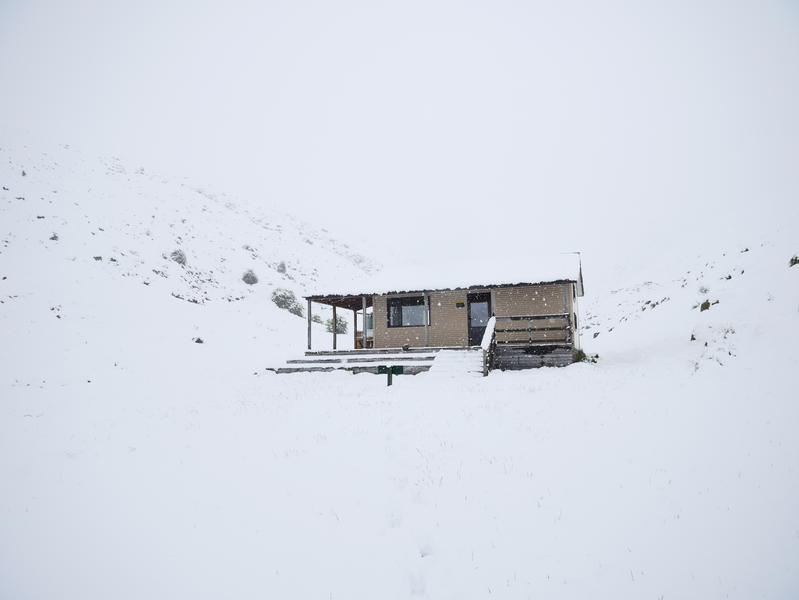 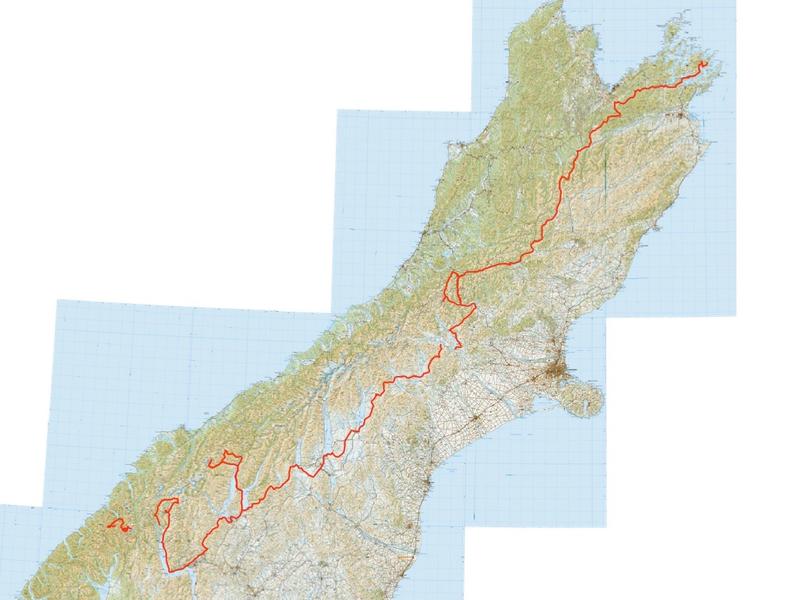 Whitaker had never been tramping until she took an Outward Bound course last January but many of her friends are keen trampers and she says exploring with them fast-tracked the learning process. In the lead up to her epic journey, Whitaker went out every weekend on the hills.

“The actual trail itself isn’t too difficult but I actually added on some extra side explorations as I went up to make it more of a challenge.”

She used the Te Araroa as a pathway to link up the national parks across New Zealand – she’d walk between them and then do a side expedition in the national parks themselves for up to seven days. “So, exploring all of the South Island, but doing it on foot-power.”

Nights were spent between sleeping in a tent, back country huts and sleeping under the stars.

A fair bit of planning goes in to a two-and-a-half-month trip; “While there’s some sort of small towns that you go through that you can restock food, there was places where it didn’t have that option, so I’d have to send parcels ahead. Just sort of understanding the time-frame that you’re going to be going for, understanding how your pace will correlate to the terrain so you can know how much food to bring. It was quite a challenge.”

She says navigating the tracks were for the most part, a breeze.

“When you’re on the actual Te Araroa it’s really well signposted with markers and whatnot, but a lot of the side trails weren’t and I did some off-track stuff as well so just carrying a map and compass and then amazingly cellphones these days… you can use them as a GPS even when you’re out of cellphone reception so that was my back up option if everything when bad but it didn’t thankfully.”

One of the reasons Whitaker chose the South Island section of the tramp, rather than hitting the track in the north, is because for the most part it’s off the road.

“You felt like you were pretty isolated because you come into towns every seven to ten days and you wouldn’t really come across roads in between that so it did feel pretty isolated and that was really special.”

The weather was, for the most part, kind to Whitaker and the trampers who joined her on parts of the journey – although there were dramatic days.

“On the Motutapu trail between Arrowtown and Wanaka we saw that there was some not great weather coming, but we thought ‘oh it’s probably just rain’.”

When the weather reached the group that rain became five days of snow.

“We were only at about 600 metres, so not particularly high but we had more than 30cm of snow and it was continuously blizzarding. That was pretty exciting – getting a bit of a winter wonderland.” Heat waves of 35 degrees were the other extreme.

When you’re walking for 80 days, there’s bound to be times when you feel lower. Whitaker says everyone seemed to go through their lowest day on the same little section of track.

“It just keep going on and on and I’d been quite unwell and was throwing up on the side of the track and that was probably my lowest day, just keeping on going when you kind of just want to stop and not keep going.”

As well as an epic experience, she also used the expedition as a means of raising funds for disadvantaged youth to participate in Outward Bound programmes.

And she’s raised $1200 to give others the chance to go on the course that she says gave her a massive self-esteem boost.

“Outward bound is a really special place, I saw a lot of people there really grow, both in confidence and in their capacity to help others as well and I’ve seen this continue beyond the Outward Bound course long-term.”

She says you come out of the course thinking you can do anything you put your mind to.

“Walking the Te Araroa, it kind of sounded like it was something that was quite ridiculous, this sort of dream that came out of…as soon as I got home from Outward Bound I said to mum, I want to walk the South Island… you have the courage to go after those crazy dreams.”