The myths and mythology of the Anzac Biscuit

Butter, golden syrup and coconut are key ingredients of the quintessential Anzac biscuit - but also key to debunking some of the myths surrounding its origin, notably that they were made by soldiers at the front in World War I or sent to them by wives or girlfriends at home.

In fact, they were made by the women.

Dr Joanna Cobley is based at the University of Canterbury and has researched the Anzac Biscuit and the folklore surrounding it. 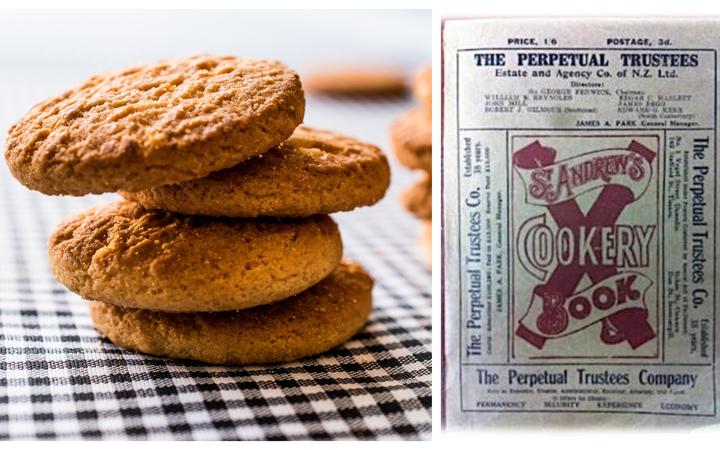 She says while there’s a fragmented historical record, there are a number of possibilities.

New Zealand women who volunteered during the war published cook books with recipes that they slapped the word Anzac in front of, says Dr Cobley.

These recipes were also published in church and community newsletters.

“That’s what I like to call the protean Anzac moment, it has roughly those ingredients and the method that we think of Anzac biscuits today.

“What I saw in the 1920s and 40s, a lot of those women that did the cookery demonstrations they did Anzac biscuits and what you see in the interwar period is an emphasis on health, so there might be lots of wholemeal flour and coconut enters the recipe and lots of walnuts because people will have had them, or somebody would have had them in their garden.”

The biscuits seemed to have disappeared somewhat in the post WW2 – 1960s period as other things started to happen in the food scape, she says.

In the 1970s the recipe was simplified and appeared in school cookbooks.

“That’s quite important because teaching children is a really important method of cultural transference.”

Now you can get vegan biscuits and chocolate dipped ones too, Dr Cobley thinks there’s still room to grow.

“I can still see further information happening… with increased value in the therapeutic value of CBD (cannabidiol) just imagine, this is like a Canzac biscuit recipe emerging, for adults only of course, you add CBD oil.”

This recipe for 'Anzac Crispies' is from 1919 and included in the 1922 edition of the St Andrew's Cookery Book.

Put dry ingredients into basin, add melted butter with treacle and hot water. Mix all together, bake in small pieces, flattened out, in moderate oven.