Susan Orlean and the mystery of LA's Central Library fire

Susan Orlean had just moved to Los Angeles when she was offered a tour of the downtown library.

She fell in love - it's a magical place.

It’s whimsical building, she says. “A kind of hybrid of Egyptian style and art deco and something that doesn’t have a name. It’s a very imaginative building.

”What Orlean would come to learn about the library's history led her to the subject of her latest novel The Library Book. 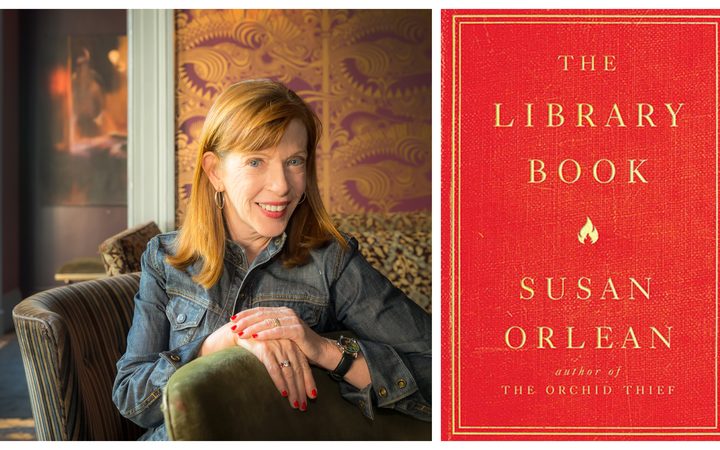 Stopping in the fiction section, the man giving the tour pulled a book off the shelf and took a deep whiff – ‘you can still smell the smoke in some of them,' he said.

Orlean had no idea what he was talking about – did people used to smoke in this library? she asked.

It was in this moment she learnt about the arson fire of 1986, and the seven years the library had to shut as a result.

“It absolutely captured my interest and my attention.”

She describes it as the moment her novel The Library Book was born.

“Had he not sniffed the book, even though I was very interested in libraries and I’d sort of toyed around with the idea of writing a book about a year in the life of a big city library, I didn’t yet have a sense of what narrative could propel me through an entire book.”

Orlean is known for her detailed research and The Library Book is no different.

At the turn of the century, LA didn’t have a standalone library – at one point it was above a department store. It was about a hamburger and cheese market at another point.

In the 1920s the people of LA voted to build a library, but this became inadequate over time.

For twenty years there was a fight, with some people wanting to tear down the building, others wanting to keep this part of history.

The 1986 fire was the largest library fire in US history, a devastating loss to the city of Los Angeles.

It was a fire that started very slowly, a fire alarm went off at 10am and everyone thought it was a false alarm – including the fire department who checked the building.

On checking a second time, after not being able to reset the alarm, they found a small amount of smoke coming from a stack of fiction books.

“Within a few minutes, that little bit of smoke erupted into a massive fire that was quite uncontrollable and unfortunately in a library you can imagine there’s an unlimited amount of fuel.”

The fire was hot enough to melt steel and raged for seven and a half hours. It burned through all the fiction from letters A-L, all science books, all theatre books, cook books and art books – 400,000 books turned to ash.

“Whole sections of information were gone.”

What is amazing though, Orlean says, is 700,000 books were damaged and charred in the fire and over the next six years - in what was the largest book salvaging ever undertaken - many of these were recovered.

Chapters are demarcated in The Library Book using index cards – the universality of libraries is evident even within its pages.

“It’s really amazing how universal libraries are, ever since books have been written they’ve been collected in libraries.

If you went to the library in the United States and a library in Africa, while the building itself might look different, the idea and the mission and the organisation of the library would be very much the same.”

It’s the sense that we’ve devised a way to keep the thoughts and stories of civilisation in an orderly fashion to become a global continuity, she says.

She says defying most of the logics of book structure, the book has several protagonists.

“There were a number of people who became incredibly central to the story. When I heard that it was an arson, the first thing that I wanted to know was who did it and when I realised that the prosecution of this young man had taken many complicated twists and turns I wanted to follow that narrative.”

That young man was Harry Peak, who fanciest himself on the brink of stardom.

He did odd jobs around the city, barely scrapping together a living. A delightful young man by all accounts, but his one downfall was he was a pathological liar.

“The way he got himself messed up with the investigation of the fire was he began telling people that he had started it. The problem with someone who is known to be a liar is you never know when they’re telling the truth.”

As a result, the investigation took many twists and turns.

Another one of these characters is Mary Foy, who headed the library in 1880.

“At a time when women were not allowed to have their own library cards, the city hired as their head librarian, a young 18-year-old girl. She was so young that her father would walk her home from work.”

The men at the time would come to the library would come and play poker, or checkers, and call on Mary Foy to preside over some of their games.

“She was a bit of a trailblazer and interestingly LA had a number of women run the library in those very early days when we now think of libraries as being predominately women but in the early days of libraries in this country, most librarians were men and most libraries were patronised by men because women weren’t allowed to use the main room.”

Orlean says she's often drawn into a story because a person at the centre of it is charismatic and maddening. She's interested in specific events that become portals into a whole world. The 1986 fire was a portal into the growth of LA as a city and the development of libraries.

Susan Orlean is heading to New Zealand as part of the Auckland Writers Festival.